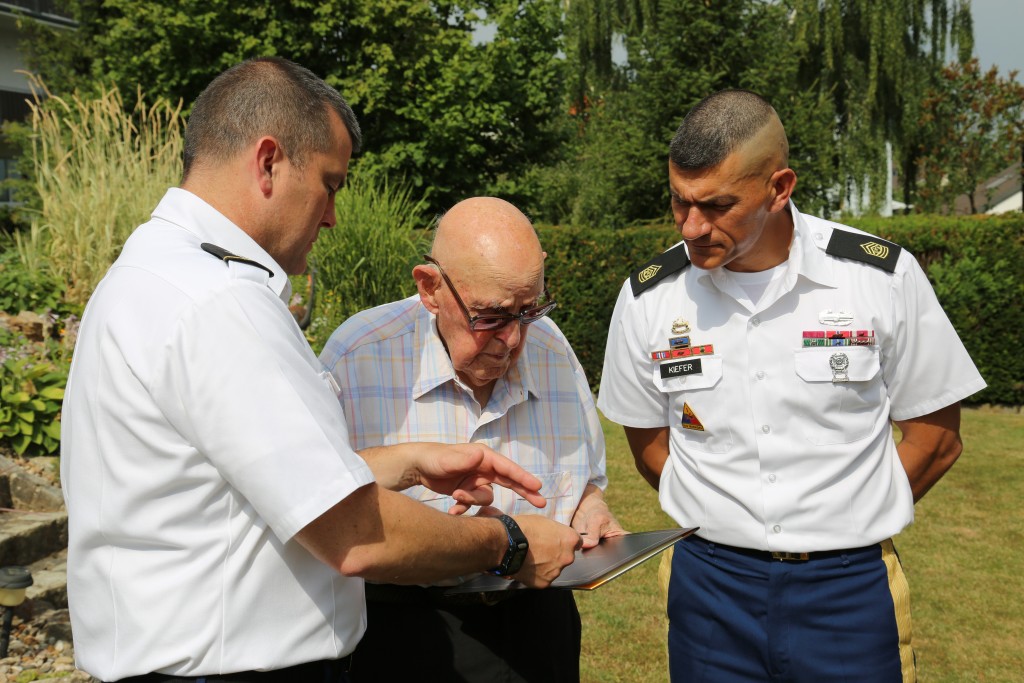 Eugene Green received the certificate signed by President Barack Obama thanking him for his service to the country.

On the certificate is written the following:

“You have helped maintain the security of the nation during a critical time in its history with a devotion to duty and a spirit of sacrifice in keeping with the proud traditions of military service.”

During World War II, Green served on the Burmese/China border, assisting with the effort of constructing the Ledo (later Stilwell) Road.

Green’s military service lasted more than two decades, during which he served in India, Korea and Germany. He served at several posts in the U.S., including Fort Dix and Camp Kilmer, New Jersey and Fort Meade, Maryland. It was during his service that Green gained proficiency in speaking both German and Hindustani.

After completing his military service, he lived in Bamberg and worked in the Post Exchange at Erlangen, Germany. He made his life in Bamberg, where in 1969 he and his wife built a house. Green, a man in his mid-90s and a widower, still lives in the same house with his daughter.

While he lived in Bamberg, Green worked at a commercial logistics company and drove a snack truck.

“He’s a proud veteran, who served his country faithfully,” said Kiefer. “He showed an affinity for Germany – stayed over here because of that relationship. You still see remnants of that relationship today in that partnership between Americans and Germans.”

Before presenting Green the certificate of appreciation, the group from USAG Ansbach sat with Green for a leisurely conversation and food and drink.

During the conversation, Kiefer asked Green whether he had any advice for Soldiers today.

“He could be 40-something,” said Kiefer while laughing.

“Do the best you can,” said Green.

Benson and Kiefer presented the award to Green, and Benson handed Green a command coin.

“On behalf of all the U.S. forces here, we want to thank you for your service and for all you’ve done for our country,” said Benson to Green when he presented the certificate to Green.

The certificate came about when the USAG Ansbach Retirement Services Office sought to recognize different military retirees in the area. When Green could not make the Retiree Appreciation Day event May 21, Benson and Kiefer decided to meet Green at his home.

To see the story as it appears through the Army News Service, visit www.army.mil/article/152587.