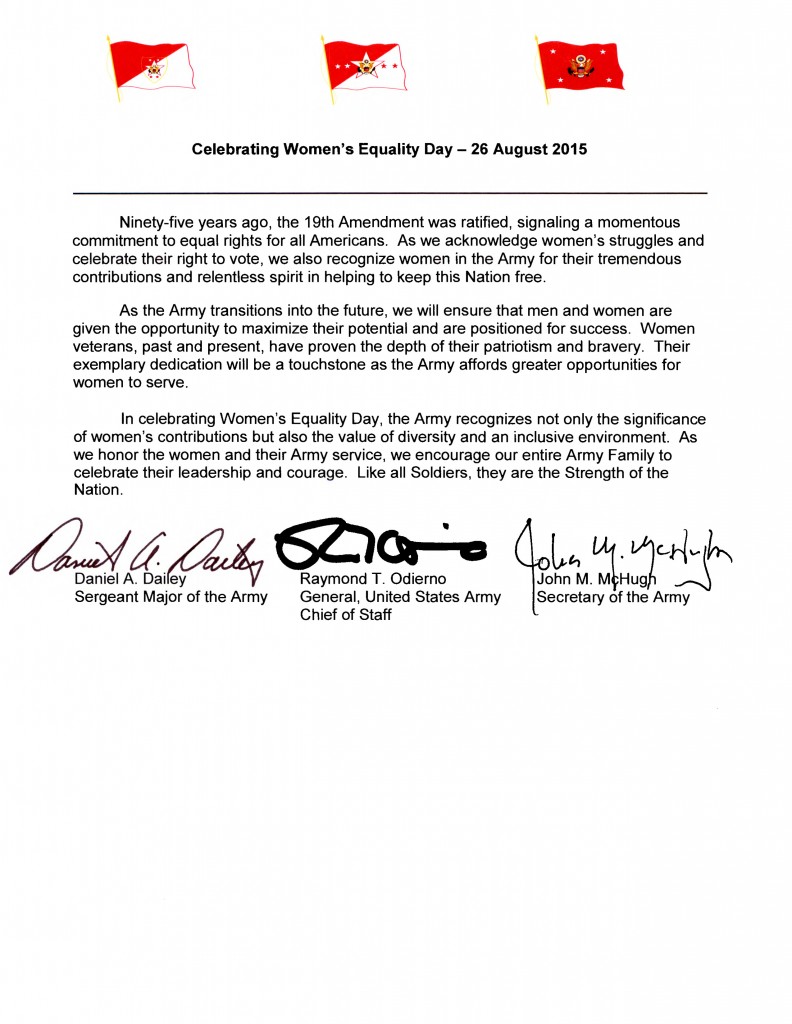 Women’s Equality Day Aug. 26 celebrates the anniversary of the passage of the Nineteenth Amendment into law in 1920. This amendment prohibits the denial of any U.S. citizen their right to vote because of their sex, and thus it gave women in the U.S. the right to vote.

To celebrate this momentous anniversary, John M. McHugh, secretary of the Army; Gen. Raymond T. Odierno, chief of staff of the U.S. Army; and Sgt. Maj. of the Army Daniel A. Dailey signed a letter on the subject. You can read it in the image here or in the text below:

Ninety-five years ago, the 19th Amendment was ratified, signaling a momentous commitment to equal rights for all Americans. As we acknowledge women’s struggles and celebrate their right to vote, we also recognize women in the Army for their tremendous contributions and relentless spirit in helping to keep this Nation free.

As the Army transitions into the future, we will ensure that men and women are given the opportunity to maximize their potential and are positioned for success. Women veterans, past and present, have proven the depth of their patriotism and bravery. Their exemplary dedication will be a touchstone as the Army affords greater opportunities for women to serve.

In celebrating Women’s Equality Day, the Army recognizes not only the significance of women’s contributions but also the value of diversity and an inclusive environment. As we honor the women and their Army service, we encourage our entire Army Family to celebrate their leadership and courage. Like all Soldiers, they are the Strength of the Nation.

To learn more about Women’s Equality Day, visit last year’s Stand-To on the subject at www.army.mil/standto/archive_2014-08-26.