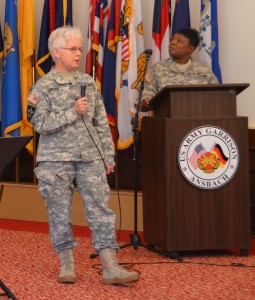 Mitchell Jones, deputy to the garrison commander, spoke at the event.

“The social, economic and political contributions of American women profoundly affected the course of this nation,” said Jones. “The defiant, can-do spirit that moved millions to seek suffrage still runs in the veins of American history.”

The event, organized by the garrison’s and 12th CAB’s equal opportunity advisers, featured Col. Rebecca R. Tomsyck, the officer in charge of behavioral health at the Katterbach Army Health Clinic.

Tomsyck recounted women’s contributions in the U.S. military, the history of the women’s suffrage movement, and the importance of registering to vote as an absentee. Tomsyck made her presentation interactive, quizzing the audience on different statistics relating the women’s involvement in the military and asking audience members for what freedom means to them.

She also informed the audience of the Federal Voting Assistance Program, a program that assists service members, their Families and citizens living overseas to vote.

“This is how you register to vote overseas,” said Tomsyck. “You can register for an absentee ballot, and they will send you one. And then you just vote and send it back to them. When you send your ballot back to them, postage is free. They pay for it.

“There’s no excuse,” continued Tomsyck. “The government has made it very, very simple.”

After Tomsyck had spoken, performers from USAG Ansbach’s Terrace Playhouse performed a living history reading of the decades-long movement for women’s suffrage. Victoria Hanrahan led the players, who read the real correspondence of those involved in the struggle.

“I didn’t realize the impact that the 19th Amendment had on American history,” said Hanrahan on researching for the play.

The other players were members of the Ritscher Family.

“We learned a lot,” said Margi Ritscher, the mother. “Getting to step inside the heads of these individuals and not just see them as overview was an experience.”

“I appreciate the opportunity of doing something like this,” said Benedict Ritscher, the son.

“It ran in the family,” said Elisabeth Ritscher, the daughter. “A daughter would take over where a mother had started. It wasn’t a person here, a person there. It was an entire network of people that combined efforts.”

To read the story as it originally appeared on the Army News Service, visit www.army.mil/article/154668.