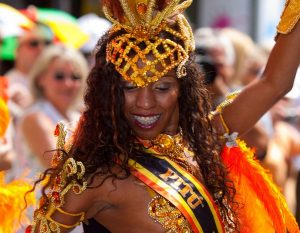 Weinfest in Nürnberg
The traditional Nürnberger Weinfest takes place on Jakobsplatz July 7 through 17; a different live band entertains the visitors every day. To learn more about the event, visit Nürnberg Weinfest

Kirchweih Ansbach
The traditional Ansbach Kirchweih fest takes place at the Festplatz (Nürnberger Strasse) July 7 through 13; the fest will be officially opened on Friday night with the tapping of the first keg at 7 p.m. At 5 p.m. a Kirchweih tree is put up on Martin-Luther-Platz downtown Ansbach, followed by a small parade towards the fest area. On Sunday afternoon at 2 p.m. a large fest parade with more than 90 participating groups will make its way to fest arena via Schlossplatz; this parade takes place only every four years.

International Samba Festival in Coburg
The city of Coburg turns into a Samba town during the popular Samba festival on July 8 through 10; more than 150,000 visitors enjoy more than 30 groups performing Latin American music, dancing and artistics during the three-day festival, with a parade on Sunday at 2 p.m. as one of the major highlights. For more details and ticket information, visit Samba Festival

Salsa in the Park
Fans of Salsa, Bachata, Kizomba and other similar music can dance the night away at the Stadtparkcafe in Fürth (Engelhardtstraße 20) on July 13 and 20, from 8 to 11 p.m. Check ahead to make sure the event takes place (weather conditions, etc.) at Salsa im Park 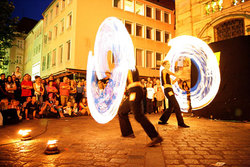 Kinderzeche in Dinkelsbühl
The Kinderzeche in Dinkelsbühl, a historical play and parade that tells how a group of children saved the town from being plundered by the Swedish Army in 1632, is scheduled for July 15 – 24. Theater plays, parades, Swedish army camps and plenty of other entertainment are taking place inside the walls of the historical city.  A detailed program scheduled is available at Kinderzeche

City moat fest in Ansbach
Ansbach is hosting a city moat fest – Stadtgrabenfest – every year with many events and activities for adults and children, like face painting, bouncing castle, live music, food and drinks. The fest takes place in the moat near the Carolinum school on Jahnstrasse/Platenstrasse on July 15 and 16 from 10 a.m. to 7 p.m. To learn more, visit Stadtgrabenfest

Altstadtfest – Herrieden
The Altstadtfest (old town fest) on July 16 and 17 in Herrieden is a traditional fest with tables and benches set up all through town between the booths selling local delicacies and the entertainment section with live music. Sunday is also open store Sunday with shops open 1 – 5 p.m.

Ambassadors of Music in Rothenburg
The “Sound of America” performance is a special musical event in Rothenburg: once a year the best music students from different US states show off their talents in a summer tour of Europe, stopping off at Rothenburg’s Market Square during their trip.
This year’s tour brings the following state representatives there:
July 8: Illinois; July 9: Texas Lone Star; July 11: Wisconsin; July 14: Kentucky; July 15: West Vancouver Youth Band; July 17: Iowa; July 20: Minnesota; July 23: Washinton; July 26: New England/Nevada; July 29: Virginia; Aug. 1: California. To learn more about the concert series, visit Rothenburg or call the Rothenburg Tourist Office at 09861-404 800

State Garden Show in Bayreuth
Every year the state of Bavaria hosts a garden show in a different location; landscapes are transformed into beautiful garden scenes, attracting hundreds of thousands of visitors every year. This year the “Landesgartenschau is located in Bayreuth, capital of Upper Franconia. The show is open daily 9 a.m. to 7 p.m. until October 9 along the Roter Main river (Friedrich-Ebert-Straße/Äußere Badstraße). Day tickets are available for 16 euros for adults, an annual pass is 100 euros; children 7-17 years old pay 3 euros per day or 25 for the annual pass. Visitors arriving by train at the Bayreuth Bahnhof can use a free shuttle to the location and will receive a 2 euro discount on their (adult’s) ticket by showing the train pass. To learn more about the garden show, visit Landesgartenschau 2016.

Volksmarch Hiking Days
Volksmarches or “Internationale Wandertage” are a form of non-competitive physical fitness training, which takes the participants through some of the most beautiful landscapes in Germany. The walking distance varies from 5 to 10 or 20 kilometer routes on scenic trails through forests, along rivers and lakes or around historic sites. There is no set start time, but a window of time for hikers to start the route, and finish it at their own pace. Trails are typically marked well along the way. Many trails are stroller-friendly and provide great opportunity to explore the countryside. After the walk the local hiking clubs usually offer food and drink in a hall or tent, sometimes even at a half-way point. Avid hikers can get a hiking passport stamped each place they participate, and many clubs reward their visitors with a small token.

Upcoming Volksmarch events in Franconia and the region:

* July 9 and 10 in Pottenstein (Fränkische Schweiz): Distances are  5, 10 and 20 kilometers. Starting times are 6 a.m. to noon on both days, start location is Graf-Botho-Schule, Bayreuther Berg 7, 91278 Pottenstein. To learn more, visit Volksmarch Pottenstein