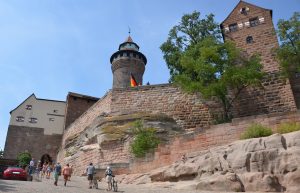 Weinfest in Nürnberg
The traditional Nürnberger Weinfest takes place on Jakobsplatz through July 17; a different live band entertains the visitors every day. To learn more about the event, visit Nürnberg Weinfest.

Kinderzeche in Dinkelsbühl
The Kinderzeche in Dinkelsbühl, a historical play and parade that tells how a group of children saved the town from being plundered by the Swedish Army in 1632, is scheduled for July 15 – 24. Theater plays, parades, Swedish army camps and plenty of other entertainment are taking place inside the walls of the historical city.  A detailed program scheduled is available at Kinderzeche.

City moat fest in Ansbach
Ansbach is hosting a city moat fest – Stadtgrabenfest – every year with many events and activities for adults and children, like face painting, bouncing castle, live music, food and drinks. The fest takes place in the moat near the Carolinum school on Jahnstrasse/Platenstrasse on July 15 and 16 from 10 a.m. to 7 p.m. To learn more, visit Stadtgrabenfest.

Altstadtfest – Herrieden
The Altstadtfest (old town fest) on July 16 and 17 in Herrieden is a traditional fest with tables and benches set up all through town between the booths selling local delicacies and the entertainment section with live music. Sunday is also open store Sunday with shops open 1 – 5 p.m.

Burgfest in Nürnberg
The Kaiserburg (castle) in Nürnberg is site of a Burgfest on July 16 from 9 a.m. to 10 p.m. with many attractions like special guided tours, medieval dance performances, free admission to some of the features (tower, well) and fireworks at the end of the day.

Ambassadors of Music in Rothenburg
The “Sound of America” performance is a special musical event in Rothenburg: once a year the best music students from different US states show off their talents in a summer tour of Europe, stopping off at Rothenburg’s Market Square during their trip.
This year’s tour brings the following state representatives there:

To learn more about the concert series, visit Rothenburg or call the Rothenburg Tourist Office at 09861-404-800.

Salsa in the Park
Fans of Salsa, Bachata, Kizomba and other similar music can dance the night away at the Stadtparkcafe in Fürth (Engelhardtstraße 20) on July 20 and 27, from 8 to 11 p.m. Check ahead to make sure the event takes place (weather conditions, etc.) at www.salsa-im-park.de. 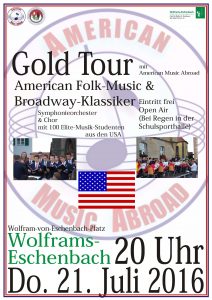 American Music Abroad in Wolframs-Eschenbach.
The town of Wolframs-Eschenbach hosts a group of American music students for a concert every year. The concert is admission free, chairs are set up in front of the Rathaus (city hall) for anybody who would like to listen. This year the concert is scheduled for July 21 at 8 p.m.; in case of inclement weather the concert takes place in the gym on Steingrubenweg 3.
American Music Abroad was founded in 1975 by a high school band director and his wife to fulfill their dream of sharing their love of Europe with high school students, college students and adults. Students are carefully selected on the basis of recommendations from their school directors and/or musical achievement demonstrated on audition recordings. Musicians convene at a college for a pre-tour orientation and rehearsal session which includes an introduction to European art and architecture and guidelines for touring. Tour destinations include Austria, Belgium, Croatia, Czech Republic, England, France, Germany, Hungary, Ireland, Italy, Luxembourg, Scotland, Slovenia, Switzerland and Wales.

Deep South Louisiana – Concert in Hilpoltstein
Zydeko Annie and her Swamp Cats are performing Cajun and Zydeco music of southern Louisiana in the Residenz Hilpolstein (Kirchenstein 1) on July 23 at 8 p.m.

Klassik Open Air: Family Concert in Nürnberg
For many years the classic open air concerts at the Luitpoldhain in Nürnberg have been an event where family and friends get together to sit and enjoy music and a picnic “al fresco.” This year’s dates and times are July 24 at 11 a.m. and 8 p.m. and August 4 at 8 p.m. The event is free and especially intended for people who might not normally listen to classical music. As there are about 100.000 people attending this event, it is definitely recommended to use public transportation. The orchestras, the Staatsphilharmonie Nürnberg (July 26) and the Nürnberger Symphoniker (Aug. 6) will play in (almost) any weather, unless there is a storm or other very inclement weather. To learn more go to www.klassikopenair.de.