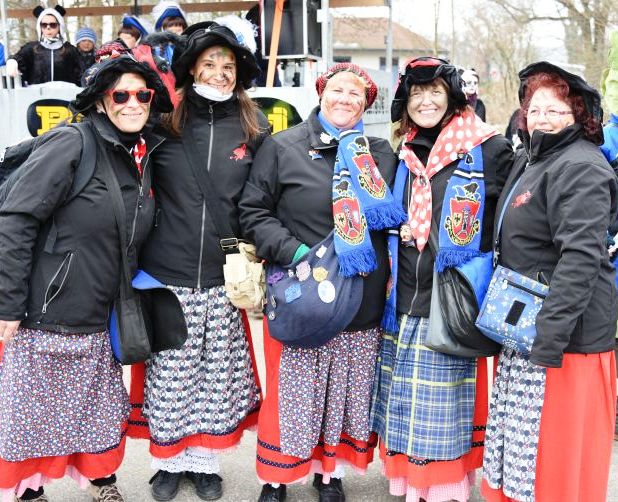 The long Fasching weekend starts on Thursday with Altweiberfasnacht. (Photo courtesy of Schwabanesen)

Toon Walk in Nürnberg
Larger than life comic personas like Bugs Bunny or Homer Simpson are parading through downtown Nürnberg on Jan. 31, celebrating the International Toy Fair that is taking place simultaneously at the Messezentrum Nürnberg. The Toon Walk starts at Pfannenschmiedsgasse (near Lorenzkirche) at 11 a.m. with a show program, games, face painting and more going on all day until 5 p.m. To learn more, go to Toon Walk Nuernberg

Kneipenjagd in Rothenburg
Rothenburg’s annual Kneipenjagd (pub crawl) takes place in several pubs and restaurants around the city on Jan. 30, starting at 8 p.m. Visitors buy one ticket for 12 euros and have access to all locations. To learn more, visit Kammerevents

Kinderfasching in Nürnberg
A Kinderfasching, a carnival party with music and games for kids, takes place in Nürnberg at the Sportgaststätte SV Nürnberg Reichelsdorf (Schlößleinsgasse 9, 90453 Nürnberg) on Jan. 31 at 2:30 p.m. Admission is 3 euros, to learn more, visit Kinderfasching Nürnberg

Chinesenfasching in Dietfurt
The traditional Chinese Fasching in Dietfurt is a popular event in the region. It always takes place on “nonsense Thursday,” which falls on Feb. 4 this year. The town criers, called “Maschkaras,” wake up the town at 2 a.m. with lots of noise. The party downtown on the stage in front of the Rathaus (city hall) starts at 1 p.m.; at exactly 1:61 p.m. the parade begins to move from Industriestrasse through town towards the town center, where the annual proclamation of the emperor is held. For more details check out Chinesenfasching Dietfurt or Chinesenfasching

Lichtmess Markets
Lichtmess (Candlemass) markets are scheduled for Feb. 6 in Heilsbronn and on Sunday, Feb. 7, in Neustadt a.d. Aisch, Gunzenhausen, Colmberg and Weissenburg.

Open House at the Exotic Animal Resort in Ansbach
The mini zoo for rescued tigers and other exotic animals in Ansbach-Wallersdorf is hosting their monthly open house on Sunday, Feb. 7 from 1 to 5 p.m. Guided tours take place every full hour, tiger feeding time is 5 p.m. in the tiger house. Visitors will be well taken care of with warm beverages, bratwurst and waffle; also for sale will be their calendar for 2016. Admission is free, but donations are always welcome. To learn more, visit Raubtier-und Exotenasyl – Ansbach Wallersdorf

Nürnberg Fasching Parade
The Nürnberg Fasching parade, the oldest of its kind in the world, leads 49 decorated wagons and more than 3000 participants through the city on Sunday, Feb. 7, beginning at 1 p.m. The route takes the parade from Am Stadtpark to Pirckheimerstrasse, Bayreuther Strasse, Rathenauplatz, Laufer Tor, Innere Laufer Gasse, Theresienplatz, Obstmarkt, Museumsbrücke, Königstrasse, Kaiserstrasse, Josephsplatz and finally Vordere Ledergasse. The best strategy to watch the parade is to pick a spot along the route and wait for the fun to come to you. For more details, go to Fastnachtszug Nuernberg

Fasching Parade in Mitteleschenbach
Considered the largest of its kind in West Middle Franconia, a Fasching parade takes place on Sunday, Feb. 7 in Mitteleschenbach, starting at 2 p.m. Many groups with decorated wagons, marching groups and bands are expected in this traditional event. To learn more, go to Die Moenchswaldfuechse

Fasching Parade in Ornbau
A traditional Fasching parade takes place in Ornbau on Feb. 7, starting at 1:30 p.m. at “Am Kalkofen” and moving through town to the Stadthalle. More than 30 decorated wagons and music groups are participating in the event.

Kinderfasching and Parade in Ansbach
Ansbach’s youth participates in a parade on Rosenmontag, Feb. 8, through the old part of town. Children in costumes who would like to tag along assemble at 2:15 p.m. at the Martin-Luther-Platz. A percussion group leads the kids through town, ending up at the Onoldiasaal (Nuernberger Str. 32) where a party with music, clowns, magicians, face painting, games and much more takes place (ending at 6 p.m.). To learn more, visit Kinderfasching Ansbach

Rock Oldie Fasching at Grüne Halle in Fürth
For a fun “Rock Oldie” Fasching party check out the Grüne Halle in Fürth (Krautheimer Strasse 11) on Feb. 8, starting at 6 p.m. (doors open at 5 p.m.) A cover band will play music from the 60s, 70s and 80s; a large dance floor provides plenty of room to move and groove. For details and ticket information go to Gruene Halle

Fasching at the Zoo
The Nürnberg Tiergarten celebrates Fasching on Feb. 8 and 9 during normal opening times. Every child dressed as a zoo animal enters for free. Children under 14 years must be accompanied by an adult. To learn more, go to Tiergarten Nuernberg

Fasching in Fun Park Zirndorf
The Playmobil Fun Park in Zirndorf is hosting Fasching fun on Feb. 8 and 9. To learn more, go to Fasching Funpark

Fastnacht Jahrmarkt in Ansbach
A Fastnacht market is hosted downtown Ansbach with many vendors on Feb. 8 through 11; opening hours are 9 a.m. through 6 p.m. (closes at 4 p.m. on last day).

Kinderfasching in Nürnberg
A Kinderfasching, a carnival party with music and games for kids, takes place in Nürnberg at the Genossenschaftssaalbau Bauernfeind (Matthäus-Herrman-Platz 2, 90469 Nürnberg) on Feb. 9 at 2:30 p.m. Admission is 3 euros, to learn more, visit Kinderfasching Nuernberg