Five crazy days – Zirndorf
Zirndorf is hosting “five crazy days” at the end of the Fasching season Feb. 24 through 28 with a street market, food booths and lots of carnival activities. To learn more, visit Zirndorf Fasching

Fasching at the Brücken-Center
The Ansbach mall is hosting Fasching events Feb. 25 with performances of dance groups at 1 and 4 p.m., and a Kinderfasching party Feb. 28 at 3 p.m. The events are admission free. Find out more by visiting Fasching at the mall

Fasching Parade in Ornbau
A traditional Fasching parade takes place in Ornbau on Feb. 26, starting at 1 p.m. at “Am Kalkofen” and moving through town to the Stadthalle. More than 30 decorated wagons and music groups are participating in the event. To learn more, visit Ornbau Fasching

Nürnberg Fasching parade
The Nürnberg Fasching parade, the oldest of its kind in the world, leads 49 decorated wagons and more than 3000 participants through the city on Sunday, Feb. 26, beginning at 1 p.m. The route takes the parade from Am Stadtpark to Pirckheimerstrasse, Bayreuther Strasse, Rathenauplatz, Laufer Tor, Innere Laufer Gasse, Theresienplatz, Obstmarkt, Museumsbrücke, Königstrasse,  Kaiserstrasse, Josephsplatz  and finally Vordere Ledergasse. The best strategy to watch the parade is to pick a spot along the route and wait for the fun to come to you. For more details, go to www.fnf-nbg.de

Rosenmontag Fasching Party in Ansbach
The Kammerspiele Ansbach (Maximilianstr. 29) are hosting a Fasching party (dress up in a costume!) with DJ music Feb. 27, starting at 9 p.m. To learn more, visit Kammerspiele 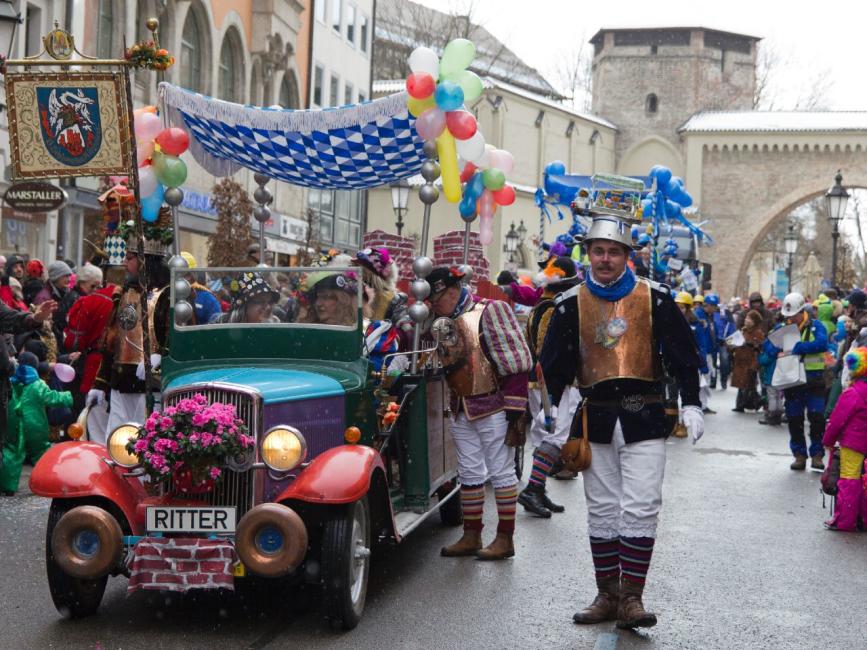 Rosenmontag Kinderfasching and parade in Ansbach
Ansbach’s youth participates in a parade on Rosenmontag, Feb. 27, through the old part of town. Children in costumes who would like to tag along assemble at 2:15 p.m. at the Martin-Luther-Platz. A percussion group leads the kids through town, ending up at the Onoldiasaal (Nuernberger Str. 32) where a party with music, clowns, magicians, face painting, games and much more takes place (ending at 6 p.m.).

Fasching at the Zoo
The Nürnberg Tiergarten celebrates Fasching Feb. 27 and 28 during normal opening hours. Every child (up to 14) dressed as a zoo animal enters for free. Children under 14 years must be accompanied by an adult. To learn more, go to Tiergarten

Fasching in Fun Park Zirndorf
The Playmobil Fun Park in Zirndorf is hosting Fasching fun with face painting and games Feb. 27 and 28. To learn more, go to Fun Park

Fastnacht Jahrmarkt in Ansbach
A Fastnacht market is hosted downtown Ansbach with many vendors on Feb. 27 through March 3; opening hours are 9 a.m. through 6 p.m. (closes at 4 p.m. on last day).

Honey Market in Bamberg
The annual Honigmarkt on Maxplatz in Bamberg takes place on Feb. 28 from 8:30 a.m. to noon. Vendors are offering a variety of honey products. To learn more, visit Bamberg Info

Fasching, Fastnacht & Karneval
The Fasching season, also known as the “fifth season” in Germany, has a long tradition in Europe; it originates in the preparation for the six-week fasting time during lent, which ends on Easter. Fasching, Fastnacht, or Karneval is a time when Germans loosen up a little, dress up in funny costumes and party. Karneval is especially popular in the Rhine region; cities like Cologne, Mainz or Düsseldorf more or less shut down to party during the high season. The date of the long Fasching weekend varies, depending on the church calendar; while the official start of the season is always on the 11th day of the 11th month at 11:11 a.m., the revelers stay mostly dormant during the Advent and Christmas season until the actual high Fasenacht season in the following spring. In the time between New Year’s and the high Fasching season many towns and villages host balls, parties and parades. Party goers typically dress up as a character, similar to Halloween. German police are cruising the streets more frequently at night to catch those who drink and drive.

For children, many communities host parties called “Kinderfasching,” usually taking place in a community center or gym. These events involve dress-up for the kids, a lot of loud music and dancing, games, face painting and food. They are quite popular with the kids, while the parents go along as chaperones (ear plugs recommended!).

The high season starts with Altweiberfasnacht, or crazy Thursday (Feb. 23), when traditionally in many towns the women take over the city’s courthouse and cut off the tie of any man who dares to wear one. After attending parties all weekend long, people flock to the large cities like Cologne or Mainz to watch the Rosenmontag (“Rose Monday”) parades (Feb. 27), or stay local and enjoy smaller parades, often with folklore background.

Faschingsdienstag (Feb. 28) – Shrove Tuesday – offers one last chance to party hard and then “bury” the carnival at midnight until following year. Aschermittwoch (Ash Wednesday) marks the beginning of Fastenzeit (“fasting time“- lent); the weeks before Easter are often used as a time for reflection and renunciation of certain personal vices (like smoking, alcohol or candy).