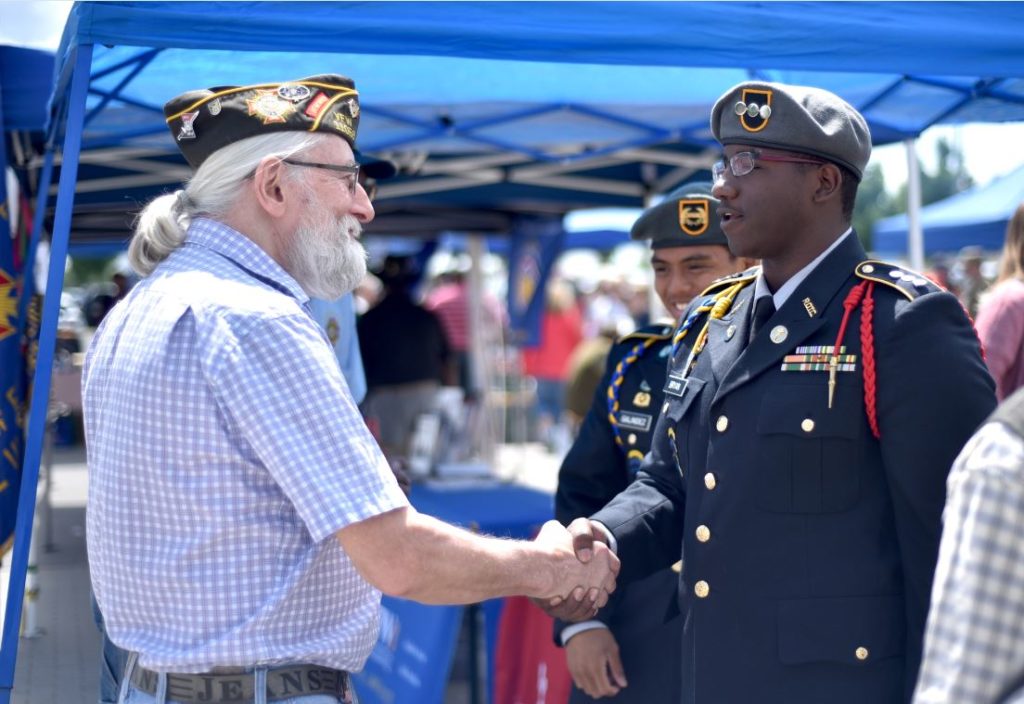 Mark Bryan, right, a Junior ROTC cadet who attends Ansbach Middle High School, thanks Billie Sherd for his service after presenting him with a commemorative lapel pin as part of U.S. Army Garrison Ansbach’s Vietnam War 50th anniversary commemoration at Urlas Kaserne in Ansbach, Germany, May 25, 2017. Bryan and his fellow cadets with the 9th Junior ROTC Battalion presented each Vietnam veteran at the event with a pin, a salute and words of gratitude.

ANSBACH, Germany (May 31, 2017) — Hundreds of U.S. Army Garrison Ansbach community members spent the afternoon of May 25 honoring veterans of the Vietnam War during the garrison’s 50th anniversary commemoration.

With this event, USAG Ansbach joined more than 10,000 other American organizations, installations and businesses that thanked U.S. veterans who were active-duty service members in any location between Nov. 1, 1955, and May 15, 1975.

The ceremonies are part of a greater effort to thank American’s Vietnam veterans through a congressionally authorized national commemoration established through the secretary of defense and with a presidential inauguration during a ceremony at the Vietnam Veterans Memorial in Washington D.C. May 28, 2012. The official commemoration is scheduled to continue through Nov. 11, 2025, to reflect the length of time that so many Americans served in and during the war.

Ansbach’s own commemoration incorporated a range of agencies including the American Legion, Veterans of Foreign Wars, Army and Air Force Exchange Service, the Commissary, Community Bank and Service Credit Union, the U.S. Army Europe Jazz Combo, the Ansbach Middle High School Band and the school’s 9th Junior ROTC Battalion, and the Directorate of Family and Morale, Welfare and Recreation.

The event began as Col. Benjamin Jones, USAG Ansbach commander, addressed the crowd and thanked the many contributors for their behind-the-scenes work to make the afternoon a success.

Jones singled out one of the chief organizers of the event, Kenneth Aungst, not only for his role in the commemoration, but as an example of the kind of service and sacrifice that characterize Vietnam veterans.

Aungst, a retired first sergeant, former commander of American Legion Post 1982 and a three-tour Vietnam veteran, also addressed attendees. Aungst said that although the Vietnam War was decades ago, memories of the war are immutable and fresh in the minds of those who served in country.

“I believe there’s a bunch of people sitting out there right now — if their grandchildren ask them, ‘Granddaddy, when were you in Vietnam last?’ they’ll probably say, ‘Last night,'” Aungst said. “It hangs in there for these people, but we’re here to honor them today.”

The formal centerpiece of the event was the recognition ceremony during which Ansbach community members had an opportunity to show their gratitude to local Vietnam veterans. Jones joined USAG Ansbach Command Sgt. Maj. Derek Cuvellier on the main stage to recognize two Vietnam veterans — D.W. Hope, representing the Army, and Richard Simms, representing the Navy — with special commemorative lapel pins and words of appreciation for their service.

All Vietnam veterans in the audience were then asked to rise and remain standing as Junior ROTC cadets circulated through the audience to present each veteran with a pin, a salute and words of gratitude.

The front of the pin features an eagle, a laurel wreath on a blue ring, and stars and stripes. Each graphical element has a distinct meaning. The eagle represents honor, courage and dedicated service, whereas the color blue represents vigilance, perseverance and justice. The reverse side of the lapel pin features the message “A Grateful Nation Thanks and Honors You.”

For the last formal event, Junior ROTC cadets Caison Duplessie, Angelina Lopez-Turrey and Dominik Moss presented a Quilt of Valor to retired Sgt. Maj. Eckart Steininger, who served in Vietnam from May 1967 to May 1968 as a tank commander with the 1st Infantry Division’s 1st Squadron, 4th Cavalry Regiment, and who is a recipient of three Purple Hearts, a Bronze Star and a Silver Star.

The Quilts of Valor Foundation is a not-for-profit organization that coordinates the donation of handmade quilts as gifts of gratitude and healing to service members and veterans who have endured war. The foundation accomplishes this mission through individual and group volunteer organizations. In this case, Junior ROTC Senior Army Instructor Madonna Roberts coordinated for the arrival of the Quilt of Valor through a group of volunteer quilters called the “Beach Lovin’ Quilters of the Carolinas,” who have been making and sending quilts to veterans in the Ansbach area for the last nine years.

The rest of the event was a time for fellowship as attendees enjoyed free food, beverages and cake courtesy of the event’s contributing organizations. One of those attendees was retired Chief Warrant Officer 5 Ronald Clary, who served as a helicopter pilot in Vietnam and who now serves as the theater airfield and air traffic officer at Storck Barracks. At one time during their active-duty careers, in fact, Aungst served as Clary’s first sergeant.

Clary had also attended the garrison’s Memorial Day ceremony earlier that day. He stressed that remembering one’s fallen comrades with solemn reverence is not the only way pay tribute to those who have paid the ultimate sacrifice.

“Certainly there were times when we were all in harm’s way, and for whatever reason some of us are here and some of us aren’t here,” said Clary. “Obviously we’re glad to be here and we’re sorry for the ones who can’t be here, but because they aren’t here and we are here, we should do things like this and live life, experience life and enjoy life.”

To see this story as it appears on Army.mil, visit www.army.mil/article/188669. 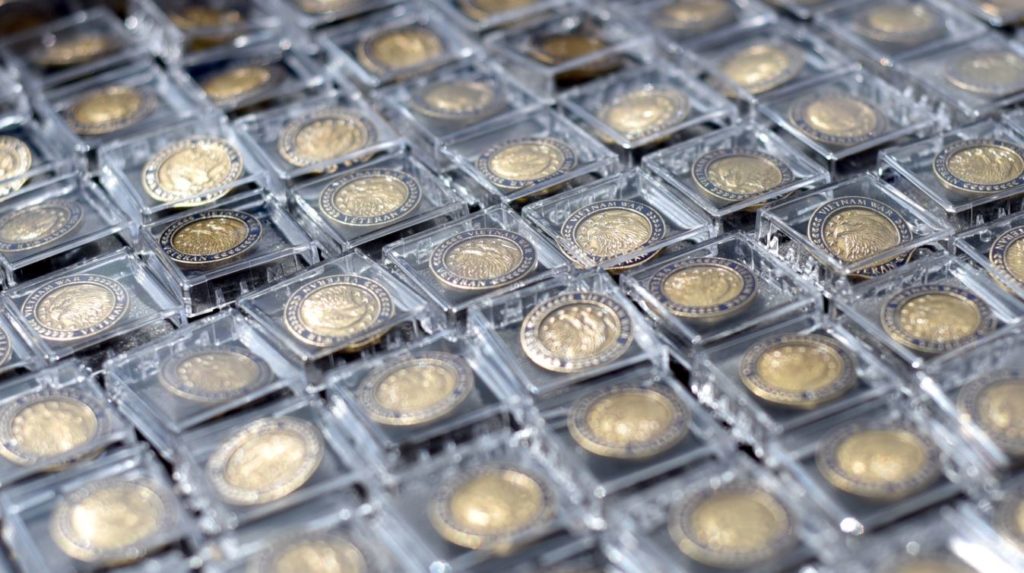 Pictured are the lapel pins presented to Vietnam veterans during U.S. Army Garrison Ansbach’s Vietnam War 50th anniversary commemoration at Urlas Kaserne, in Ansbach, Germany, May 25, 2017. The front of the pin features an eagle, a laurel wreath on a blue ring, and stars and stripes. Each graphical element has a distinct meaning. The eagle represents honor, courage and dedicated service, whereas the color blue represents vigilance, perseverance and justice. The reverse side of the lapel pin features the message “A Grateful Nation Thanks and Honors You.”