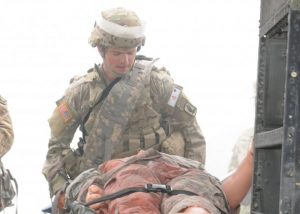 Spc. Daniel Guenther of the 7th ATC topped five other troops to earn superlative Soldier honors in a sensational showing for the home-station training command.

Conquering enlisted candidates earned not only continental bragging rights but an opportunity to represent USAREUR during the Department of the Army Best Warrior Competition, slated for Sept. 26 through Oct. 3 at Fort A.P. Hill in Virginia. The junior officer competition culminates at command level.

“I’m tremendously excited to represent USAREUR, my brigade and my battalion at this level,” said Ward, a platoon leader who serves with the Vicenza, Italy-based 503rd Parachute Infantry Regiment. “I need more than two hands to count the great officers who could’ve been selected and performed just as well. It’s an honor and a privilege to represent our brigade and our Soldiers across Italy in this event.” 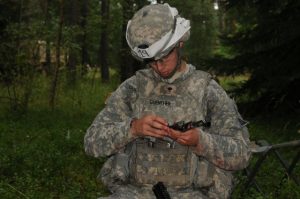 “I was surprised when they announced my name,” said Guenther, a fire team leader with 1st Battalion, 4th Infantry Regiment and native of Belgrade, Montana. “You really didn’t know who would win until the very end. The unit has been training me nonstop the last two months to get ready. They’ve done a great job helping Staff Sgt. Rodgers and I prepare so I feel pretty good about our prospects at the DA competition.”

“It’s been a thrilling experience to test my mettle against other great NCOs across Army Europe,” added Rodgers, a weapons squad leader with the 1-4th Infantry. “We’re going to study hard, train hard and come out to win.”

The competitors endured a week of activity that strained stamina, will, nerves, muscles, and limbs to their breaking point. The competitors received little rest during waking hours from a relentless sequence of competitive tasks beginning shortly after their arrival at Camp Aachen. “Day 0” included not only the ordinary inspections, checks and administrative activities, but written tests, essays and simulated armed engagements.

After the Army Physical Fitness Test – conducted in field uniform – first thing the next morning, competitors participated in a challenging obstacle course, reacted to a chemical threat, employed grenades and fought through a daunting “urban combat” scenario taxing ingenuity, wits and battlefield savvy as well as tactical skill. Candidates conducted uniform inspections and even engaged with hard-hitting “battlefield reporters.”

The third competitive day – or “Day 2” – featured a variety of marksmanship and weapons tasks testing candidates’ proficiency with systems ranging from small arms to machine guns. A challenging medical scenario required first aid expertise, teamwork and nerves of steel. The day’s activities concluded with a “high-ropes obstacle course” that effectively disqualified not only weaklings but anyone afraid of heights.

The ensuing “day” started at the stroke of midnight. Candidates searched for elusive points in darkness and dawn before facing off against simulated targets at the “Gunfighter Gym.” The marathon ended with a late-afternoon appearance before a “knowledge board” comprised of senior leaders armed with challenging informational and scenario-based queries.

The final day began with a grueling 12-mile foot march. Candidates literally grappled with each other during the competition’s culminating event, a “combatives” tournament that tested willpower as well as strength, skill and stamina. A festive “surf and turf” pre-ceremonial meal at the main installation dining facility contrasted favorably with the fare candidates choked down between events during the competition.

Organizers described the competition as deliberately comprehensive – even intentionally overwhelming.

“The competition tests every possible Soldier quality,” said Master Sgt. Patrick Superales of 21st TSC headquarters, the lead event organizer. “The candidates have to be physically fit; they have to be proficient in the full range of Soldier skills; they have to know policy, regulations and doctrine; they have to know and live the Army Values. It takes much more than strength and endurance, although that’s a prerequisite. When we say ‘Best Warrior’ it encompasses everything – it means being the very best of Soldiers and leaders in every way, across the board.”

Command Sgt. Maj. Sheryl Lyon, the USAREUR – and competition – senior enlisted leader as well as guest speaker during the awards ceremony, described the event as a triumph not only for candidates but for the organizations that developed them.

“We consider USAREUR to be the Army’s ultimate ‘leadership laboratory,'” added the Thompkonsville. “These candidates are perfect representatives of that. This shows the caliber of the Soldiers and the leaders we’re producing across this command.”

Lyon, who personally oversaw final rehearsals and preparations for the competition as well as the event itself, praised the efforts of a dynamic team of some 220 organizers, technicians, administrators, logisticians, transporters, cooks and leaders that managed practicalities, movements, automation, supply, and the competitive “lanes” themselves.

“It takes a small army to put an event of this size together,” she said. “We have not only participation but support from organizations throughout Europe. This isn’t just about the competitors themselves. Whether you’re a competitor, a lane NCOIC or OIC, or event cadre, you’re part of this ‘leadership laboratory’ – you’re learning tactics, techniques and procedures in a phenomenal learning environment across the board. 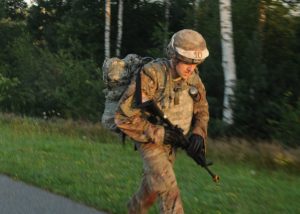 “I’ve been deeply impressed by the pride, professionalism and technical excellence I’ve seen throughout this competition,” she added. “I’m very proud of everyone who was part of this event – the competitors, their organizations, the cadre, the organizers – everyone across this command who made it happen.”

Rodgers and Guenther will need all the pride, determination, stamina and skill they can muster when they face off against 10 champions from other commands and direct reporting units across the Army at the end of September. DA organizers choose from 27 potential evaluated events without prior notice, forcing candidates to prepare diligently for all of them.

“Our competition was deliberately very tough,” she said. “We attempted to replicate – and in many cases actually surpass – what these competitors will face at DA to ensure they’re ready to succeed at that level. We chose to conduct as many events as possible, not only to challenge them but to prepare them for whatever comes their way at DA. I think they’ll be very competitive after everything we’ve put them through.”

To see this story as it appears on the Army News Service, visit www.army.mil/article/173184.