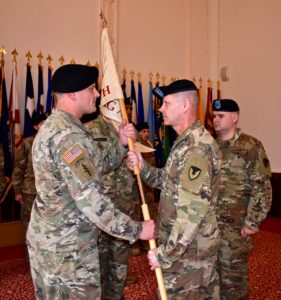 Ansbach, Germany (April 18, 2019) — During a Change of Command ceremony at the Von Steuben Community Center, the Headquarters, and Headquarters Company (HHC) of the United States Army Garrison Ansbach changed leadership today. Cpt. Oakley A. Timms turned over the duties as the commander to Cpt. Jason L. Worthington.

The highlight of the change of command ceremony was the traditional “passing of the unit guidon,” symbolizing the transfer of command from the outgoing commander to the incoming commander.
“Our profession of arms has some long standing, deeply cherished traditions and you have just witnessed one of them. As the guidon was passed from Cpt. Timms to Cpt. Worthington a few moments ago, so too was the loyalty of the soldiers from one commander to another,” explained the host of the ceremony, Col. Steven M. Pierce, commander of USAG Ansbach.

He went on to praise HHC for their special bond with the host nation partners.

“Our HHC provides much of the public face of our garrison. The soldiers of the detachment often participate in off-post events and ceremonies, on weekends and on holidays, and they have always demonstrated and represented the professionalism of our army to our host nation. Under Cpt. Timms’ leadership, HHC built and strengthened the partnership between our military community and our host nation.”

The non-commissioned officer of the quarter, Sgt. Trayvon Johnson presented red roses to Mrs. Timms, symbolizing the beauty and fulfillment of her time spent caring for the Soldiers and their families. Mrs. Worthington received a bouquet of yellow rosebuds from Pfc. Rebecca Grubb, symbolizing a new beginning.

Cpt. Worthington received his commission in the Army as an Infantry Officer in 2014, after completing the Green-to-Gold program and graduating with a Bachelor of Arts degree in Intelligence Studies from Fayetteville State University. His last duty station before his assignment to USAG Ansbach was Fort Huachuca, AZ.

The outgoing commander, Cpt. Timms, and his family will move on to their next duty station in Ft. Bliss, TX, soon.

About USAG Ansbach
The history of the United States Army Garrison Ansbach is one of transition and adaptation. What is now known as USAG Ansbach was originally designated as the 87th Support Battalion Oct. 16, 1991.

It was re-designated as the 235th Base Support Battalion (BSB) Nov. 27, 1991 and assigned to 7th Corps. Upon activation, the battalion was placed under the 99th Area Support Group (ASG) Nürnberg with the primary mission of managing base operations. The battalion originally consisted of a headquarters and headquarters detachment located in Ansbach and three area support teams in Schwäbisch Hall, Crailsheim, and Illesheim.

With the drawdown of U.S. Forces in the fall of 1991, the battalion went through several significant changes, and in 1993 the 99th ASG inactivated and the 235th BSB became part of the 98th ASG in Würzburg. The drawdown also initiated the closure of Dolan Barracks in Schwäbisch Hall Sept. 30, 1993, and McKee Barracks in Crailsheim Jan. 15, 1994. In 1993, the 98th ASGg in Würzburg inactivated and became the U.S. Army Garrison Franconia, assigning the 235th BSB to USAG Franconia whose headquarters were located in Würzburg.

In 2006, the agencies of Installation Management Agency (IMA), Community and Family Support Center, and the Army Environmental Center were consolidated to create the Installation Management Command (IMCOM). On Oct. 13, 2006, USAG Franconia was deactivated in a ceremony at Leighton Barracks, Würzburg, and USAG Ansbach, USAG Bamberg and USAG Schweinfurt were all realigned as separate reporting garrisons under the command and control of IMCOM-Europe.

On Oct. 1, 2009 the military communities of USAG Bamberg and USAG Schweinfurt were designated as indirect reporting activities and aligned under the USAG Ansbach – the Franconia Military Community (FMC) was born. The name ” Franconia Military Community ” pays homage to the regions within the German state of Bavaria that each community was based in. USAG Bamberg was located in the region of Upper Franconia, USAG Schweinfurt was located in the region of Lower Franconia, and the headquarters USAG Ansbach, is still located in Middle Franconia.

Since the closure of the Bamberg and Schweinfurt garrison, USAG Ansbach has become a parent unit for a very different make up of units. The Franconia family now includes international partnerships in Poland, Romania, and Bulgaria.