Hobart has the responsibility for almost 8,000 Soldiers, civilians and family members in Ansbach and Illesheim.

“To the Soldiers, civilians and our local national teammates of the Ansbach garrison, I am excited to lead our team of professionals who embrace our service culture and I look forward to our time together, Hobart said. “There is nowhere I would rather be right now than here in Ansbach.” 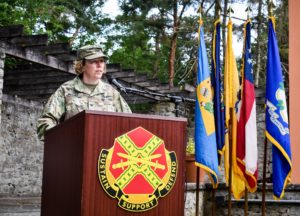 Hobart received her commission into the Army in 1997 after graduating from the University of California-Irvine. Hobart was stationed in Illesheim and Würzburg in the early 2000s. She has held numerous assignments in the military intelligence career field as well as a deployment to Iraq prior to taking command.

The traditional change of command ceremony with many German and American guests, as well as the entire garrison workforce, was not possible this year due to COVID-  19. Instead, the ceremony was held with only a small group in attendance and broadcast live via Facebook. 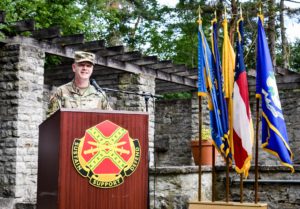 Pierce said his time in Ansbach was his “most rewarding since joining the military.”

“The friendships and relationships with our German partners that my family and I were able to build during our time here are experiences that will accompany us for a lifetime,” he said. “My family and I will always have fond memories of our home in Franconia.”

Pierce moves on to Wiesbaden as Deputy Director, IMCOM-Europe, the higher headquarters for the seven U.S. Army garrisons in Europe. 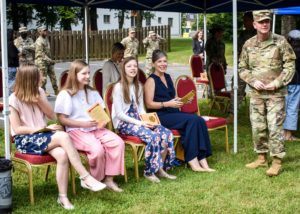