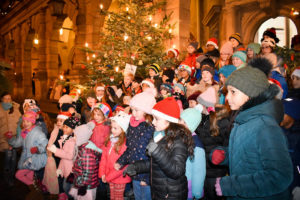 “It is great to be here,” he said. “Surrounded by delicious aromas, a beautiful setting and wonderful people make this season, without a doubt, unforgettable for us.”

Last evening, the Ansbach Elementary School children’s choir contributed songs and carols during the event surrounded by applause of those in attendance.

“I’d like to thank Whitney Mansell, the Arts and Music teacher for the Katterbach Elementary School,” Pierce said. “Thank you for your guidance, inspiration and patience, which I am sure, was needed at times; Thomas Schlötterlein for the translations; and Ms. Ida Dehaan-Weissmann deserves our special appreciation. She has volunteered and supported this holiday project since 2012.”

The popular annual market takes its name from the Rothenburg “Reiterle” — a figure plucked from medieval legend whose arrival is the highlight of the market and considered to be a messenger from another world flying through the night, taking with him the souls of the dead each winter.

The Christmas market in Rothenburg has been regularly held and celebrated since the 15th century.

The city offers special guided tours around the market and through the narrow city streets of the old town each day until Dec. 24, and the Franconian version of Santa Claus, ‘Pelzmärtel’, makes regular visits to the marketplace to greet visitors and spread holiday cheer.