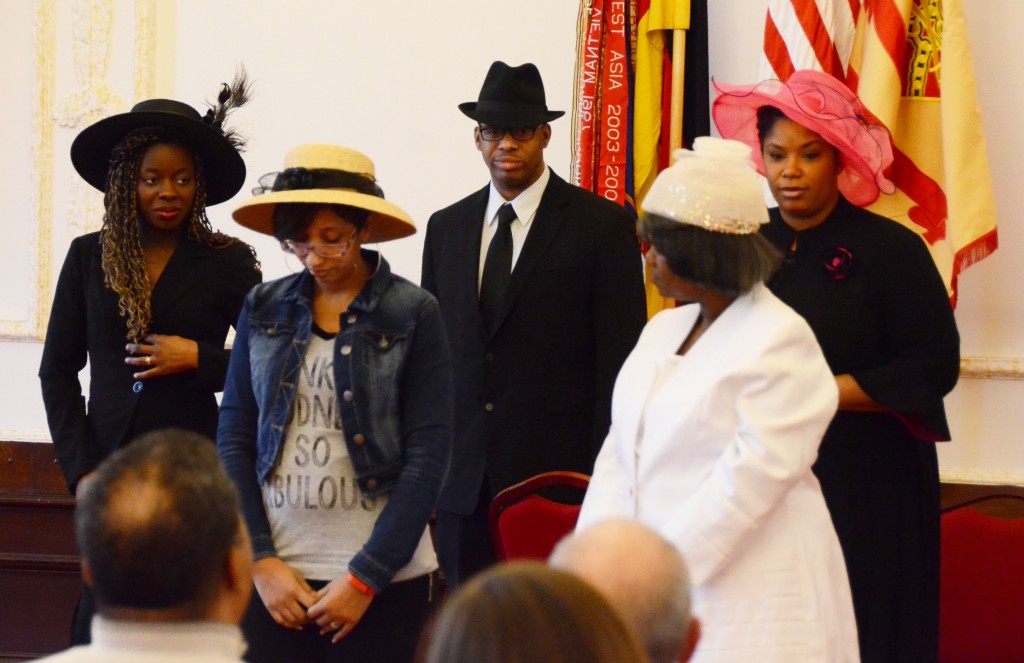 Five of the seven performers who are preparing for the U.S. Army Garrison Ansbach Family and Morale, Welfare and Recreation’s production of “Crowns” act out a 10-minute excerpt of the play Feb. 23, 2016, during the garrison’s observance of Black History Month observance.

Crowns, written for the stage by Regina Taylor, was adapted from a book of the same name by photographer Michael Cunningham and journalist Craig Mayberry. The book and its photos focused on the tradition of African-American women choosing flamboyant hats to attend church – and exploring the stories surrounding it.

In a 2002 interview with NPR about the book and its adaptation, Mayberry gave his perspective on the custom.

The play follows a group of six women – along with one man who serves as a sort of narrative surrogate for the men in the women’s stories – into different services at church, which include a wedding, funeral, daily service and baptism.

Victoria Hanrahan, USAG Ansbach entertainment director, said the play is an exploration of these women’s lives dating from the 1940s to the 1990s.

During the play excerpt at the Von Steuben, one character, Mother Shaw, remarks that the tradition dates back to the times of slavery when church was the only place that slaves were allowed to congregate. This was carried on into the era of segregation, Shaw says.

“After slavery, there were whites-only signs everywhere,” said Shaw. “So, if you had something, and you wanted to be stylish and show off, you wore it to church.”

The other women in the group explain their own reasons for wearing a variety of carefully chosen and adorned hats. Each explanation serves as a springboard for the characters to tell stories that reveal different facets of life for black women in the south.

The one rebel among the women is the young, standoffish Yolanda, who is visiting from Brooklyn. By the end of the excerpt, it’s unclear how or if Yolanda will ever accept her family’s traditions.

The USAG Ansbach production of Crowns is scheduled for May 4, 5 and 6 at the Terrace Playhouse.

To read the related story about remarks from the keynote speaker of this event, visit https://ansbachhometownherald.com/little-rock-nine-retrospective/.