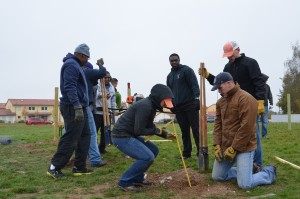 Members of the community dig a post hole for a dog park at Urlas Community.

Members of 12th Combat Aviation Brigade, the local chapter of the American Legion, Better Opportunities for Single Soldiers, and the Directorate of Family and Morale, Welfare and Recreation cleaned up park areas at Katterbach Kaserne and Storck Barracks, cleaned up flower beds at Urlas Community, cleaned a gymnasium at Barton Barracks, dismantled a playground at Katterbach Kaserne, and set up a dog run at Urlas Community.

Army Community Service, a division of the Directorate of Family and Morale, Welfare and Recreation, coordinated the volunteer event. John Hartman, Army Emergency Relief program manager with ACS, was the project manager for the day.

“It was an opportunity for our community to come together as a team,” said Hartman. “Make a Difference Day event celebrates volunteerism on a national level and provides a great opportunity to network and take pride in your community.”

Hartman expressed how impressed he was by the turn-out.

“In spite of cold, foggy weather we had 129 registered volunteers actively supporting six separate projects to improve the overall quality of life within our community,” he said.

Priscilla Nastasia, chief of ACS, raked up leaves in the park area in front of the ACS building at Katterbach Kaserne.

“We just want to clean up the ACS [building area],” said Nastasia. “People use it every day. It’s a highly trafficked area.”

She added that the area provides incoming Families a first impression of the post since a lot of in-processing is done at the ACS building and the welcome center across the street.

“Every new person that comes to the post goes back and forth between these buildings,” she said. 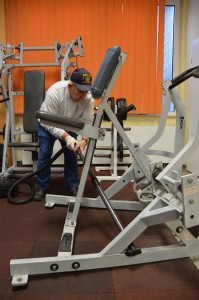 Members of the local American Legion Post 1982 and others cleaned the gymnasium near the Barton Barracks fuel pumps. Kenneth Aungst, commander of the American Legion post, recommended community members continuously care for those facilities they use.

“If you’re part of this community and you use something like this gym, before you go home, clean it up,” said Aungst.

Aungst and the American Legion were also behind the cleanup of Memorial Park at Storck Barracks earlier in the week.

“I don’t want these facilities to get neglected,” said Tomas Rivera, a Soldier with E Company, 1st Battalion, 3rd Aviation Regiment, who volunteered at the gym. “I think I can make a difference. Providing two or three hours – that’s the least I can do.”

Joshua Zinkan, who also cleaned the gym, made a similar plea that making a difference was more than volunteering.

“Just do a little bit here and there to help out the community,” said Zinkan. “Anything will help make a difference — if you just help clean up or pick up something if you’re walking by.”

Benson explained that it could be like the projects happening Saturday such as a clean-up of a common area or simply helping out a neighbor that may need assistance.

Benson also attended other projects during the event, including the cleaning of the flower beds and the setting up of the dog park at Urlas. 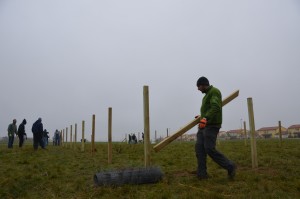 For the dog park, community members, under the guidance of Capt. Kate Alfin and Command Sgt. Maj. Todd Hedrick, both of 12th CAB, drilled and dug post holes, installed posts and put up fencing. The one fenced area is meant to be the first part of a three-area dog park, according to Dan Riley, director of Family and Morale, Welfare and Recreation. One area would be for smaller dogs, one for larger breeds, and a third area would serve as a recovery area for the grounds.

“There’s no real area for people to socialize their pets together,” said Alfin, who has three dogs. “Dogs are very uncomfortable being on leashes and socializing with each other, so the dog park is an opportunity and a place for people to bring their pets.”

Alfin said that the park would not only provide dogs the chance to socialize but would provide their human counterparts to socialize as well.

“It will be beneficial overall for the well-being of the community,” she said.

“They make our dogs better dogs and our people better people,” said Riley of dog parks. “Dogs get to develop better dog behaviors. People come out and they meet their neighbors and talk about their common interests.”

The three-area dog park is part of a larger plan to develop the residential area of Urlas Community. This development, according to Riley, may also contain a community garden.

Hedrick also said putting up the dog park was good for the Soldiers and volunteers performing it.

“They learn some skills they’ve never done,” said Hedrick. “A lot of these kids have never done this, and it teaches them old skills — old farm tasks like dig a hole, put up a fence — things that could be potentially useful for them one day.”

At the flower beds in front of the Post Exchange, Soldiers and Family members pulled up weeds and cleaned up the beds. First Lt. Jordan Reilly, 412th Aviation Support Battalion, 12th CAB, and many others had originally worked at dismantling a playground near the back gate of Katterbach Kaserne. After they finished their work there, they moved to Urlas to work on the flower beds.

“If you pick projects that directly affect the Soldiers that are volunteering, I think you have a better opportunity,” said Reilly of the playground they dismantled earlier in the morning. “A lot of our Soldiers live over in the housing and have small kids.”

Though largely individual Soldiers and Family members comprised the volunteer workforce Saturday, some of the volunteers made the event a Family affair. Althea Williams brought her daughter Kimora Evans and son Anthony Evans to the cleaning of the community park at Army Community Service. Concerning how to entice their fellow students on joining the voluntary initiative, Anthony mentioned that volunteer hours would have a positive impact on college applications. Kimora said the work itself — raking leaves in this instance — was fun.

“I wanted to instill in them the importance of getting involved in their community,” said Williams of her children’s participation. “You see this large area, and you see several people out here and how quickly you can beautify the area. We’re definitely making a difference.”

“You don’t have to wait until Make a Difference Day,” said Nastasia. “You can go out in your own community and rake leaves or clean the sidewalk or pick up a piece of trash off the ground.”

Make a Difference Day lasts for one day, but volunteer opportunities abound at USAG Ansbach. Community members interested in donating their time can contact Army Community Service at 09802-83-2883 or DSN 467-2883.

To read this story as it appears on the Army News Service, visit www.army.mil/article/157699.