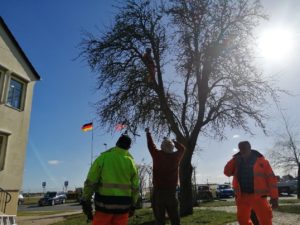 A meadow orchard (Ger.: “Streuobstwiese”) is a traditional form of fruit growing with tall fruit trees mostly of different ages and different species and varieties. Generally, meadow orchards are maintained for food production, however, differ significantly from modern forms of fruit growing, so called “plantations”, as those comprise mainly of low-stemmed fruit tree varieties in monoculture.

In addition to individual fruit or nut trees found throughout the installation, : one south of Katterbach, near the village of Neukirchen, and one on the fire fighter training center at Urlas. As described in the previous section, it is therefore important to care for and maintain these trees entirely in the spirit of environmental protection and conservation. For this purpose, Directorate of Public Works Environmental Management Division offers a fruit tree pruning course for Roads and Grounds Division employees at least every two years. In February 2022, approximately 15 employees participated. As a result, they are well trained to protect these valuable habitats and thus contribute effectively and sustainably to the promotion of biodiversity at USAG Ansbach.

The history of meadow orchards

The history of cultivation of meadow orchards began very early. Especially the Romans brought many of the species we know today, such as apple, pear, plum, cherry or walnut to Central Europe. These tree species were already cultivated in ancient Greece.

The 17th and especially the 18th century are considered to be the actual period of origin of orchard cultivation. At that time, fruit cultivation outside the own garden and villages was politically promoted and partly even enforced. Fruit growing played an important role in supplying the population. The landscape was characterized by villages surrounded by a ring of fruit trees. With the expansion of the road network, avenues were created, which were also planted with fruit trees and connected the settlements.

At the beginning of the 20th century, the use of meadows and pastures in orchards received a significant boost when the dairy industry came into being and grassland farming became more profitable as a result. Orchard cultivation then had its peak around the 1920s and 1930s. With the progress of scientific development, more than 6000 varieties of fruit were created, including at least 2700 varieties of apples, 800 varieties of pears, 400 varieties of cherries and 400 varieties of plums.

Between 1965 and 2010, there was a decline in meadow orchards of between 70-75%. The reasons for this are manifold but mainly to be found in the area of agricultural policy and construction 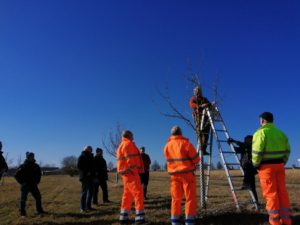 and settlement. As early as the 1920s, Europe began the trend shift to fruit plantations, with only three varieties of apples and pears being planted. In 1953, a decision was made by the Federal Ministry of Food, according to which no more high trunks were to be cultivated. The establishment of fruit plantations was even promoted by the European Community until 1974 with premiums for the clearing of each high trunk fruit tree. This was purely due to economic interests. High trunks usually come into full yield only after 10 years, low trunks already in the third or fourth year.

Due to the historical establishment of meadow orchards, mainly in and around settlement areas, they were now also in the way of the creation of new residential and commercial areas. The same was true for road construction, which is why many fruit trees were removed.

The decline and disappearance of meadow orchards from the cultivated landscape has negative impacts on ecological diversity and biodiversity. Meadow orchards are among the most species-rich biotopes in Central Europe. It offers the best conditions for a high species diversity. The lack of nutrients, due to the lack of fertilization, and the fact that it is only mowed twice a year means that no plant species can gain the upper hand. This means that numerous species can coexist. More than 5,000 animal and plant species live in a meadow orchard. The meadows in the undergrowth are particularly rich in species and flowers and provide insects such as bees, bumblebees and butterflies with an abundant source of food. At the root area of trees, field mice, hedgehogs and shrews find their home. Together with hares, deer and birds, they feed on the fallen fruit. Mosses and lichens grow on tree trunks and beetles live in the cracked bark. The rotten parts of the wood are particularly valuable from an ecological point of view as many rare insect live in the deadwood. Songbirds and woodpeckers nest in hollow trunks or large knotholes. Abandoned caves and crevices serve as quarters for bats. Especially the old trees of a meadow orchard are ecologically valuable. The older a fruit tree gets, the more important it is for nature.