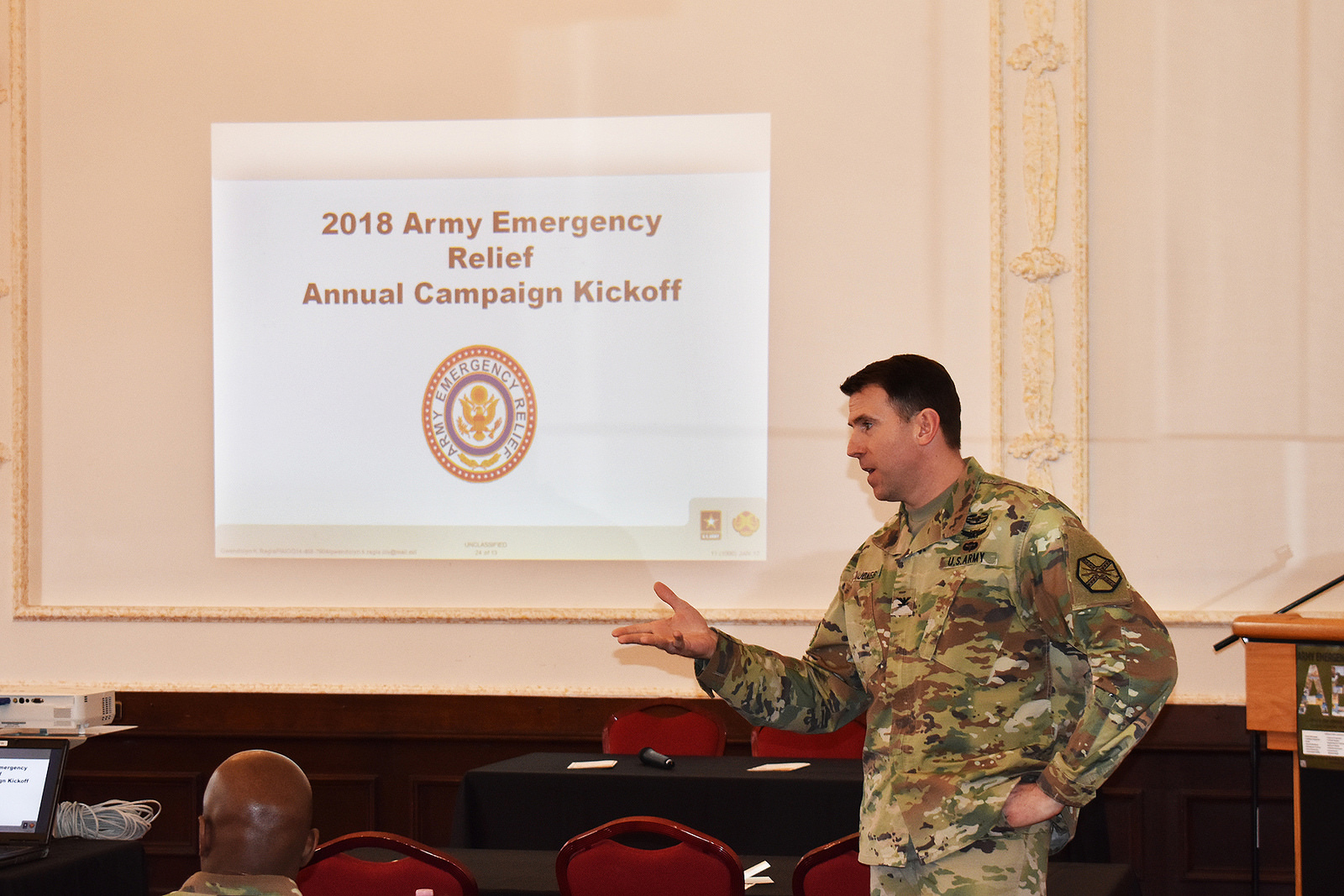 Retired Colonel Eldon Mullis, Deputy Director and Chief Operating Officer for AER was the guest speaker. Mullis was visiting Army garrisons throughout Bavaria from AER Headquarters to bring AER awareness to the overseas military community and raise funds to provide emergency assistance to Soldiers and their families in financial need.

Mullis said the goal of the 2018 campaign is “100 percent Soldier contact,” to ensure every Soldier is aware of the AER program and has an opportunity to help a fellow Soldier by making a contribution.

Mullis said that often Soldiers do not avail themselves of AER resources out of a misguided reluctance to appear financially needy or unable to budget competently. He pointed out that to avoid an imagined stigma many Soldiers went to cash-advance and so called “Pay-day loan” offices that often create long-term financial problems for Soldiers by offering easy loans with compound interest rates at 200 to 300 percent.

“AER is there for you. Soldiers helping Soldiers.” Mullis said. “There’s no cap on how much a Soldier can request from AER, providing the emergency is genuine and a Soldier is deemed eligible. AER financial assistance may be provided in the form of a no-interest loan, an outright grant, or a combination of both. We are easy to work with, discreet and work quickly. Mullis said. “Soldiers in need shouldn’t wait for or shun AER assistance.”

Col. Jones echoed Mullis encouragement to Soldiers and pointed out in his remarks to the assembled that in 2017 local active duty Soldiers and retirees alone donated more than $14,000 in support of AER. Last year AER was able to assist 71 local Ansbach individuals by making grants and interest free loans over $91,000.

“Every Soldier has experienced some kind of financial emergency or hardship during his career – including myself” said Jones. “AER is there to assist. It’s what helps a Soldier fund an airplane ticket when he just learned of the unexpected death in his immediate family or it can help that Soldier cover funeral expenses after finding out the loved one he lost had no life insurance. Some of us know how frustrating it can be if your paycheck is delayed–or even worse, if your money was stolen; AER helps out here, too.”

“The AER campaign is ongoing through May 15, but emergencies, as we all know, happen all year long. Let’s support ourselves the way we support others and help keep our Army strong. Please consider giving this year.”

Soldiers or Family members may apply for assistance at any Army installation, worldwide. 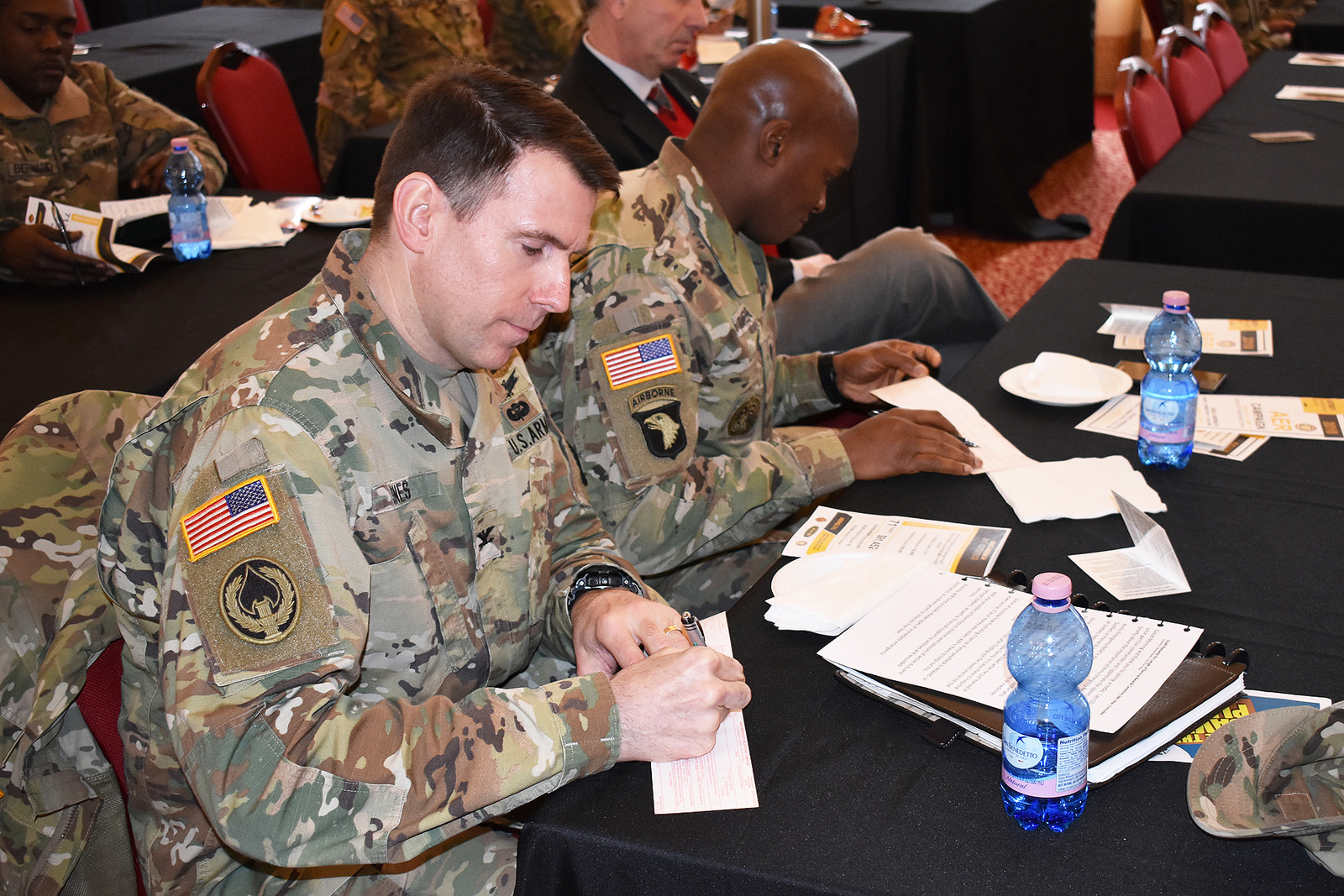 The U.S. Army Garrison Ansbach (USAG Ansbach) Military Community is located in the Franconian region of Bavaria and is spread across six sites and nine kasernes dispersed around the city of Ansbach and the village of Illesheim: Barton Barracks, Bismarck Kaserne, Bleidorn Kaserne, Franken Kaserne, Katterbach Kaserne, Oberdachstetten Training Area, Shipton Kaserne, Storck Barracks, and Urlas Kaserne. Today, Ansbach is the home of the 12th Combat Aviation Brigade (12th CAB), the community’s largest tenant unit. USAG Ansbach continues its mission of streamlining base support operations management, allowing tactical commanders to concentrate on their essential training and missions. The garrison takes pride in its support to more than 6,000 Soldiers, civilians, and family members, working and living within the USAG Ansbach area. To learn more about the people and facilities of the U.S. Army Garrison Ansbach (USAG Ansbach) and the people they support in Ansbach, Katterbach and Illesheim, visit the community website at http://ansbach.army.mil