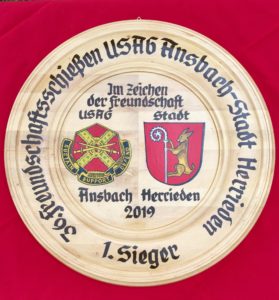 ANSBACH, Germany – The German-American Partnership Shoot, an annual tradition between U.S. Army Garrison Ansbach and the town of Herrieden, is a friendly marksmanship competition that brings hundreds of Soldiers, Civilians and Germans to the Oberdachstetten Training Area every year.

The competition, which took place July 12 this year, strengthens community relations between USAG Ansbach and its local host nation partners, specifically with the garrison’s partner city of Herrieden.

This year marked the event’s 36th iteration, with the competition moving from Herrieden to the Oberdachstetten Training Area 24 years ago.

“Things have changed considerably since then, but what hasn’t changed is that this event is about competition, good company, and strong partnerships,” said Col. Steven Pierce, commander of U.S. Army Garrison Ansbach. “It is a great opportunity for us to celebrate our longstanding cooperation and friendship.”

The winning team will receive the winners’ trophy, a hand-painted wooden target, during the city of Herrieden’s annual Altstadtfest July 20.

Top teams at the German-American Partnership Shoot and their scores:

The top three shooters were:

(* In the event of a tie, the collective number of bullseyes determined the placement.)