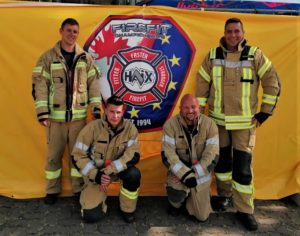 ANSBACH, Germany – Four U.S. Army Garrison Ansbach firefighters from the Katterbach and Illesheim fire stations participated in the qualifying run for the Firefit Europe Challenge in Hannover, Germany, for the first time June 14.

The sports event included different disciplines, which simulate the work firefighters have to do on the fire ground.  The USAG Ansbach team started as two tandem teams with two firefighters each. 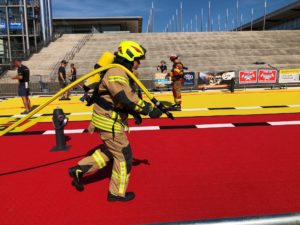 The first team member had to don a self-contained breathing apparatus (SCBA) and climb a three-story staircase. After reaching the top, he had to pull up a 20-kilogram hose package on a rope and quickly return downstairs, jump onto the Keiser Force machine, a simulated forcible entry-chopping device developed specifically for the fire service, and hammer a 75-kilogram object a certain distance.

Once the target was down, he dropped the closed attack line, which is a line of hose, pre-connected to the pump of a fire apparatus and ready for immediate use in attacking a fire. 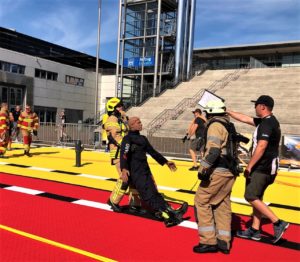 The firefighter ran to the next station to “Rescue Randy,” an 80-kilogram mannequin to pull 50 meter backwards out of the scene, toward the finish line.

Both teams returned to their stations the same day, and are now waiting for the results to be announced; if they qualify for the championship finals, they will return to Hannover June 18 and 19.

Stefan Groetschel, chief of Fire & Emergency Services Ansbach and the IMCOM – E Fire Fighting Training Center at USAG Ansbach, hopes that his fire fighters will have another chance to compete: “Our guys were proud to represent the USAG Ansbach Community, and be part of the best hometown in Europe!”