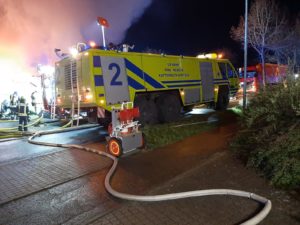 ANSBACH, Germany (May 5, 2021) – Host nation authorities called upon the U. S. Army Garrison (USAG) Ansbach fire department when a major fire broke out in a recycling plant in the city of Rothenburg o. d. Tauber during the night of April 28.

The USAG Ansbach fire department is listed in the Integrierte Leitstelle Ansbach (Integrated Dispatch and Operations Center Ansbach), as Stefan Groetschel, USAG Ansbach Fire Chief explains: “Our resources are listed in the Integrated Dispatch and Operations Center Ansbach, this means all our manpower and equipment is registered in their computer.  So if host nation agencies require special equipment and additional resources they do alert us.”

In this case, notification of the structural fire was received at 11.59 p.m. Wednesday, April 28, followed by a request for mutual aid 47 minutes later. One each of the USAG Ansbach’s Panther Aircraft Rescue and Fire- fighting vehicle (ARFF), each capable of carrying 12,000 liters of water and 1,500 liters of extinguishing foam, were dispatched to the fire site in Rothenburg o.d.T. from Katterbach Army Airfield and Illesheim Army Airfield. 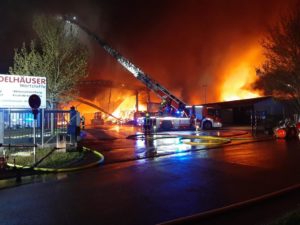 Additionally the Tilt Hook truck went out to help. “We transported and pumped a total of 700,000 liters of water which we provided by “shuttle service” using especially the Tilt Hook truck and the roll-of container since the fire hydrants on location were extremely overstrained.  The Panthers were used to pump water for the aerial ladders and other engines/ turrets due to the big pump capacity.” said Groetschel.

Juergen Holstein, Rothenburg’s Stadtbranddirektor (City Fire Chief) was elated about the support of U.S. Army’s fire department and its capabilities: “Naturally it is an immense advantage if you have access to such powerful, high-tech equipment in the event of such a major fire. When the information came in that night, that the Katterbach and Illesheim U.S. fire brigades were on their way with their ARFFs, I took a deep breath. The boys were of invaluable help with the water shuttle at a time when we needed as much water as we could possibly get.”

The collaboration between the U.S. Army fire departments and the host nation fire departments has a long tradition. Holstein explains: “Through the Fire Training Center at Urlas, many German and American colleagues already know each other. Our fire fighters are able to conduct their mandatory breathing apparatus training there.”

For that, and for the latest support at the Rothenburg fire, Holstein emphasizes: “We would like to thank the Katterbach and Illesheim airfield fire fighters very much for their collegial help.”

Local press reported, the fire could be seen from kilometers away during the night. About 300 fire fighters were on scene. Damages are estimated at several million euros. The smoke was so thick, it still impaired traffic on Autobahn A7 the following morning.

The Bavarian Fire Department Law provides for mutual assistance of fire departments within a certain proximity.