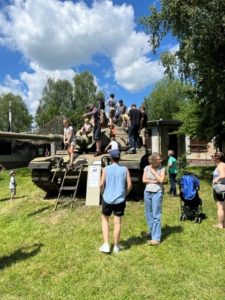 The traditional open house event presented the extensive exhibition of military artifacts, military memorabilia and a large military vehicle park from throughout the last century.

It attracted thousands of guests on a sunny Sunday afternoon. The association, in appreciation of the U.S. Army, invited all military community members and their families to this event.

Fritz Wittmann, the curator of the museum explained, “We want to show military history that happened right here in this very location to the younger generation, and also show our appreciation to the U.S. Army and its Soldiers who are stationed here.”

The former Lufthauptmunitionsanstalt Oberdachstetten was the largest Luftwaffe (Air Force) ammunition factory in southern Germany during the Nazi dictatorship period in Germany, and at one point housed over 3,000 people to include civilian workers, soldiers, conscripts and foreign workers, forced to work there producing ammunition. The exhibit has dedicated an area to the memory of these workers.

After end of World War II, the Frankenkaserne grounds were used by the U.S. Army, before the Bundeswehr moved in. Since the Bundeswehr vacated the post, it has been used by USAG Ansbach.

The Muna museum exhibit focuses mainly on the U.S. Army’s and Bundeswehr history in the region. For example, large exhibits of the former Cantigny museum on Leighton Barracks in Würzburg were transferred here.

The museum shows a hall with walk-in displays that trace the path of the U.S. Army from World War I to the first conflict in Iraq. The exhibit expands over more than 3,600 square meters (almost 40,000 square feet).

There is a variety of wheeled and tracked vehicles, two helicopters from the times of the Cold War, stationed in Roth and Niederstetten at the time, aircraft missiles that formed NATO’s air 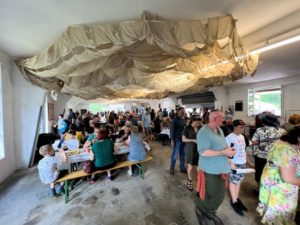 defense, and, the latest addition, a ship’s gun from the German navy destroyer Bayern.

USAG Ansbach’s fire department participated in the event with a static display of their airfield fire rescue vehicle, and volunteers of the fire department were on hand to explain how the state-of- the-art piece of equipment works. 5th Battalion, 4th Air Defense Artillery Regiment Soldiers volunteered and proudly showed off their Avenger vehicle.

One visitor was very impressed, “I am thrilled to see this real-life vehicle and to be able to compare how military vehicles have developed throughout the decades. There are some iconic tanks here and now this modern air defense piece.”

Another tradition of the open house is the Gulaschkanone – a German Bundeswehr term for a Goulash stew served out of a very large kettle called a cannon, which was received with raving reviews by the visitors.

To learn more about the Muna Museum, also read https://ansbachhometownherald.com/local-muna-museum-merges-military-presence-with-past/