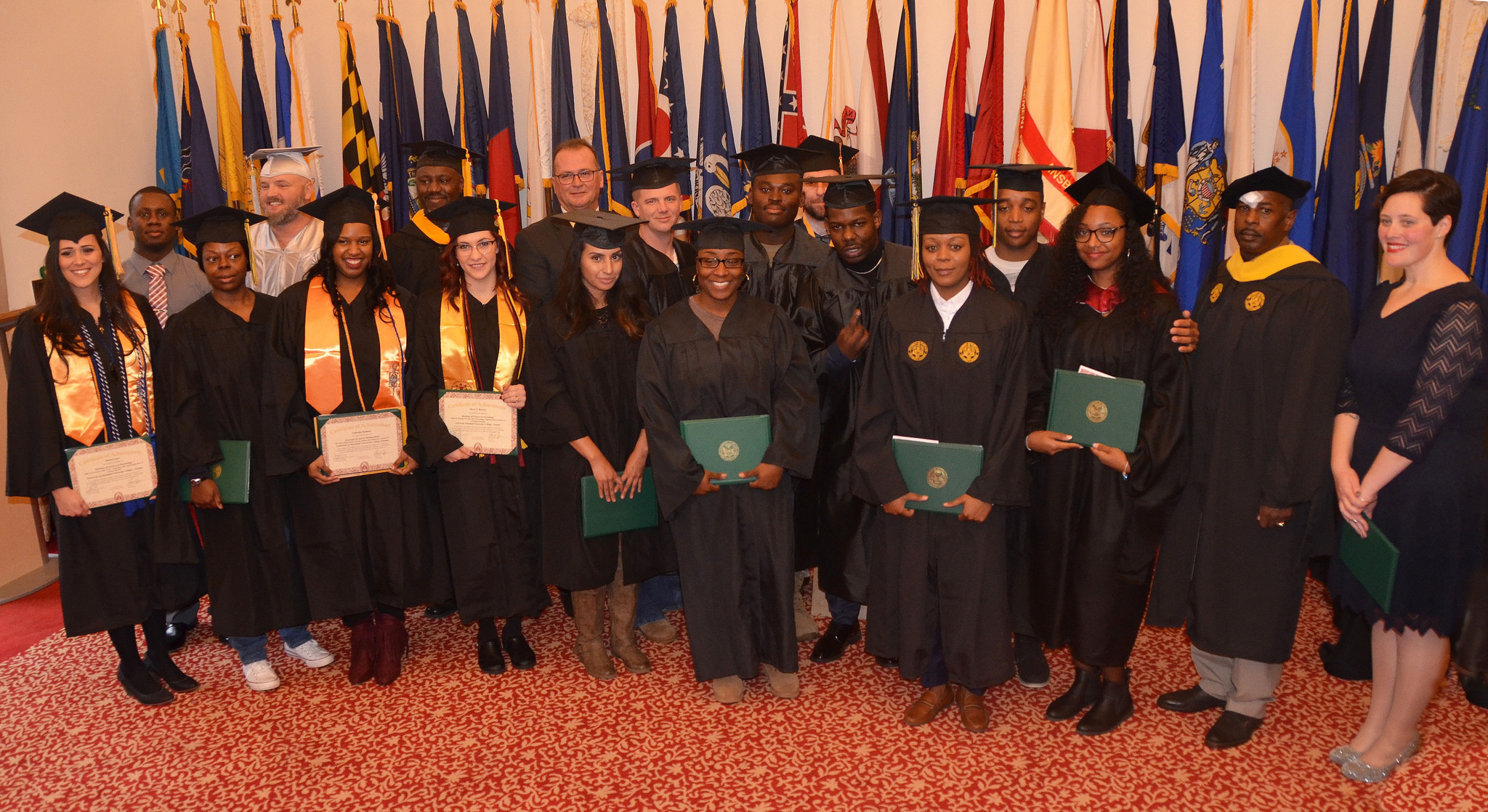 ANSBACH, Germany – The U.S. Army Garrison Ansbach (USAG Ansbach) Army Education Centers held a Recognition Ceremony for 2017-2018 graduates Nov. 16 at 10 a.m. at the Von Steuben Community Center on Bismarck Kaserne. Twenty-one graduates received their honors during the ceremony accompanied by the applause of more than 150 parents, spouses, teachers and community members who turned out to congratulate the graduates.

The ceremony is held annually as part of American Education Week, an annual observance to encourage Soldiers and civilians to continue in pursuit of higher education and increase awareness of resources available in achieving a degree.

Due to service members, family members, veterans and retirees having such diverse schedules and attendance at different schools due to relocations and deployments, the ceremony fulfilled the wish that many attending the event might otherwise not have had the opportunity to experience: to step up front and center before family, peers and classmates for the presentation of their degree.

Many of those recognized had already been conferred their degrees and officially graduated, but had not been honored for their academic achievement publicly.

Some students attending opted for other choices of dress, but shades of black, blue and gray graduation caps and gowns – representing a diverse collection of colleges and universities – filled the place of honor in the front rows.

Mr. Philip Romanelli, USAG Ansbach Deputy to the Garrison Commander, presided over the ceremony. Romanelli, himself a graduate of both Princeton and Cambridge Universities, also served as the guest speaker and in his opening remarks praised the graduates for their drive and tenacity in pursuit of their degrees.

“You have made it here by giving up so many of your nights after long days at work. Instead of relaxing on a weekend you ‘hunkered down’ with your books and your laptop to study. It must have been frustrating, even pretty lonely sometimes and no doubt on occasion it must have seemed pretty tough to you imagining you could see it through to the end.” Romanelli said. “Today is your day; you earned it. You have achieved something you should be justly proud of.”

The Ansbach Military Community is located approximately 40 miles west of the German city of Nürnberg in the Franconian region of Bavaria and is spread across six sites surrounding the city from which it takes its name. Ansbach is home to 12th Combat Aviation Brigade (12th CAB). A new, state-of-the-art 51,000 square foot health clinic facility located in the Urlas Community on Shipton Kaserne was opened in 2016. The community supports more than 10,000 Soldiers, civilians and family members. To learn more about the people and facilities of the U.S. Army Garrison Ansbach (USAG Ansbach) and the people they support in Ansbach, Katterbach and Illesheim, visit the community website at http://ansbach.army.mil