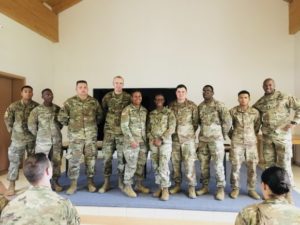 ANSBACH, Germany (October 15, 2019) — “Serving as a Soldier constantly reminds me to always be accountable for myself and the people I lead,” said Command Sgt. Maj. Philson Tavernier, U.S. Army Garrison Ansbach.

Speaking to approximately 110 Soldiers who are halfway through the 7th Army NCOA’s BLC, Tavernier discussed his leadership philosophy in order to provide purpose, direction and motivation.

“I decided to make this profession a career because its values and ethos embodies those of our Nation,” he said. “The U.S. Army gives me a platform to continuously challenge myself to be an exemplary leader for others to emulate.”

Prior to serving, Tavernier said he lacked direction and found himself following the wrong crowds. He enlisted because he wanted to find purpose for his life.

Living by the Army Values will have the greatest impact on the Soldiers that are being lead and the people who are being served, he said.

Other attributes that have governed Tavernier’s military career are discipline, physical fitness, developing subordinates and taking care of Soldiers and their families.

Discipline starts with the individual, he said, and NCOs should set the standard and lead by example at all times. “Be the leader that makes the hard right over the easy wrong; do not be that leader that sees something and turns their head in the opposite direction.”

Physical Fitness should always be our top priority in a garrison environment, because Soldiers who are physically and mentally fit have fewer battle casualties than Soldiers who are not physically conditioned, Tavernier said. “Soldiers with good leadership, high moral, and good physical condition are more alert and take the extra precautions, which save their lives and reduce their casualty rates.”

When developing Soldiers, it’s important to challenge them, according to Tavernier. “But always deliver constructive criticism, not destructive micromanagement.”

Counseling is one of the most important tools in developing those we lead, he said. “It serves as a compass check; your subordinates will never know if they are meeting your expectations unless you establish a dialogue with your subordinates.”

The greatest assets the military has are Soldiers and their families. Taking care of Soldiers means, we have the responsibility to ensure they are properly trained, to fight and win our nation’s wars, he said.

“We must lead our organizations like it is our last day every day,” Tavernier said. “Taking time to develop our subordinates is similarly important to recognizing our subordinates when they perform with excellence.”

Professional development courses such as BLC, present the leadership building blocks Soldiers will use throughout their military careers. “The network and friendships established during these courses, helps to yield huge dividends as the Soldiers continue to ascend the enlisted ranks,” he said.