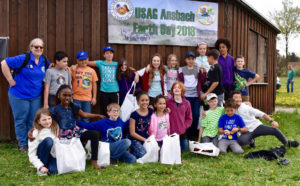 ANSBACH, Germany (April 24, 2018) – About 100 three to fifth graders from the Katterbach Elementary School and home-schooled students took the opportunity to hone their senses during the annual Earth Day event at Soldier Lake on Urlas.

“This was a great opportunity for young students to learn more about the environment and why we have to be responsible stewards of our environment,” said USAG Ansbach’s Commander, Col. Benjamin C. Jones. And, “it is a neat way to learn about bees, water ecology, beavers, and other important aspects that impact on our environment.”

Subject matter experts, from the local Ansbach area, manned seven different information booths, providing some insights into the complexities of nature and the environment. Like Norbert Hauer, a beekeeper and chairman of the local Beekeeper Association, who explained to every group of elementary students the organization of a beehive; the tasks among the queen bee, the worker bees and the drones living in the colony. How pollen is being turned into honey, including the vital importance of blossoms being pollinated by bees.

At another station, Environmental Experts, Dr. Margit Pfeiffer and Nico Krömer, highlighted the soil as a living structure and why it is important to preserve it. 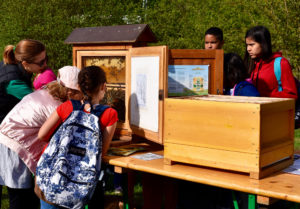 Markus Kleiner, from the local Aquarium and Terrarium Association, explained the different types of fish and water insects living within Soldier Lake. Christina Korschinek from the Ansbach Water Works described the local water cycle and what type of fauna is found in clean or waste waters.

The eyesight of bats is not very efficient, according to Matthias Weiß, who described the habitat and behavior of bats. He pointed out that bats compensate their poor eyesight by emitting sounds, which reflects from objects within their path as they are flying. The generated echo in turn provides them almost instantaneously with vital information about their own speed; about the distance, the size and even the surface of an object. Bats are also very efficient and natural pest control because they love insects, according to Weiß.

At the beaver station, Harald Fritsche from the Ansbach environmental office and beaver expert Gerhard Engelhard explained the “natural traits” of beavers of building dams on lakes and rivers with surrounding trees and shrubbery. 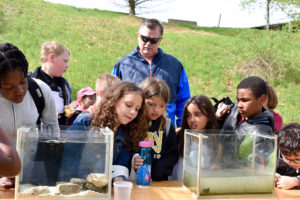 Gerda Koss, environmental specialist for U.S. Army Garrison Ansbach and creator of the initial Earth Day event at USAG Ansbach ten years ago took care at the seventh and final “Arts and Craft” station that each student created their own candle made of beeswax, to take home.

As in previous years, Earth Day 2018 was planned and organized by U.S. Army Garrison Ansbach’s environmental experts of the Department of Public Works. It was conducted in cooperation with counterparts from the City of Ansbach, according to Pia Amberger, environmental specialist for DPW.