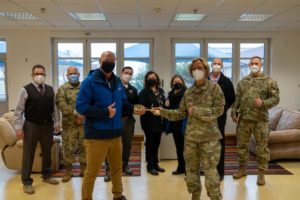 ANSBACH, Germany (Feb. 22, 2022) – Get ready Ansbach, the United Service Organizations Inc. (USO) is coming to town. The Soldiers “home away from home” will soon be opening the first-known USO at U.S. Army Garrison (USAG) Ansbach.

Up until now, the USO has been supporting USAG Ansbach in the Katterbach and Illesheim areas with mobile support. They have put on several events for the Soldiers such as the Super Bowl, barbecues, and more with support having to travel up from their Bavaria center at USAG Bavaria.

“It’s been some time that the request has been out for the USO to get out here in Ansbach,” said Grant McCormick, regional vice president, USO Europe, Middle East, and Africa. “We have been out here conducting programming with different types of support, but as we have seen Ansbach grow and get established we’ve noticed there is a need here and it’s important to bring USO goodness into Ansbach for the Soldiers, so we’re pretty excited about that.”

Since its formation, over 80 years ago, the USO has been providing support to our nation’s military and their families as they defend our country and its freedoms. With more than 250 centers worldwide, USAG Ansbach will now have a center it can call its own.

“What will make supporting Ansbach so much easier for us is that we can do it from here instead of coming in from Grafenwoehr,” said Carly Harris, USO area four director. “It’s going to serve as a hub to be able to support the outlying kasernes, not the least of which is Storck Barracks. Our intention is to provide as much support to the RAF (Regionally Allocated Forces) as we can.” 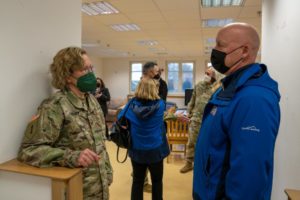 “That’s the powerful piece of having this location, it’s our ability to reach. Having people here that have their thumbs on the pulse of the needs of the Soldier in Ansbach, within this community, is a very big deal,” said McCormick.

The USO is looking to open the USAG Ansbach Center soon with the building expected to be fully furnished and in use this spring. “We are committed to coming soon and providing Ansbach with USO goodness,” said Harris.

“The enduring presence of the USO is an incredible opportunity for our single Soldiers to volunteer and take advantage of all the programs and events the USO provides. This presence will greatly increase the resiliency of our Soldiers and our Ansbach community,” said Command Sgt. Maj. Eric Bohannon, USAG Ansbach Command Sergeant Major.

The USAG Ansbach location will start off as an unstaffed center, utilizing volunteers to man the center. The USO will also be utilizing Joint Expeditionary Team Members that will travel and provide support on a consistent basis to conduct programming throughout Ansbach.

“The resiliency of our Soldiers is extremely important to our organization and having this center here in Ansbach will provide exactly that,” said McCormick.

The USO Center at USAG Ansbach will be able to provide Soldiers the ability to connect with their families and their homes in a variety of ways. It will provide a great number of amenities such as internet, refreshments, entertainment and a place to relax.

Different types of programming will also be offered at the center. Gaming tournaments, poker tournaments, bingo, trivia, and programming for families like extravaganzas for kids and parents as well as a space for units to hold unit barbecues.

“Having the USO present in the Ansbach community is a very big deal for us and we are very pleased to open the first-known USO Center in Ansbach,” said Col. Karen Hobart, USAG Ansbach commander. “This is huge for our Soldiers and families and what it will do for their morale, we’re excited for what this will do for resilience.”

Initially, the center’s hours will be based on the needs of the community, with volunteers from within the community manning the center. As the center is staffed the hours and the services will grow more robust in support. 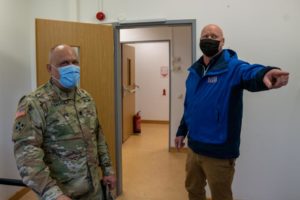 “I want to thank Colonel Hobart, Lieutenant Colonel Cisneros, Command Sergeant Major Bohannon, and the entire USAG Ansbach command team for all the hospitality and for making this a reality because it was truly them that drove this effort,” said McCormick.

“There has been a great deal of love in preparation for us coming and we want to thank all of those that have done what they have done here to get it ready for us,” said Harris.

The USO Center in Ansbach will be located at Building 5510 on the Katterbach Kaserne next to the bowling center and across from the dining facility. Currently, there are 24 USO Centers in Europe, making USAG Ansbach the 25th for the USO and the first-known in Ansbach.