ILLESHEIM, Germany — Repetition is important if you want to be good at a certain task. For some, that may require traveling to another country to receive specialized training. 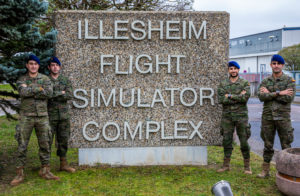 Such is the case at the flight simulator facilities located at Storck Barracks in Illesheim, Germany, where rated (pilots) and non-rated (mechanics, etc.) crew members throughout Europe can come and perform in-flight tasks with less risk at reduced costs than that of real-time flight tasks.

The facility is among the largest buildings on the post. Placed near rotational forces maintenance hangers and the flight line, it is easy to find for all who come to train there.

“We have four devices that are readily available,” said Dexter K. Chun, facility manager, Illesheim Flight Simulator Complex. “We have the Apache Longbow crew trainer, the UH-60A/L Black Hawk simulator, the CH-47F Chinook TFPS (Transportable Black Hawk Operations Simulator) and the AVCATT (Aviation Combined Arms Tactical Trainer), so we can train more than one crew at a time.”

Once inside the simulator, personnel can safely perform their flight duties and be given immediate feedback on how they performed.

“Flight time in the simulator is important because it allows us to practice certain procedures which we are not able to practice in a real aircraft,” said Capt. Enrique Muńoz Manjón, Ch-47 Chinook helicopter pilot, Spanish Army Aviation Brigade, “mainly because the risk is too high.”

Housing the simulator facilities in Germany provides better opportunities for U.S. and allied flight crew members, giving them the chance to train without having to travel across the globe.

“Normally we would need to fly all the way to CONUS, Fort Bragg, Fort Rucker or wherever they have availability for the simulator training, and that’s a great expense,” said Billy Maloney, International Military Student Officer, IFSC. “Here, it’s pennies instead of dollars.”

Having a number of units either permanently stationed in Europe or a part of a rotational force, the training remains available to those who need it.

“This is the last of the simulator facilities that Europe maintains,” Chun said. “So I think its location is perfect because of ease of accessibility for all the units that use it.” 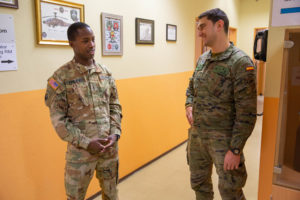 at their individual crafts. Unit stickers, patches and numerous other relics display the gratitude that personnel extend to the cadre for the excellent support provided over the years.

“We have zero defects, zero complaints,” Maloney said. “Each customer who comes here leaves shell-shocked to the point where they cannot believe how supportive, not only the staff, but our command is of their mission. There’s a strong camaraderie with 12th CAB (Combat Aviation Brigade) and rotational forces that support them one hundred percent.”

With the aviation sector of the military being exclusive, by way of experience, having time to bounce ideas from one to another helps allied soldiers to become more in tune across the board.

“We have already deployed as an organization with our allies, especially the United States,” Manjón said. “If we get to the point where we have to fly with another U.S. crew, we are better prepared, so it is important to keep our training with our allies.”

In an ever-changing world, it is important that relationships and bonds be made strong during peacetime. Having allied forces training together gives them the environment to learn about each other professionally and personally.

Interoperability is key to the Army Vision— it is critical that the U.S. stands side-by-side with its allies and partners to maintain overmatch and increase lethality against future threats.

Those crew members who are interested are welcome to set up an available training time and take advantage of sharpening old skills while gaining new ones. The experience of the training offered is sure to be worth the travel.