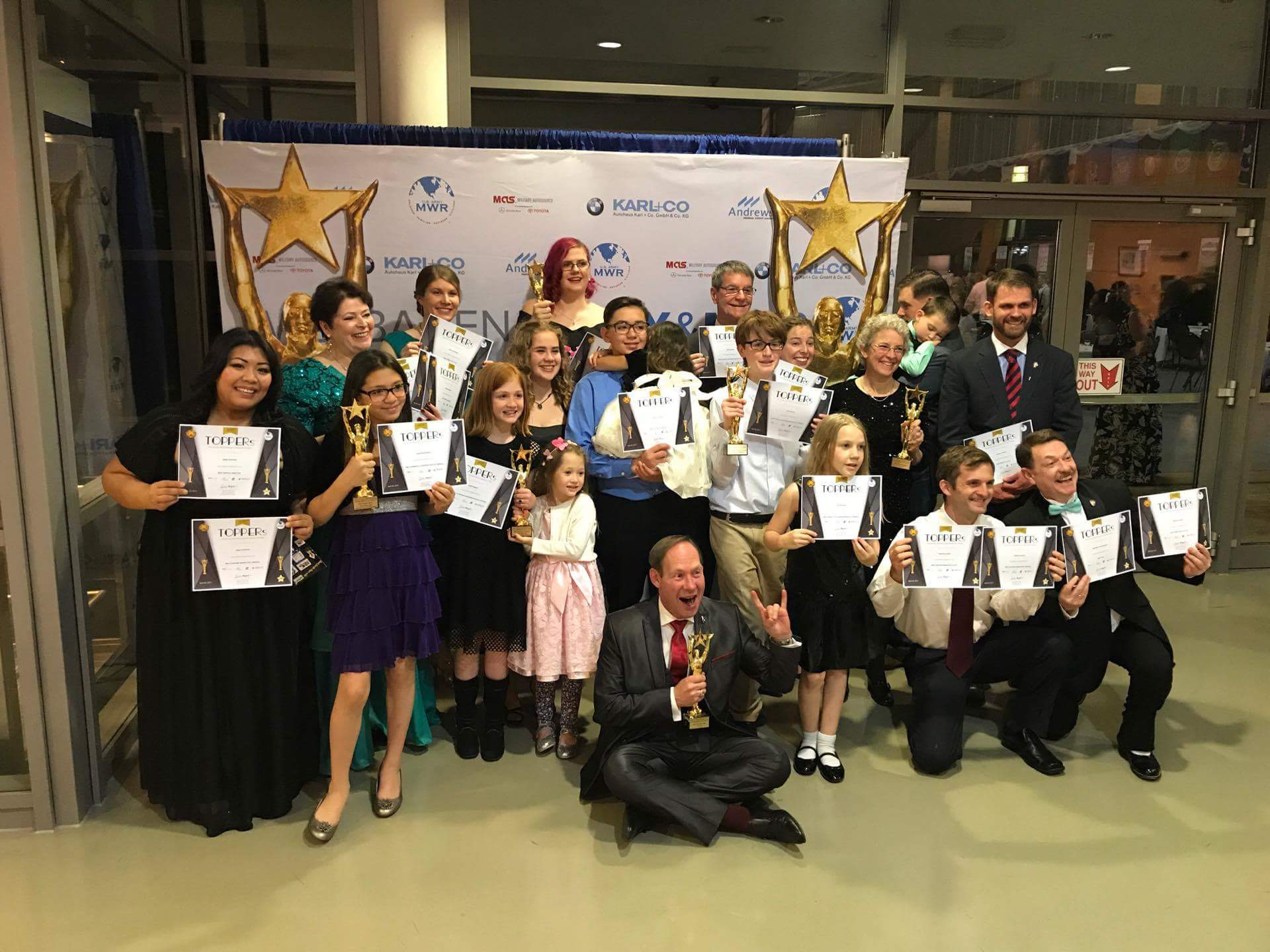 WIESBADEN, Germany (May 2, 2017) – This year’s Toppers Awards, a gala ceremony that celebrates Army Europe community theater during the 2017 season, were held at U.S. Army Garrison Wiesbaden Saturday, and USAG Ansbach’s own Terrace Playhouse was among the winners this year.

For One Man, Two Guvnors, Katherine Wellman won best stage manager for a play, James “JD” Dill won best actor in a play, and Cassandra Ferguson won best actress in a featured role in a play.

Vikki Hanrahan, the director of the Terrace Playhouse, believes the awards ceremony to be fruitful for the military community theater programs across Europe.

“It’s an opportunity to highlight the programs in addition to recognizing the volunteers,” said Hanrahan. “You get to meet people from the other communities and share stories.”

IMCOM-E sends adjudicators around Europe to different U.S. military installations during a six-week time period to see and judge community theater productions. Nominees don’t know they have been nominated until they are at the event. 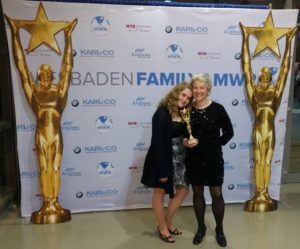 Lynn Daniels, the environmental chief for USAG Ansbach, traveled with dozens of other community members from USAG Ansbach to the Toppers ceremony. She had played the djembe, a West African drum, for the production of Lion King Kids. Before the ceremony, she did not know she would be nominated for her performance, let alone that she would win.

Daniels only started playing the djembe in the states before her arrival in Germany in 2016. She and her daughter Annika had previously been part of the Terrace Playhouse’s production of The Sound of Music, and when Annika was joining the production of The Lion King Kids, Lynn told Hanrahan that she played the djembe. The play incorporated Lynn’s drumming during the breaks between scenes.

“Theater is particularly important in a garrison because people come and go so often,” said Daniels. “The theater community brings together people from all walks. We have military in there. We have civilians like myself. We have family members like my daughter, and you have a whole group of people that you normally wouldn’t be around. And you do have kind of a family, and you become very close with them. You’re basically with them many hours a day for many weeks, and they become your new friends and your new family.” 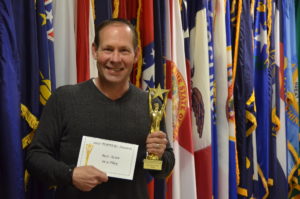 For his role as Francis Henshall in the comedy One Man, Two Guvnors, James “JD” Dill won best actor in a play. Like Daniels, Dill had previously been in the Terrace Playhouse’s production of The Sound of Music. One Man, Two Guvnors, a British adaptation of an 18th century Italian comedy, involved broad humor and breaking the fourth wall, wherein Dill’s character interacts directly with the audience.

Dill said the physical comedy aspect and developing a British accent made this a difficult role, but he credits the teamwork of everyone involved in the production for his win.

“It’s an individual award, but it’s not an individual achievement,” said Dill. “This is the most synergistic cast that I have ever been a part of. From the ‘guvnors’ to the waiters in the show to the plant – Cassandra [Ferguson], who was my audience plant – everything just fell together and it felt so good and so right.”

Ferguson, for her make-up artistry was nominated for One Man, Two Guvnors. She also won best featured actress for her role as the audience confederate (or the “plant”) in the same play. 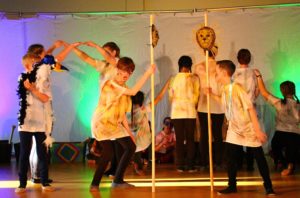 The child players perform a scene in The Lion King Kids. The play was nominated for 16 Toppers and won three. (Courtesy photo by Jamie Storton)

“Everyone who has contributed to one of this year’s entries is already a highly valued member of a winning team,” said Michael D. Formica, Installation Management Command Europe director, at the event. “Your talent, dedication and hard work enrich us all. On behalf of the total Army Europe, Air Force, and international families, I thank you for providing top-quality entertainment events in the tournament and throughout the year. Congratulations to all of you for a job well done.”

Dane Winters, IMCOM Europe entertainment director and one of the evening’s masters of ceremonies, said this year’s Toppers competition was one of the best he has seen, and hardest for the judges to pick winners.

“The shows this year were really incredible, I mean professional-quality stuff,” he said. “Everyone was so energized and so excited.”

The 49 Toppers awards and numerous special awards were presented by leaders from military communities throughout Europe, with some star-studded help. 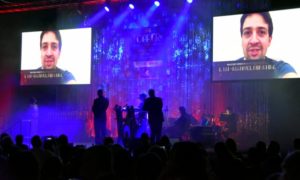 Lin-Manuel Miranda, Tony-award winning actor, playwright and composer, and creator of the Broadway hits In the Heights and Hamilton, announces the winner of Best Military Performance in a Musical. (U.S. Army photo by Jacob Corbin, USAG Wiesbaden Public Affairs)

“I’m thrilled to be back this year to help celebrate all your hours of hard work and outstanding achievements,” said Lin-Manuel Miranda, Tony-award winning actor, playwright and composer, and creator of the Broadway hits In the Heights and Hamilton, in a pre-recorded video message announcing the winner of best military performance in a musical. “Thank you for your sacrifice and your service.”

Below is a list of the nominations and wins for the Terrace Playhouse:

For more on the 2017 Toppers, visit the article here.

For more on the Terrace Playhouse, visit the directory entry at www.ansbach.army.mil/DirectoryT.html#Terrace_Playhouse or the Family and Morale, Welfare and Recreation page at https://ansbach.armymwr.com/europe/ansbach/programs/terrace.