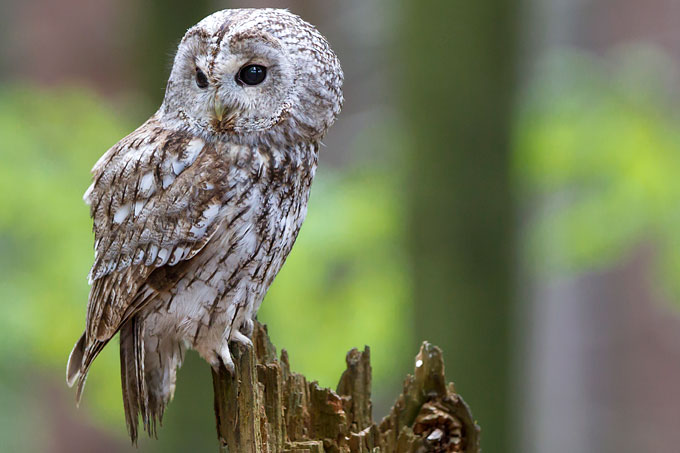 ANSBACH, Germany (Jan. 30, 2017) — The German Nature And Biodiversity Conservation Union, or NABU, and the State Federation for Bird Protection in Bavaria, or LBV, have awarded the Eurasian Tawny Owl (Strix Aluco, Waldkauz) the title of Bird of the Year for 2017.

The tawny owl, also known as the brown owl, is a stocky, medium-sized owl species commonly found in woodlands across much of Europe and Asia. Next to the long-eared owl, the tawny owl is one of the most common owls in Central Europe.  They need a richly structured landscape, in which forests and groups of trees alternate with open areas. Tawny owls are cavity-nesting birds that breed mainly in tree holes where they can protect their eggs and young against potential predators.

This type of owl is non-migratory and highly territorial, which is why many young birds starve if they cannot find a vacant territory once parental care ceases. Tawny owls are about 40 centimeters tall, have very fine senses, and hunt during the night. They see particularly well with their big, dark button eyes and can hear even the slightest noise from 100 meters away. The special soft and furry upper surface of their feathers makes it possible for them to approach their prey or any potential predator almost silently and take them by surprise. Their menu mostly consists of rodents, small birds, frogs, insects and earthworms.

Tawny owls can live up to 20 years. A couple stays loyal to each other and breeds only once a year. The two to six eggs are hatched within 30 days by the female alone. During that time the male is responsible for the food supply. After the young hatch both parents take turns feeding them inside the nest for the first 35 to 39 days and another two to three months after they fledge. At five months the young owls already show the characteristic grey-brown or red-brown plumage of the adults and disperse to find a territory of their own.

The tawny owl was chosen by NABU and LBV as a representative of all owl species and to promote the preservation of old trees with hollow trunks and holes as well as to raise awareness among the general public of the needs of hole-nesting birds and animals.

An estimated 43,000 to 75,000 breeding pairs call Germany their home. Even though the owl population can be considered stable in the long term, the continued breeding success highly depends on the quality of their habitat. The felling of old hollow trunks, monoculture forests and cleared agricultural landscapes without any food supply are the greatest threat for these nocturnal hunters. Owls are vital components of biodiversity and we should do everything we can to protect them.