Connect to protect – Support is within reach: September is Suicide Prevention Month 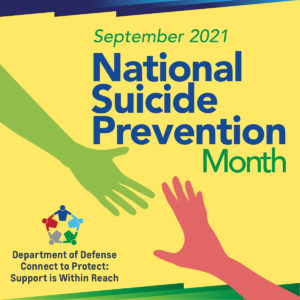 The Department of Defense (DoD) is committed to preventing suicide among Service members, veterans,and their families. Suicide prevention is a DoD priority throughout the year. Still, September —Suicide Prevention Month (SPM) —is a time when the Department brings added attention to the complex issue of suicide and emphasizes the valuable resources and support available year-round. This year, the DoD’s SPM theme, connectedness, highlights the critical role relationships and interpersonal connections to family, friends, the community, and resources can play in preventing suicide.

In support of this theme, the 2021 SPM slogan is Connect to Protect: Support is Within Reach, emphasizing connections with others and the community, as well as with suicide prevention resources.

Certain factors like substance abuse and untreated depression can lead to higher risk of suicide just as having a trusted group of friends can help protect you.  The warning signs of suicide are indicators that a person may be in acute danger and may urgently need help. 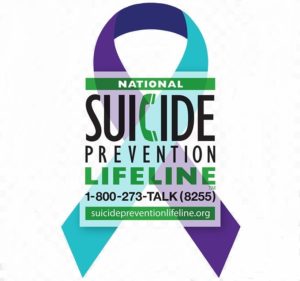 Why do people kill themselves?

There are many misconceptions and misunderstandings about suicide.  There is no single answer to “Why do people kill themselves?”  There are many factors, such as traumatic and difficult life events, that can contribute to suicide risk.  An estimated 90% of people who take their own lives have a mental health condition, such as a depressive disorder, bipolar disorder, anxiety disorder, schizophrenia, or substance use disorder.  Individuals with depressive disorders are especially at risk for suicide, but this risk is not overwhelming.  Most people living with a depressive disorder or other mental illnesses can receive help through awareness, education, and treatment.  The most common source of suicide risk is when a mental health condition is mistreated or left untreated.

How do I know whether someone is considering suicide?

You can look for warning signs for suicide that are related to the way the person is talking or acting.  However, it’s not always obvious that someone is at risk, so the best way to know if someone is thinking about suicide is to ask them.

If I ask someone whether they’re thinking about suicide, will it put the idea into their head?

No.  Research has found that asking someone whether they’re having suicidal thoughts does not give them suicidal tendencies.  The actual risk is not talking about suicide with someone who may be in crisis.

What should I say to someone having suicidal thoughts?

There are several ways to talk to a family member, friend, co-worker, or acquaintance thinking about suicide.  Begin a dialogue with someone, asking the right questions, and knowing what to say and do based on what you learn from the conversation.

Is a person at increased risk to attempt suicide if they’ve been exposed to it in their family or has had a close friend who died by suicide?

Do people attempt suicide to prove something or get sympathy?

Suicide attempt is a sign that someone is in a crisis.  It should always be taken seriously and never ignored.  Without intervention and proper treatment, a person who has attempted suicide is at risk for attempting suicide again. 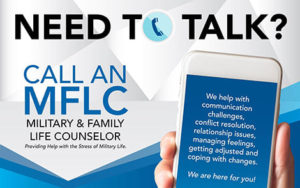 Why do people attempt suicide when they appear to feel better?

One theory is that a person who is having suicidal thoughts doesn’t have enough energy to attempt it.  They may regain some energy, but their feelings of hopelessness remain, and the increased energy level could contribute to acting on suicidal feelings.  Another theory proposes that a person may “give in” to their feelings of hopelessness.  This relieves some anxiety, which makes them appear calmer in the period preceding a suicide attempt.  The most important takeaway is to maintain an open dialogue with someone who has recently been in crisis; never assume that those feelings have gone away.

If a person’s mind is made up can they still be stopped?

Yes.  Never give up on someone who is thinking about suicide, even if they’ve said they’ve already made up their mind.  A person determined to attempt suicide often experiences feelings of hopelessness and a desire to stop their suffering.  You can help a person in crisis by giving them hope and by helping them regain perspective, which can lessen their suicidal thoughts or prevent them from attempting suicide.

Here are five action steps you can take to help someone in emotional pain:

Suicide prevention is a collection of efforts to reduce the risk of suicide.  These efforts may occur at the individual, relationship, community, and society level.  Suicide does not have one single cause.  Suicide is often preventable.  You’re not alone.  Help is available.