Deasy also said that beyond making people aware of resources, it was a call for community members to look out for one another.

“We hope to refresh in [the runners’] minds that everyone can have hardships, so everybody’s in need,” said Deasy. 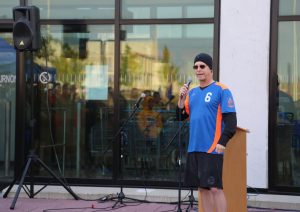 Col. Christopher Waters, 12th Combat Aviation Brigade commander, speaks to USAG Ansbach about the importance of taking care of one another as part of suicide prevention efforts.

“You want to do things to prevent it from happening, not manage it after it happened,” said Waters. “No matter what your troubles are in life, if you are emotionally sound, physically fit, mentally sharp and you believe in something bigger than yourself, you’re going to be able to handle adversity. A big part of that is fitness, nutrition and sleep.”

As part of physical health, Waters also touched upon the subject of substance abuse.

“Don’t put chemicals in your body – cigarettes, drugs, even alcohol,” said Waters. “Alcohol is a depressant. It alters the way you think.”

Waters also talked about the social aspect of suicide prevention.

“If every single one of us takes care of our mates and our squad, we don’t have a problem,” said Waters. “It is not offensive to ask somebody if they’re doing OK.” 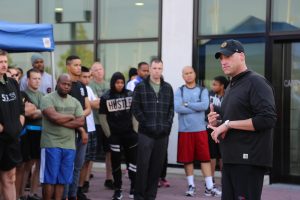 “The Army and this garrison have great programs and resources, dedicated professionals with the skillsets and experience to handle any situation,” said Cuvellier. “No problem is too big that the right attention, care and counseling can’t address and fix.”

“Suicide prevention is all about taking care of the other person and being there for them when they need it,” said Michael Noyes, alcohol and drug control officer for ASAP, who was also at the event. “You’re never alone.” 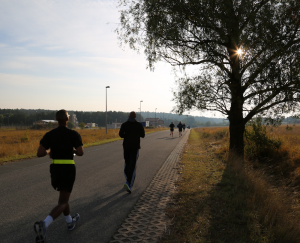 The run followed a course from the Urlas Exchange Mall parking lot around Army Lodging, into Urlas housing and then back to the mall where the USAG Ansbach Sexual Harassment and Assault Response and Prevention (SHARP) program and ASAP handed out promotional material. American Legion – Ansbach Post 1982 handed out water, and Better Opportunities for Single Soldiers talked to Soldiers about their programs to connect Soldiers to each other and to the community.

For more on suicide prevention, including the USAREUR and U.S. Army websites, the Military Crisis Line, and the National Suicide Prevention Lifeline, visit www.ansbach.army.mil/DirectoryS.html#Suicide_Prevention_and_Awareness.