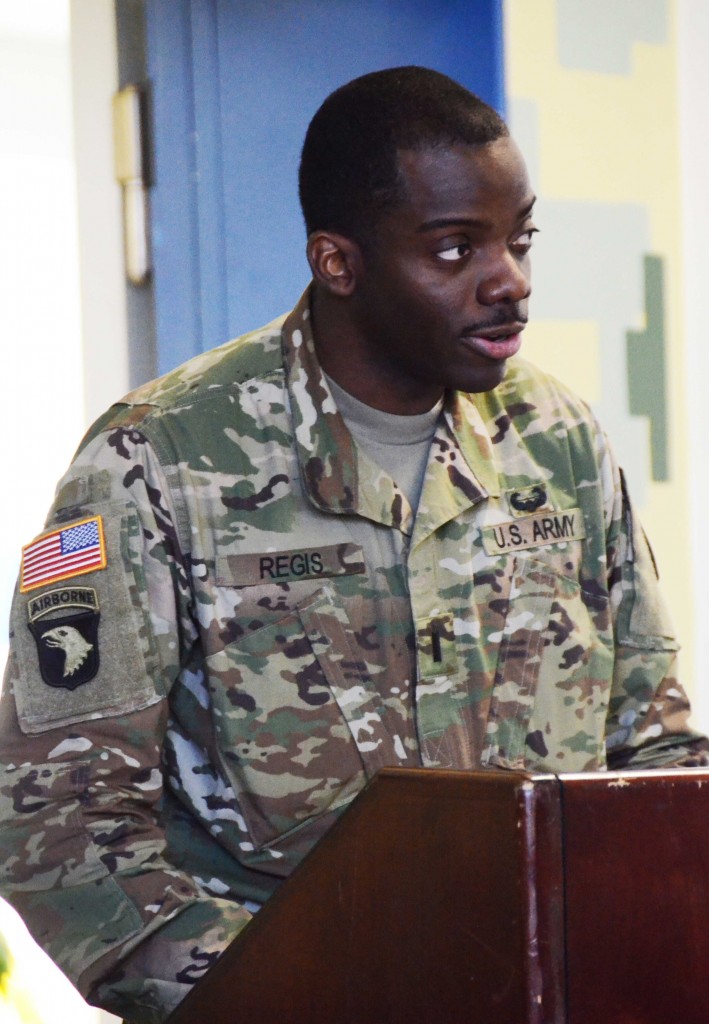 The American federal holiday, which falls on the third Monday of January – and which was Jan. 18 this year – marks King’s Jan. 15 birthday and celebrates his accomplishments and impact on the Civil Rights Movement.

During Ansbach’s observance, Chaplain (Maj.) Christopher Moellering, 12th Combat Aviation Brigade chaplain, opened the ceremony with an invocation derived from a prayer that King spoke in the summer of 1953.

Regis said that by 1971 more than 1 million signatures filled a petition to formally establish the public holiday, which resulted in no action from Congress. Nevertheless, the movement gained momentum throughout the next decade. Although a bill to make King’s birthday a national holiday failed to pass in 1979, a six-million-signature petition brought it back to Congress several years later. On Nov. 2, 1983, President Ronald Regan signed a new bill that had passed the House of Representatives with a count of 338 to 90.

In describing the lasting meaning of the day, Regis cited a well-known Dr. King quote: “Life’s most persistent and urgent question is, ‘What are you doing for others?’”

“Each year, Americans answer that question, coming together on King’s holiday to serve their neighbors and communities,” Regis said. “The day represented the opportunity to start the year off right, making a positive impact on the community.

“During his lifetime, Dr. King encouraged all to pursue the purpose and potential of America,” Regis added. “He strived to realize the dream: equality and the nation that affords freedom and justice for all.”

After Regis’ remarks, children from the Teen and Youth centers talked about King’s “I Have a Dream” speech and how his ideas in that speech apply today.

“The dream is for races and genders to interact without placing each other in a hierarchy of values based on those characteristics, but on personal merit that everyone has the chance to earn,” said Juliana Saunders, a USAG Ansbach family member and teen. “It is an honor to live in a world with equal opportunity, to stand before you today, to have my voice heard. It is an honor to live the reality of the dream.”

Geniah Nells, another Ansbach youth, spoke next on the same subject.

The ceremony wrapped up with a dance performance from Ansbach youths, and an awards presentation.