Soldier at Olympic opening: ‘My heart was full of American pride.’ 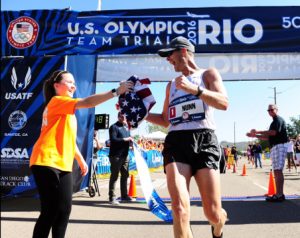 RIO DE JANEIRO (Aug. 8, 2016) – Whether marching into Maracanã Stadium as part of Team USA or watching on television, U.S. Army Olympians felt great pride during the opening ceremony of the Rio Olympic Games.

For race walker Staff Sgt. John Nunn, the charm of walking in his third Olympic opening ceremony was being able to simultaneously communicate with his 12-year-old daughter in Texas.

“The best part of my evening was face-timing with Ella as I was walking into the stadium,” said Nunn said. “It doesn’t matter where I am or what amazing things are going on, getting to facetime with Ella will always be the highlight of my day.”

Nunn said he also enjoyed watching the reactions of first-time Olympians during the event.

“My heart was full of American pride as I walked in with my fellow countrymen,” Nunn said. “It is such an honor to represent this amazing country that I live in and love. I am grateful for the Army. It is an amazing organization that always pushes me to be better than I am.”

Some of his Army-Olympian teammates, like rugby coach Capt. Andrew Locke, were unable to join the parade of nations during the opening ceremony.

“The men’s team was able to walk because they don’t start competition for another three days, but for us we had to just rest and prepare,” Locke said.

“But we watched it and it was breathtaking,” Locke said. “Everybody got dressed up and we went downstairs, and we hung out with all the Team USA Olympians and cheered them off before they headed to the stadium.”

Locke, who arrived in Rio on July 31, said his experience so far has been a good one.

“The food, living conditions, laundry, transportation, logistics – everything has gotten a little bit better every single day since we’ve been here,” he said.

“The people, themselves, have been outstanding in terms of the hospitality and the warm reception that we’ve received. I can only imagine the work that goes on behind the scenes just to run this event.”

They were still in Mammoth Lakes, California, where they will train at 8,500 feet above sea level until the last minute before their races next week. 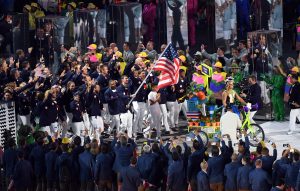 “When the opening introduction on NBC came on the television, it became very real to me that my Soldiers were going to get a chance to shine in Rio,” Browne said.

“I am proud that my guys have worked hard, sacrificed and prepared for this moment. I know they will be great representatives of the United States and ambassadors for the U.S. Army.”

“I didn’t get to walk the opening ceremonies,” Guzman said. “For me, I felt honored not only to represent Team USA and USA Boxing, but the Army WCAP and all the men and women currently serving our country. We got two wins (Saturday) so it was a great start for us.”

“The opening ceremonies will be something that I will never forget for the rest of my life,” Schrimsher said. “It was incredible!”

WCAP Modern Pentathlon coach Staff Sgt. Dennis Bowsher walked in the London 2012 opening ceremony, but this year he was en route to Brazil to serve as coach and training partner for Schrimsher.

“We flew over night Friday night to head straight to our training camp, so I missed the opening ceremonies,” Bowsher said. “We get into Rio on August 15.”

Whether or not they had the opportunity to walk in the opening ceremony, the Army-Olympian athletes and coaches are all proud to be representing the U.S. Army as part of the U.S. Olympic team.

“I’m excited to be wearing the USA kit,” Nunn said, “with the Army kit in my heart.”

To see this story as it appears on the Army News Service, visit www.army.mil/article/172952.