Blog, Featured, Moving within and departing our community 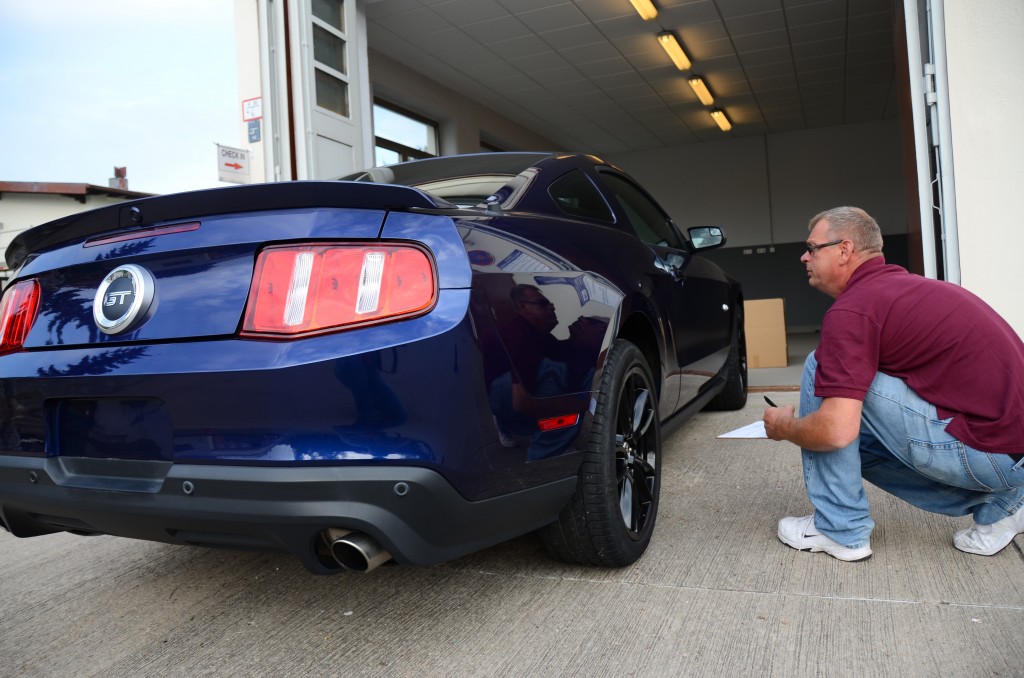 ANSBACH, Germany (July 14, 2015) — Now is the peak season for the U.S. Army Garrison Ansbach Vehicle Processing Center at Barton Barracks, during which VPC team members frequently process 10 to 20 privately owned vehicles turned in to the facility each work day.

This higher-than-average operational tempo is a result of a higher number of permanent changes of station for Soldiers, Family members and civilians. Although the VPC staff is busier than normal, this doesn’t mean the turn-in inspection standards have relaxed at all.

This doesn’t mean the vehicle needs to be showroom clean, said Paul A. George, government contracting officer representative and traffic management specialist with the Military Surface Deployment and Distribution Command, but it must meet specific USDA requirements.

“They don’t have to shampoo their cars,” said George. “They just have to make sure that it’s clean. A lot of people like to use the term ‘showroom clean,’ but showroom clean is not going to be easy for anyone who has a car that’s five or six years old, or if they have family. But it has to be clean.”

It should also be dry at the time of turn-in.

Vehicles first undergo an agricultural inspection to ensure they comply with USDA importation standards. George outlined a cleaning process that will help customers pass the VPC inspection without issues. A POV owner’s best friends are a small, powerful flashlight, a vacuum (dry) and a damp cloth.

1: Starting at the front of the vehicle’s interior, move the front seats as far back as they will go, take out the floor mats and vacuum the floor thoroughly, George advises.

2: Take a brush and sweep along the groove of the door jambs, not roughly but smoothly.

3: With a flashlight, examine the sides of each seat, and then in and around the middle console. Inspect those places for any debris, dirt, pet hair, plant detritus, old food, coins, gum, trash and anything else. Repeat that process beneath the seats and then vacuum beneath the seats.

4: Clean and vacuum the floor mats. Once finished, place them back in the vehicle and assure that they are dry.

5: Wipe down all hard surfaces with a damp cloth.

6: Move the front seats all the way forward and repeat steps 1 through 4 for the backseat rows and any other extra seat rows as applicable.

7: Vacuum the trunk area and wipe down hard surfaces with a damp cloth. Assure this area is dry.

9: George said some vehicles such as SUVs and vans have back windows that can flip up or out. These can develop mold or mildew, which needs to be eliminated before shipment. Assure window seals are free of debris.

10: Wipe down and clean door frames to eliminate debris.

11: Wipe down wheel wells, at least where your palm can reach with a cloth.

George recommended that shortly before arriving to the VPC for an inspection is the best time to inspect and clean the engine compartment. Once again, use the flashlight to inspect it and check for leaks.

“Look to see if there’s any pine needles, dirt, dead bees, seeds or anything like that,” said George. “Then they need to vacuum that area out and either wipe it off or wash it off. It’s however they want to clean it, it has to be clean.

Ensure the EPA emissions sticker is present and intact. Look for the words “Vehicle Emissions Control” to the word “Catalyst.” This sticker is a must, and its absence will result in the vehicle’s rejection during the inspection.

The DOT sticker is located on the driver’s side doorframe or in the engine compartment. This is also known as the MFD, or Manufacturer’s Datasheet, and will include the date of manufacture and the vehicle identification number as well as indicating vehicle safety standards.

“If this sticker is missing, or illegible, proof in the form of a stateside title (must state that the vehicle meets DOT requirements), stateside registration, or CARFAX report (www.carfax.com) must be provided to the VPC on the date of turn-in before your car can be accepted,” states the turn-in section of the PCS My POV website.

Nonfunctional emergency brakes: “That has to be working,” said George. “The best way is, if you know you’re going to turn your car in, start using it. A lot of people don’t use it because they either have automatics or they put it in first gear because they have standards, or they put it into reverse because they say it’s not going to go anywhere. But they have to understand that it has to work because it’s a Department of Transportation requirement for safety purposes.”

George said contractors will apply the emergency brake and give the car a bit of gas just to check if it’s working. If the car doesn’t drive forward or in reverse it’s good to go.

“Most of the cars are put on trucks that have a slight slope, and if your ‘E-brakes’ don’t work and they put it on there, it’s an issue,” George said. “Or if it goes on the vessel, it’s not always going to be flat. There will be tie-downs, and they won’t be on the axel; it will be on the tire.

“That is very important,” he added. “That’s a safety issue … not just in the states, but here in Europe. The truck drivers have to be sure that when they load something that it’s not going to move.”

Fluid leaks: Ensure no fluids are leaking from the vehicle, including anti-freeze and especially oil.

Old/dying battery: Though the battery may still start the vehicle, if it’s getting old, it may be time to replace it. When a battery dies in transit, that leads to extra work on the part of contractors and delays during shipment.

According to AAA, the average battery should be replaced every three to five years.

If you need extra assurance or you don’t feel confident about your vehicle passing the inspection during a walk-in or an appointment, the Ansbach VPC can take a quick look at your POV.

A customer who is a couple of days from turning in his or her vehicle for inspection, for example, can request that a VPC inspector take a quick look at the vehicle. After the pre-inspection, customers can be given an inspection sheet that lists any failures. That way, George said, when the customer returns, those problems can be already taken care of. The pre-inspection does not eliminate the main inspection at time of turn in.

Due to the peak season, VPC personnel have limited time, so they perform quick looks on a case-by-case basis. The customers at the VPC with vehicles undergoing inspection are given priority.

“During the peak season, we try to do this in between customers,” said George.

“I have seen customers go and get their car detailed, and they come here and they fail because the detailers didn’t know what they were doing,” said George. “It’s still the customer’s responsibility.”

Also, even though the VPC has standard operating procedures, sometimes a contractor may accidentally overlook something.

“That’s human,” George said. “It’s the same thing with the customers: They could spend three or four days cleaning their car and then they come here and they fail. They’re going to be mad, but these guys have been doing this for so long. I can’t hold them up; they have to set a time limit.”

George said this as a contractor helped a customer clean away some dirt from his engine compartment.

“Normally he could have sent him away,” referring to customer undergoing inspection, “but he’s allowing him to clean to get the stuff taken care of.”

Because other customers may be waiting or someone might have an appointment, they can’t always let the customer correct faults on site. They do, however, allow it when possible.

“I understand it’s a PCS,” said George. “The service member and their family are getting stressed and they want to get it over with. And this is the last thing they want to be having to deal with, but if they’re prepared for it, then it will make it easier on them.”

After the agricultural inspection is the damage inspection during which contractors record nontechnical defects such as scratches, dents and rust.

“When it’s delivered to the customer at the final destination, if something is damaged then they can say, ‘Well, this was already annotated. It’s not a new one.'”

George said the damage inspection is meant to protect all parties involved, including the customer. The process is not unique to the contractor or even the military.

“Every company that transports vehicles does a damage inspection,” he said. “It’s to cover the service members, the contractor and the government, so that all sides are covered in case there are any claims.”

MOST COMMON REASONS FOR FAILURE

Before a community member departs Ansbach, the transportation office briefs outgoing personnel about what to expect at the VPC. At the transportation office, vehicle owners are given a pamphlet that tells them what they should do and what they should not do before turning in their car. The pamphlet also lists the Top Five Reasons for Vehicle Failure:

George said every year the VPC gets inspected by their higher authority to include USDA.

“They just got inspected in March and passed with flying colors,” he said. “That shows me that they are doing what they’re supposed to. That means when the customer’s vehicle gets to Bremerhaven from this facility or any other facility, they will have very little issues with customs. They’ll go through the customs clearance area with no issues, get back to the states, and they can get their car faster.”

To learn more about VPC turn-in requirements, visit www.pcsmypov.com/TurnIn and make sure to read beyond the first three steps, where it says “OCONUS to CONUS POV Shipments.”