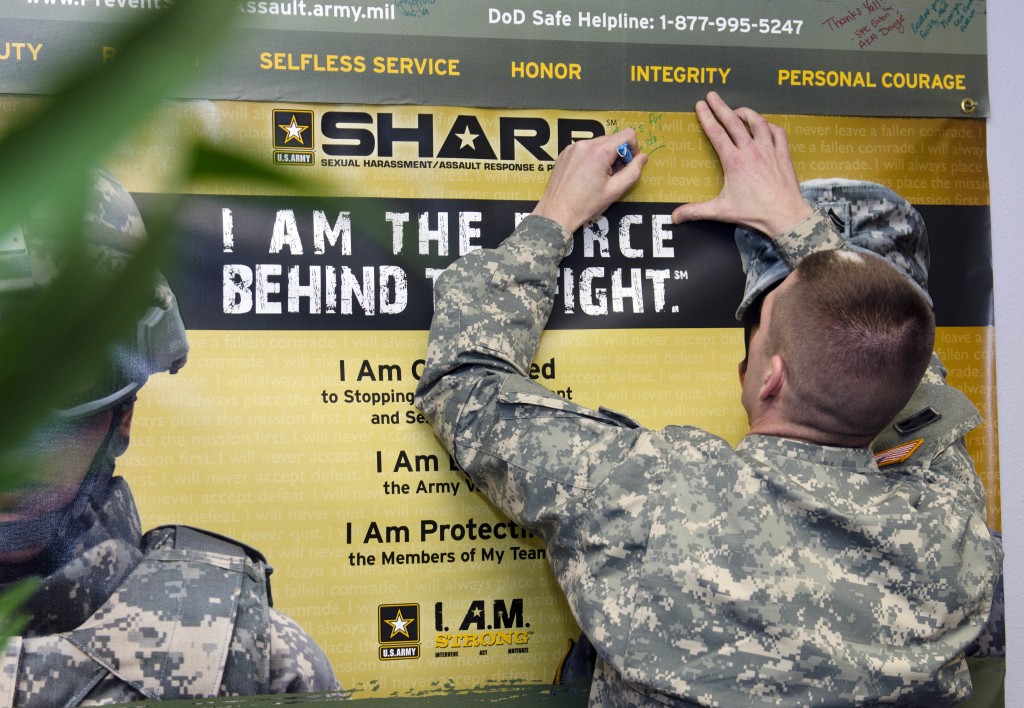 Sgt. Maj. of the Army Daniel Dailey signs the Sexual Harassment/Assault Response and Prevention poster hanging at the SHARP Resource Center during his visit to Joint Base Lewis-McChord, Washington, March 2, 2015. Additionally, Dailey met with Soldiers to talk about the future of the Army and what it takes to have a successful Army career. (U.S. Army photo by Sgt. Ryan Hallock, 19th Public Affairs Detachment)

WASHINGTON (Army News Service, July 30, 2015) — Training and outreach efforts, as well as involvement by leaders at all levels, have contributed to a decrease in incidents of sexual assault and harassment in the Army, in addition to upswing in reporting over the last few years.

That’s a good trend, she said. What’s troubling however is that during that same time period, the statistics for males experiencing unwanted sexual contact increased from 0.8 percent to 1.2 percent.

Noting that while 1.2 percent might seem to be small, the proportion of males to females in the Army overall is much greater. Therefore, the raw number of male sexual assault victims is significantly higher than female victims.

“That shocked a lot of people and got our attention,” she said. “We still have a lot to learn about male victimization” in order to build a more effective preventative and treatment model and training, she said. One thing that the Army knows for a fact, she added, is there’s a “huge” stigma in male reporting.

Ferrell said that understanding the nuances of male victimization and designing a strategy to address this issue is one of her top priorities.

To receive that designator, SARCs and victim advocates must be credentialed by the DOD Sexual Assault Advocate Certification Program and the National Advocate Credentialing Program Committee. They are also required to complete the SHARP certification training course at the new SHARP Academy at Fort Leavenworth, Kansas, which was stood up in October 2014, and will be in full operating capability by Oct. 1, this year.

That type of training used to be administered from Ferrell’s office, but responsibility for developing the programs of instruction and administration of the course now resides with the SHARP Academy, which is nested under the U.S. Training and Doctrine Command’s Combined Arms Center. This transfer of mission allows the SHARP office in the Pentagon to concentrate on program policy, oversight and overall SHARP program management.

SHARP LINE OF EFFORT FOR CIVILIANS

A work that’s still in process, Ferrell said, is developing a line of effort that’s targeted toward Army civilians. This line of effort will include annual SHARP training, policy and outreach.

Army civilian leaders throughout the Army will meet to discuss the content of the civilian line of effort, including details such as whether or not separating training from the uniformed side is desirable.

In fiscal 2014, the RAND Military Workplace Study showed that 52 percent of DOD females who filed an official report of sexual assault reported some form of retaliation, Ferrell said.

Retaliation could range from ostracism to more serious reprisals, she said. The problem is that there are not common definitions across the military services, so the term “retaliation” is not used consistently. That’s important for a programmatic and training aspect and DOD and the services are working collaboratively to correct it and develop a strategy to prevent and address retaliation.

Some Soldiers have reported being sexually harassed or retaliated against by other Soldiers in the form of social media, Ferrell said.

The Army is taking steps to deal with this, she said. This month, for example, the Army published All Army Activities message 122/2015, which deals with online conduct, to include sexual harassment, as well as victim retaliation.

The ALARACT, she said, makes it clear that harassment will not be tolerated and isn’t consistent with Army values and those who participate will be subject to disciplinary action. Studies have shown that sexual harassment often is a precursor to sexual assault, she added.

In fiscal 2014, the Army piloted a SHARP Resource Center concept, modeled after a facility first established at Joint Base Lewis-McChord, Washington, Ferrell said. The center is a one-stop shop where victims can receive help from a range of SHARP providers including advocates, legal and medical.

Since then, a total of 14 centers have opened, the latest in April at Aberdeen Proving Ground, Maryland.

The Army is now developing metrics to capture data from those centers to see if the concept should be extended Army-wide, she said.

Several other initiatives are underway, Ferrell said, including consolidating SHARP policy into one regulation and in more understandable and concise language.

To Ferrell, who has a background as an auditor, this is especially important and said she’s putting her analytical skills to work to make the policy and oversight role of her office more effective.

Getting ideas for program improvement from the lower levels of SHARP at the installations up to the program level at Department of the Army is another goal, she said. SHARP plans to borrow the Army Family Action Plan format for its first annual SHARP Program Improvement Forum, Aug. 6-7. That format involves collecting a range of ideas, sorting through and organizing them, then prioritizing them for action. Then, actions taken for each issue will be made available Army-wide.

Command Climate Surveys are working well, Ferrell said, speaking about a report card Army leaders receive annually as well as within 30 days of taking a command. The surveys indicate how Soldiers feel about their leaders’ commitment to fostering an atmosphere of respect and values, she said, and become part of a leader’s formal evaluation record.

Ferrell noted that leadership takes sexual assault crimes seriously. Army prosecution rates compare favorably with civilian rates. Commanders prosecuted the offense of rape at a rate of 72 percent while prosecution rates for civilian jurisdictions were about 20 percent over the last three years.

Another new initiative that has the potential to make a tremendous difference is the “Not in My Squad” campaign started by Sgt. Maj. of the Army Daniel A. Dailey. That initiative, Farrell said, involves getting first-line supervisors, such as squad leaders, involved with taking ownership of creating an environment of dignity and respect in their units. It means small-unit leaders discussing issues in formal and informal settings.

Not in My Squad opens the lines of communication, she added. Not just for SHARP, but for other issues like suicide, drugs and alcohol.

This year’s DOD Sexual Assault Prevention and Response Office’s theme, said Ferrell, is “Know Your Part, Do Your Part.” That gets to the role everyone has in eradicating sexual harassment and assault. Intervention early on with milder forms of harassment can prevent assault from happening later on.

Each year, the Army brings in about 100,000 new Soldiers, each with his or her own sets of values.

“We try to inculcate them into the Army values and the Army profession early on, even before they go to boot camp,” she said, with recruiters taking the lead on explaining to them what constitutes acceptable behavior.

“Some of those messages take hold with some Soldiers quicker than others. Some just don’t get it, unfortunately,” she said. “So, we continue to see incidents of sexual harassment and assault. But we’ve been working very hard at this. What we do know is that the statistics show we’re making progress and we’re very happy and proud of that. We must sustain this momentum.

“The secretary [of the Army] and chief [of staff of the Army] have said all along that this is the Army’s number-one priority,” she continued. “That’s not just talk. It’s evidence of engaged leadership.”