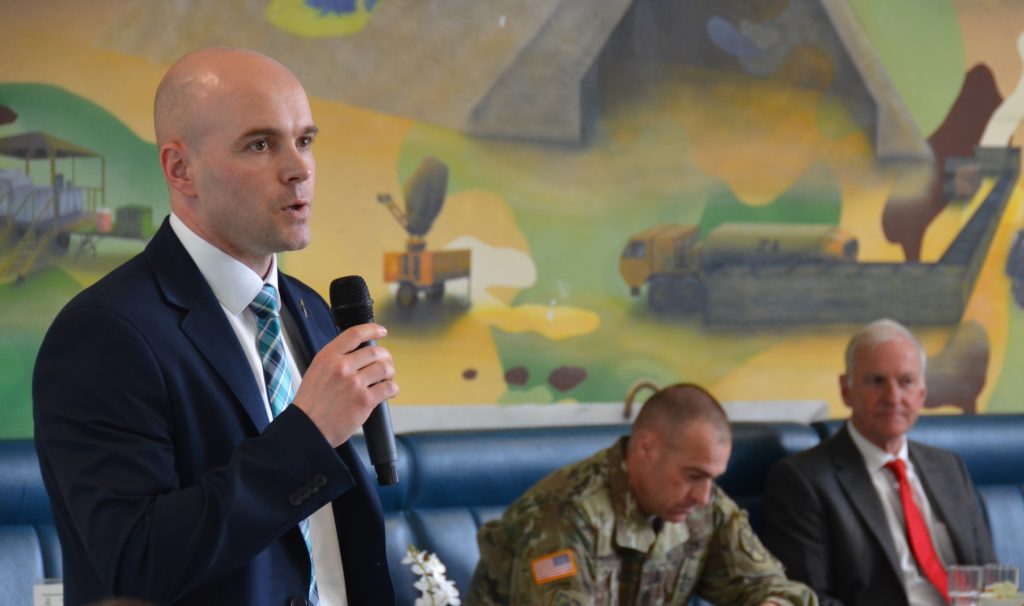 Representatives from the Sexual Harassment / Assault Response and Prevention program and unit victim advocates attended the event and spoke to diners. 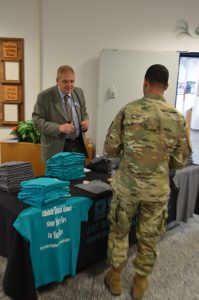 Richard Fry, the sexual assault response coordinator for the garrison, believes it important that victim advocates establish a positive relationship with community members. 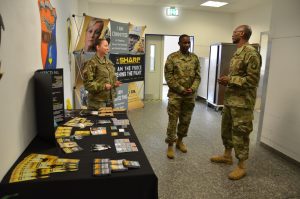 “We’re out here interacting with everybody and bringing awareness,” said Seyfried.

In support of the event and in support of sexual harassment and assault awareness and prevention, James A. Walls, the deputy to the garrison commander, and Command Sgt. Maj. Derek R. Cuvellier, USAG Ansbach command sergeant major, attended the event. Walls took the microphone to speak to the attendees, emphasizing the importance of bystander intervention and action over inaction.

“The bystander piece, I think, is a critical component,” said Walls. “So much can be done when somebody starts to see something going down a path it shouldn’t. That’s when it’s better to intervene and be wrong maybe than to not do something and regret it.” 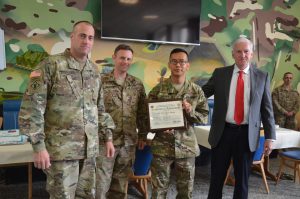 In the lead-up to April as Sexual Assault Awareness and Prevention Month, the garrison SHARP office hosted essay and poetry contests. On-post essayists and poets wrote about the theme for the awareness month: “Eliminate Sexual Assault. Know your Part. Do your Part.”

Spc. Ngawang L. Sherpa, who works with the Katterbach Army Health Clinic, was the essay winner and was on hand during the event to receive a plaque recognizing his achievement.

Sherpa’s essay, like Walls’ speech, was about bystander intervention in addition to awareness of the issue. Sherpa said his motivation was protecting the Soldiers in his unit.

“I do not want anybody in my unit or anywhere in my surrounding [to endure] any kind of sexual assault issues,” said Sherpa. “It’s a very big deal, and it can haunt someone for the rest of their life.”

“Watch out for each other,” said Sherpa. “If anybody is going through any kind of depression or SHARP-related issue, always bring it forward.”

April as Sexual Assault Awareness and Prevention Month continues with a SHARP and Better Opportunities for Single Soldiers Teal Barbecue Saturday, April 23 from 3 to 6 p.m. at the Von Steuben Community Center for single Soldiers.

The garrison is also set to observe Denim Day April 29. Members of the community are encouraged to wear denim to raise awareness of the harmful effect rape and sexual assault myths have. To learn more about this event, visit “USAG Ansbach Denim Day flier” at the garrison’s Flickr site here.

To read this story as it appears through the Army News Service, visit www.army.mil/article/166177.