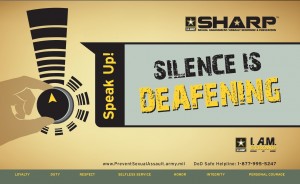 ANSBACH, Germany (Dec. 1, 2015) – The Army’s Sexual Harassment/Assault Response and Prevention, or SHARP, program was created for Soldiers, Family members and Department of the Army civilians to provide a focused and concerted effort that includes prevention, training and education, victim advocacy, response, reporting and accountability.

The Garrison SHARP offices are currently located in rooms 213 and 221 in the garrison headquarters building at Barton Barracks.

“We work hand in hand with the 12th CAB SHARP team trying to make sure that all members of the USAG Ansbach community are taken care of in the event of sexual harassment or sexual assault,” said Fry.

“While I believe the culture of our Army has been based on standards and discipline since 1775, I also believe our culture is challenged with every SHARP event,” said Kiefer. “The effort we place into combating SHARP issues must permeate into all levels of an organization to have the desired effect that causes change.”

Fry joined the Garrison SHARP program as SARC in November 2014 after a 20-year career in the Army. Formerly a first sergeant with the 18th Engineer Brigade, Fry was honored as the USAREUR and Department of the Army SARC of the Year in spring of 2014.

Assisting Mr. Fry with the Garrison SHARP program is Vernon Chandler, who serves as the Garrison’s victim advocate. Chandler, a retired Army chaplain, was the SARC in USAG Darmstadt from 2005 to 2008. Chandler interacts with the victim on a one-to-one basis. He provides a more direct service to the victims of sexual harassment and assault that find their way to the garrison SHARP offices.

“I am here to advocate for an individual who may be experiencing sexual harassment or sexual assault and assist them with whatever they need,” said Chandler. “I walk them through the system. I’m here to provide services such as helping them seek medical care or providing emotional support throughout the entire process, as well as directing them to available legal and counseling services depending upon their needs.”

Fry and Chandler are using their combined experience and knowledge to make the Garrison SHARP program successful. One of the most significant ways they do this is by reassuring the public that they are there for them.

Kiefer believes in the importance of the SHARP program.

“Every Soldier, civilian, and Family member has a stake in the future of the Army as an institution to make sexual harassment and sexual assault a thing of the past,” he said. “My personal desire is to leave this Army someday better than I found it nearly 30 years ago.”

To read this story as it appears on the Army News Service, visit www.army.mil/article/159293.

For more on SHARP at USAG Ansbach, visit www.ansbach.army.mil/DirectoryS.html#SHARP.