ANSBACH, Germany (Sept. 8, 2015) — Members of U.S. Army Garrison Ansbach’s Religious Support Office and the Katterbach Protestant Congregation ventured out to the Franconian city of Schwabach to visit its museum Aug. 27.

The group focused on several exhibits at Stadtmuseum Schwabach, including an adjoining World War II-era U.S. Army barracks building — part of O’Brien Barracks, which closed in 1992 — the Goldschläger (goldbeater) exhibit and a decorative egg collection that includes a Fabergé egg.

Schwabach has a history of “goldbeating,” a practice of hammering gold into thin sheets for purposes such as art and architecture. The first known craftsmen in the region were monks, and the first recorded goldbeater on record in nearby Nürnberg was in 1373. 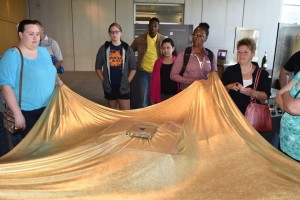 ANSBACH, Germany (Sept. 8, 2015) — Katterbach Protestant congregants enjoy a display highlighting that 2 ounces of gold can be flattened to an equivalent of 4 square meters, during their Aug. 27 visit to the Schwabach City Museum. (U.S. Army photo courtesy of the USAG Ansbach Religious Support Office) 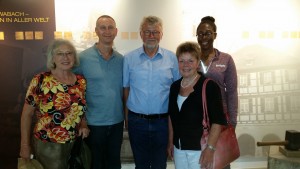