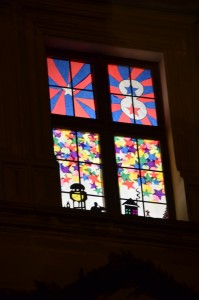 Students of Ansbach Elementary School at U.S. Army Garrison Ansbach helped design and create the eighth window of the Rothenburg ob der Tauber Rathaus advent calendar, which was lit Dec. 8 during a ceremony involving a choir of the school’s students.

Students from Ansbach Elementary School at U.S. Army Garrison Ansbach helped design and helped commemorate the lighting of the eighth window in the town of Rothenburg’s city hall, or Rathaus, which during the month of December serves as a building-size advent calendar.

In a Christmas custom, advent calendars count the days from Dec. 1 to Dec. 24 in anticipation of Christmas Day. For each day, children open one door or flap of the advent calendar, which is usually small enough to hang on a door, to reveal a picture, a Bible verse, a poem, a small toy or a piece of candy. In the Rothenburg town square, the town decorates the windows of their Rathaus, revealing the decorations of a new window with each day.

The students of Ansbach Elementary School helped design the eighth window, which had the theme “Christmas in our Hometown.”

“We are grateful that your city and our garrison have continued this excellent tradition,” said Col. Christopher M. Benson, USAG Ansbach commander, during the event. “Thank you for welcoming us here.”

The window has four panels, one with the numeral 8 to represent the day of the month, and in the bottom two panels are silhouettes of different buildings and a Soldier.

“The kids have made all this stuff,” said Tena Nalker, the art teacher.

The children took turns coming down to the library to cut out the silhouettes and to cut out stars and other shapes from lantern paper.

“Our window represents both our hometown in the USA and here in Germany,” said Ida De Haan-Weissman, who helped organize the event. “Many symbols and songs have come to the USA from the people who have traveled from Europe to other continents. They brought with them many cultural traditions, some of which we still share to this day.” 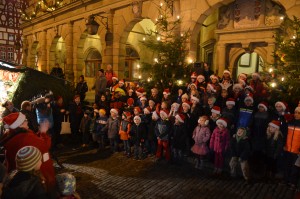 “For any of these students, when they’re here in Germany, it’s a very unique opportunity for them to participate in host nation activity,” said Heather Bolwar, the music teacher. “Their peers in the same grade level back in the U.S. don’t get the same opportunity.”

Bolwar conducted the children at the event, whose repertoire included the 1945 classic “Merry Christmas to You” and the more modern “Blitzen’s Boogie.”

Walter Hartl, the Oberbürgermeister of Rothenburg, toward the conclusion of the event, requested the children sing the Christmas sing-along medley again, which the children did.

“Germans see that the Americans are not just Soldiers who are stationed here,” said Thomas Schlötterlein, who translated the text so the students could introduce the songs in both English and German. “There are Families involved here too. They have children. It’s not just uniforms.”

Delaney Martin, fourth grade student at Ansbach Elementary School, helped design the window, sang, and provided one of the introductions at the event. She had been to the Rothenburg Christmas market before, and before the event looked forward to visiting again.

To read the story as it appears on the Army News Service, visit www.army.mil/article/159722.