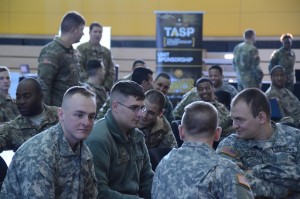 Soldiers gather and take seats before the event.

ANSBACH, Germany (March 10, 2016) – It is a Soldier, a Family member, or a civilian that boards a plane in Maryland, flies out in the evening and descends into the clouds to land at Ramstein Air Base, Germany, in the morning following an abbreviated night.

This could be the first time they have moved to another country on another continent, and the newcomer derives their first impression of a strange new post in a foreign land from their sponsor.

Different subject matter experts – representing services as diverse as Ramstein Gateway Reception, Army Community Service, Housing, and Tricare – performed briefings on their subjects to the sponsors at stations. The stations were arranged throughout the main hall of the fitness center in a horseshoe pattern, and the groups of sponsors moved from station to station following each briefing. 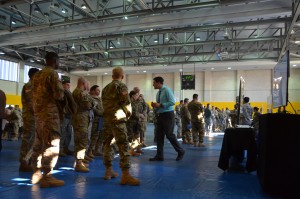 Greg Bleiler, who works with the Directorate of Human Resources, speaks to Soldiers about sponsorship as it relates to the garrison at Ansbach.

Installation Management Command – Europe created the rodeo for the purpose of providing unit leadership with the tools and knowledge to establish and maintain an effective sponsorship program within their organizations, according to Damon Wilford, director of Human Resources at USAG Ansbach.

“It sets the tone for your entire tour,” said Wilford of the arrival and onboarding of new community members. “If you’ve got a good sponsor – and that’s what we hope to create here – it makes that whole experience better.”

Command Sgt. Maj. Derek Cuvellier, USAG Ansbach command sergeant major, attended the event. Although he sees the program as important for the Army as a whole, it is particularly crucial for overseas tours.

“The transition is so tough, especially to bring a Family over here,” said Cuvellier. “Sponsorship is only as good as the sponsor – how much they care and how much they know. That’s why these events are important, to arm our sponsors with the right information to take care of Soldiers and their Families in the garrison.”

One of the briefers, Michele Begosh, the U.S. Army Europe program manager for sponsorship, felt the event was directly relevant to the well-being of the community. 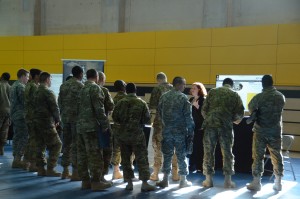 “Sponsorship is important because it relates to the overall readiness of the community,” said Begosh. “We want to make sure that the Soldiers who are coming in with their Families are prepared when they get here because we are in a very fast-paced world. If the Soldiers are taken care of before they get here – they get welcomed in the community with open arms – they can focus on doing their jobs because they know their Family is already settled.”

Part of getting Soldiers and their Families settled includes getting a wide range of Soldiers versed in the ins and outs of sponsorship.

“What we try to do here is to bring in some of the junior Soldiers so that they can get the similar information,” said Wilford, “so they would be better equipped to sponsor Soldiers and their Family members, to make the onboarding and integration process a lot smoother.”

Cpl. Chisolm Trammel and Sgt. Jeremiah Gieseman attended the event. Gieseman had previously served as a sponsor, and Trammel had yet to serve as a sponsor.

“Pets never would have crossed my mind,” said Trammel of what he learned at the rodeo.

Trammel also learned that much of what was previously done through paperwork and wait times was now achieved more quickly electronically.

Civilians also attended the event to learn to be better sponsors. Erin Connolly, chief of Internal Review at USAG Ansbach, has both served as a sponsor and been sponsored. As a recent sponsor, she wanted to identify and resolve any gaps in her knowledge in case she has the opportunity to sponsor again. 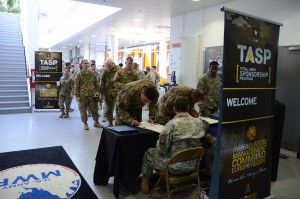 Soldiers sign up as they arrive to the rodeo.

The rodeo, which has been performed at other garrisons throughout IMCOM-E, has a set list of what organizations must brief the sponsors. In the USAG Ansbach TASP rodeo, several services that are not represented by the sponsorship rodeo model find representation here, said Wilford. One of those is the Veterinary Clinic.

At the event, Wilford spoke about both the purpose of the rodeo, which lines up with the goals of Installation Management Command.

“It’s all about taking care of Soldiers and their Families,” said Wilford. “That’s why we’re here.”

To read the story as it appears on the Army News Service, visit www.army.mil/article/163933.