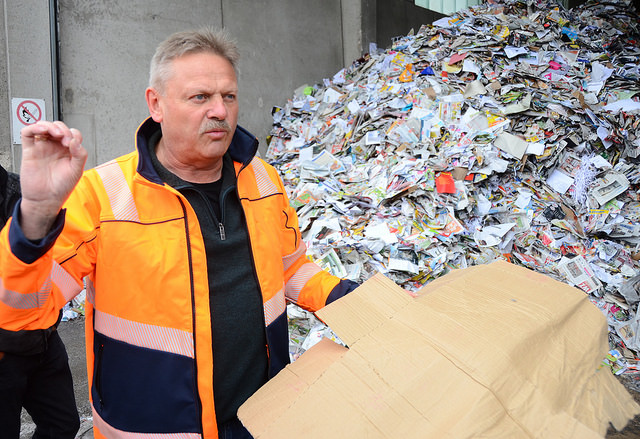 MARKT BEROLZHEIM, Germany (May 18, 2017) – More than 20 members of the U.S. Army Garrison Ansbach community used their Friday morning training time to take a group tour of the Rudolf Ernst recycling and sorting facility near the town of Gunzenhausen April 28.

The USAG Ansbach Directorate of Public Works’ Operations and Maintenance Division coordinated the visit to give attendees a first-hand look at how the sorting and recycling process works in Germany.

The Markt Berolzheim facility processes recyclable waste from Ansbach and several of its adjoining communities including the county areas of Weissenburg, Donau-Ries, Eichstaett, various parts of Nürnberg and from USAG Ansbach itself. This “waste stream” amounts to 50,000 tons of material per year that the plant collects, processes, breaks down, recycles and sells back to companies that remanufacture it into new products. Some of the material is also processed for further recycling through other companies.

Although German law requires residents to sort their waste before it’s picked up, waste management agencies like Ernst continue this process on site. This work includes filtering out contaminants, consolidating and compressing stacks of paper and metal, and removing labels from bottles.

According to Jutta Seefried, environmental protection assistant for USAG Ansbach DPW’s Operations and Maintenance Division, properly separating trash is not only good for the environment, but it saves the Army money. The more community members can properly separate their trash before Ernst collects it, the less the government needs to pay for their time and manpower.

Ernst facility supervisor Manfred Ortner served as tour guide while on site. Ortner led the group around the facility’s warehouses and backlots, each filled with different materials and colors. These included house-sized piles of glass bottles separated by color, stacked cubes of crushed metal, and bales of cardboard and paper.

Along the way, Ortner stopped and provided the how and why of each section – how Ernst separates paper from cardboard, for example, or why Ernst employees are so vigilant about minimizing contaminants that degrade the purity of their recycled materials.

“Do you see this?” he raised a brown ceramic bottle above a pile of brown glass bottles. “This is a big problem.” While ceramic isn’t inherently bad, it’s not supposed to be recycled with glass; but instead with construction debris.

These so-called contaminants, though acceptable to a certain threshold, degrade the quality of the recycled material that Ernst pushes back out onto the market, he said. Though some contamination is acceptable, the goal is to keep it below 2 percent.

Seefried said it’s important to recycle glass because doing so saves 25 to 30 percent of the energy used to reproduce it new – but more importantly because it “never wears out and can be recycled forever.”

According to a 2016 report from the Organization for Economic Cooperation and Development, Germany leads the world in recycling by percentage of material. The organization rates the U.S. as slightly above average. This might be why Germany’s recycling habits can overwhelm Americans new to Germany.

To Staff Sgt. Olena Szaro, a paralegal noncommissioned officer with Headquarters and Headquarters Company, 12th Combat Aviation Brigade, the key in adjusting is creating habits. Szaro was at the sorting facility with her colleagues from the Ansbach Law Center.

Though she is in the U.S. Army, Szaro has an advantage over most Soldiers in that she hails from Ukraine, which has recycling standards that more closely mirror Germany’s.

Szaro said it may be more of adjustment for others, however, and suggests offering a mandatory class for incoming Americans during the in-processing phase, or at least something more engaging than handouts. If she had her way, all incoming personnel would be able to take a trip to the recycling center.

Keep an eye out for future environmental trips by bookmarking the Environmental News section of The Ansbach Hometown Herald at https://ansbachhometownherald.com/category/environmental-news. To see this story on Army.mil, visit www.army.mil/article/187959. To learn more about recycling in Germany, visit www.ansbach.army.mil/Recycling.html. 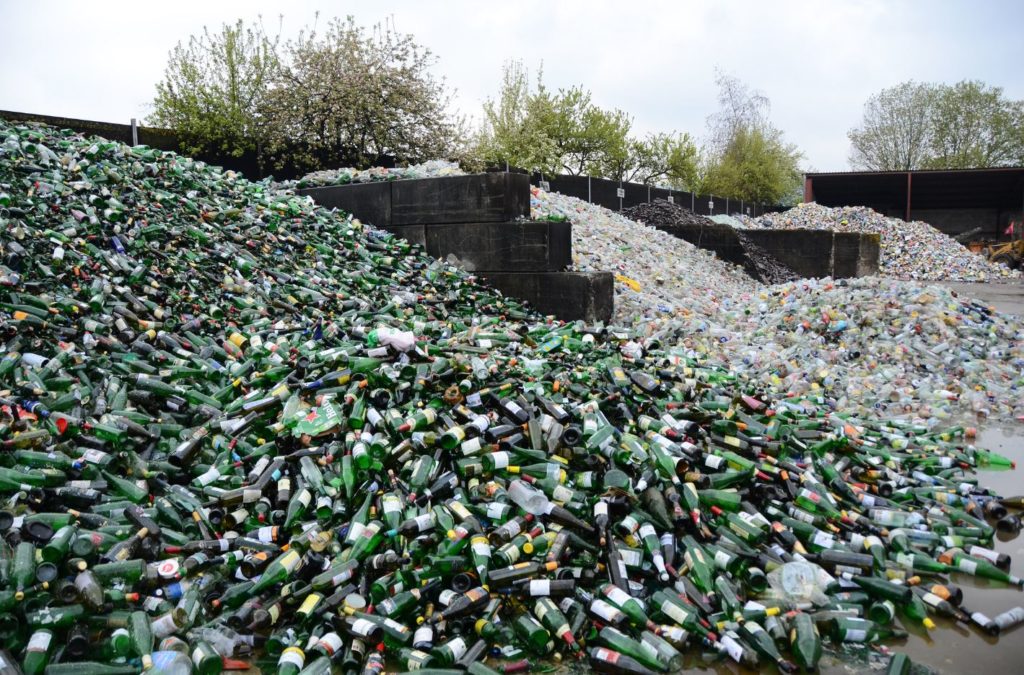 Pictured are piles of thousands of glass bottles ready for further separation at a waste sorting and recycling facility in Markt Berolzheim, Germany. Community members from USAG Ansbach visited the facility as part of an environmental field trip April 28, 2017.