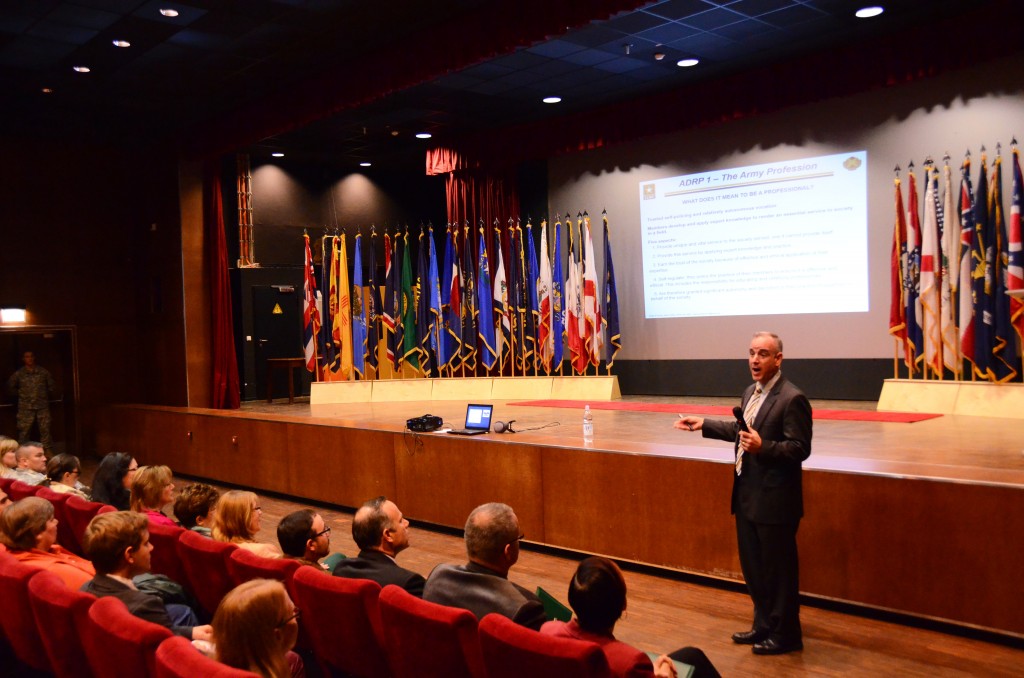 Formica focused his remarks on what it means to be an Army professional, and how the members of USAG Ansbach’s Department of the Army civilians and local nationals have lived up and continue to live up to the set of values and beliefs that define professionalism.

“I want to applaud this great community — this community of Ansbach,” said Formica, who assumed his role as region director in November. “What you have done for our Army over the last three years has been nothing short of remarkable. And that’s what I know. I’m sure there were as good or greater accomplishments that preceded that, but what I have seen and what I understand has occurred from this great team has been phenomenal.”

While acknowledging the difficulty in closing installations, Formica highlighted the quality and speed of the closures of USAGs Bamberg and Schweinfurt as one example.

“It is never easy to have to close, and it is always difficult when it is something you have been so committed to for, often, most of your lives to run those installations,” he said, mentioning that many members of Team Ansbach have served at those now-closed garrisons. “But you as professionals did that, and you did it exceptionally well.”

Formica also talked about the European Infrastructure Consolidation and the Aviation Restructuring Initiative, which were announced early this year. Formica praised USAG Ansbach’s civilian team members in their mission of supporting 12th Combat Aviation Brigade’s transition, including the movements of its Soldiers and Family members.

“You all supported that great outfit in its transition, its PCS moves, the movements of those Families, the transition of Illesheim and Storck down to here that continues to go on, but you all did that,” he said. “You didn’t break a step. You continued to march in supporting that critical activity.”

In the midst of the EIC, he said, the Army placed USAG Ansbach in a new role to support a rotational aviation force that Formica said stands to be the aviation combat power that supports military efforts in Eastern Europe.

Due to this capability, Formica repeated a term coined by USAG Ansbach’s deputy garrison commander, James A. Walls, calling Ansbach the “Gateway to the East.”

“And once again this community rose to the challenge,” he said.

And now the Army is giving USAG Ansbach a new challenge to tackle — managing Mihail Kogalniceanu, or MK, Air Base in Romania and Novo Selo Training Area in Bulgaria.

“Those are two bases that we have out in those countries right now that are critical to operations in support of [U.S. Army Europe] and NATO,” said Formica. “They require IMCOM management and leadership, and I think Ansbach is the exactly right organization to do it. I think that we can do that by leveraging the skills that you have here now to support out east.”

“It is all about the great Army professionals that you are to make that happen,” said Formica, who then transitioned to the focus of the town hall: the Army Profession.

Formica said it became particularly apparent in 2010 to senior Army leaders like Gen. Martin Dempsey, chairman of the Joint Chiefs of Staff, that after more than 10 years at war, the Army needed what Formica calls a touchstone to return to that “affirms and reinforces the Army professional ethic that all Army professionals need to abide by, so that as we go forward after 10 hard years of war that we are valuing the Army values and that we are building a climate and culture inside of the Army that sustains us over the next decades.”

He said it then became obvious that adhering to the Army professional ethic was not only important for Soldiers, but for Army civilians and local nationals as well.

“From that point forward, the tent, if you will, of the Army profession was expanded — and rightfully so, because while the armed forces’ uniformed force is about a million when you count the active component and the reserve component, there’s another 700,000 who serve in the uniform that you’re wearing and that I’m wearing today, to support those Soldiers,” said Formica.

“So I’m offering to you today an understanding of what it means to be a member of the profession, and then the ethic that I’m going to ask you to live by as a member of this profession.”

“We are a critical component,” he said of Army civilians’ role in the Army Profession.

“You may think that you hold a job, but I am offering to you, and I’m asking you to accept, that frankly you’re doing something to a higher calling for a bigger reason than just a job — and that is a profession,” he added.

The Army has defined the Army Profession as “a unique vocation of experts certified in the design, generation, support, and ethical application of land power, serving under civilian authority and entrusted to defend the Constitution and the rights and interests of the American people.”

USAG Ansbach, he said, focuses on two of those components: generation and support of combat power.

“We generate combat power here,” said Formica. “We sustain combat power through every activity — whether it’s providing housing and the utilities and the maintenance to support the housing, to FMWR providing for a ready and resilient community for Soldiers and family members.

“So when a private, lieutenant, warrant officer or a captain has to go out east to support an operation, he or she feels confident that their family has been taken care of, and he or she is of the right mindset, is spiritually and physically capable to go perform that function,” Formica added. “That is a direct reflection on what you as a garrison do. That is support. That is building combat power.”

Formica expanded on what it means to be an Army professional and the core parts of the Army ethic, and thereafter opened the floor to a question-and-answer session for attendees.

Before his departure, Formica shared another final thought how being an Army professional applies to USAG Ansbach and other Army organizations throughout Europe: “I’d ask you to think a little bit differently about what you do every day and why you do it. It isn’t about a bottom line. It is about ensuring that we have an alliance that is fully capable of assuring our allies and deterring our adversaries.”