The event was organized by USAG Ansbach’s Family and Morale, Welfare and Recreation, specifically their Sports and fitness Branch, for two purposes. 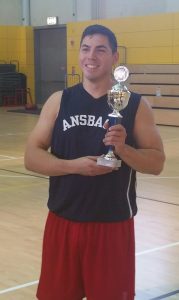 Sgt. Paul Islas of the Renegades won MVP during the tournament.

The Renegades of E Company, 1st Battalion (Attack Reconnaissance), 3rd Aviation Regiment, placed first overall with “The Apocalypse,” the 3-501st team from Storck Barracks, running up. Sgt. Paul Islas of the Renegades won the title of most valuable player.

The event served as an assessment practicum for the officials that attended the basketball clinic Oct. 24 through 27. As a side note, that clinic had record attendance for the garrison.

The second purpose of the clinic was to serve as a preview of the upcoming unit basketball season, which kicks off Nov. 8. Sports and Fitness is still seeking teams to sign up for the event, and wishes to get the word out on the basketball program.