Premiere: USAG Ansbach participates in job fair “All paths to your new career” 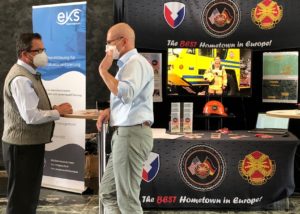 The U.S. Army in Germany has employed tens of thousands of local nationals over the last 76 years, at times across generations of employees from one family. The closure of many U.S. Army installations in Germany since the end of the Cold War resulted in reduction and consolidation of the local national (LN) workforce at the remaining U.S. Army garrisons in Germany. Uwe Wagner, USAG Ansbach workforce development specialist states: “The German labor market has undergone a fundamental change. Where Department of Army Selecting Officials used to be able to select good candidates from a large pool of qualified applicants, the job market has shifted, and is now more in favor of the employee. Phenomena such as demographic changes and the shortage of skilled candidates present Army leadership with the challenge of attracting and competing for the best talent.”

The U.S. Army in Europe’s lagging recruiting efforts combined with its aging LN workforce calls for immediate measures to recruit new and younger employees. Thus far, the Army has relied on the Civilian Human Resources Agency – Europe (CHRA-E) to advertise open positions on its website, counting on potential candidates to actively seek out, find and apply for these open jobs. With the help of the LN workforce, who often relayed the information about open jobs within their social network, the Army has – until now – been able to refill their ranks. But that is no longer the case.

Uwe Wagner, USAG Ansbach workforce development specialist said, “CHRA-E will have to come up with a modern, internet-based, customer-friendly application platform which is easy to access and highly visible to the public. The U.S. Army is a desirable employer. In order to attract new employees, it has to better advertise its qualities and benefits.”

Instead of waiting on the slow wheel of progress at higher levels, and because vacancies are hard to fill in the  local national workforce, USAG Ansbach took action and found a way to participate in the Jobmesse Nürnberg. This professional job fair, largely advertised and attended throughout the region attracts job seekers and graduating students looking for employment in a variety of career fields from clerical, accounting, and engineering staff to tradesmen such as carpenters or heating technicians as well as firemen.

Garrison representatives packed up flyers and banners together with the obligatory “fair swag” of hard candy and stickers, and headed to the Nürnberg Meistersingerhalle. A recruitment video was produced with the assistance of the Army’s Visual Information Services Europe (VISE), featuring USAG Ansbach’s own LNs. It ran throughout the duration of the job fair on a large TV screen.

Despite of some COVID-19 related restrictions that are still in place, almost 50 exhibitors participated. There were well-known companies as well as small and medium-sized companies and secondary educational institutes, who highlighted their benefits and advantages of working for them. 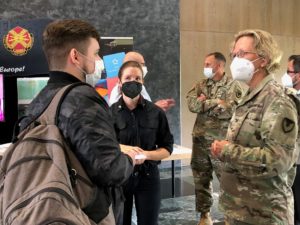 Lea, Kathrin and Emily attended with their schoolmates from the Adam-Kraft Gymnasium in Schwabach. When asked, Lea said, “This is a very interesting booth, because I didn’t even know that the U.S. Army has jobs for Germans. I know that there are Americans in Ansbach, but I never knew that I could look for a job there.” Emily added, “I think it could be very cool to work for the U.S. Army. I am very interested in foreign languages, so talking English every day sounds great.“

Herr Schmitt, a Nürnberg teacher who attended with his graduating class, went through the list of open positions on the CHRA-E website on a laptop brought along to show the job opportunities in real time. He then quickly ran off to find one of his students. “I have a student in my class who is bilingual. He is looking for a craftsman job like the one offered on the website, and speaking English will probably be a big advantage. And the benefits offered are super.”

The booth was equipped with a laptop connected to the internet, and from Wagner’s perspective proved to be very helpful to show the actual CHRA-E website and explain how to navigate through the application process.

Three head-hunting agencies expressed interest in establishing a cooperation. The garrison agreed to provide regular vacancy lists to them, and the head-hunting agencies will submit resumes of potential candidates. Initially, three job seekers are applying for positions at USAG Ansbach following this job fair. Many more took flyers and informational material home to their family and friends.

“USAG Ansbach’s intent of participating in the job fair are twofold,” said Deputy Garrison Commander, Sean Lehane. “First of all, we have to increase our recruiting efforts in order to fill open positions as employees are retiring. Secondly, it is important to show that USAG Ansbach is a vital part of the community and a significant employer and economic factor of Ansbach. He goes on to say: “The attention the USAG Ansbach booth has raised during this job fair, and the number of contacts made there, indicate that the host nation public is very interested in learning more about employment opportunities of the U.S. Army in Germany, and also the mission and purpose of the U.S. Army in Germany in general.”

Due to COVID-19 restrictions, the event was limited to 999 persons present at any time per hour. The event organizer estimated the overall attendance at 6,000 visitors throughout the six-hour duration of the job fair.