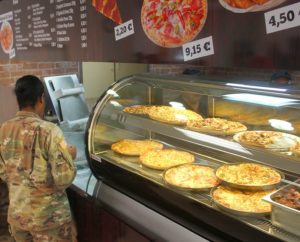 ANSBACH, Germany (March 22, 2021) – The 7th Army Training Command (7th ATC) announced a pilot program for off-post uniform wear at the end of January 2021. The trial phase will run for 180 days, starting Feb. 15, in all U.S. Army installations in the state of Bavaria.

During that time frame military personnel permanently stationed in or visiting the State of Bavaria will be allowed to wear identified duty uniforms during local travel and short, secondary stops at specified businesses and services while traveling to and from the installation at certain times of the duty day.

This policy is not in place across Germany nor Europe, nor will it apply to Regionally Aligned Troops temporarily located in the Bavarian footprint while supporting Atlantic Resolve.

This initiative has been a discussion between 7ATC, U.S. Army Garrisons in the region and local leaders for several years.

“We are proud to call these neighborhoods our temporary home away from home and to be a part of the Bavarian community,” said Brig. Gen. Christopher Norrie, 7ATC commander. “We have built strong and enduring relationships in the communities surrounding the installations, who have welcomed our Soldiers and families for
decades.”

The 180-day pilot program will be evaluated and analyzed for possible extension in the areas surrounding the U.S. Army installations in Bavaria, as well as for potential applicability at other U.S. Army Europe and Africa locations. The short-term policy change also allows time for the local community to adjust and acclimate to the change,
as well as provide feedback to elected officials and military leaders.

Military personnel are expected to conduct themselves with professionalism and courtesy in accordance with Army values and standards at all times. In addition to the Uniform Code of Military Justice and Status of Forces Agreement regulations, the U.S. Army community in Bavaria is subject to German and Bavarian laws, ordinances and restrictions.

Uniforms will be worn in accordance with Army regulations, and are not authorized while consuming alcohol or in establishments such as bars or nightclubs whose main focus is serving alcohol.

Should Bavaria and Germany begin loosening COVID-19 mitigation measures during this trial period, Soldiers would be allowed to eat lunch in off-post locations surrounding the U.S. Army installations, as well as make quick convenience stops at any business or service open in compliance with current restrictions, such as to pick up food and groceries, or get gas.

“Our Soldiers are ambassadors of the U.S. and the U.S. Army at all times, and I expect them to welcome this change while remaining disciplined in adhering to its restrictions,” Norrie said. “We will continue to be good neighbors in the community both in and out of uniform.”