One on one with actor Bryan Cranston 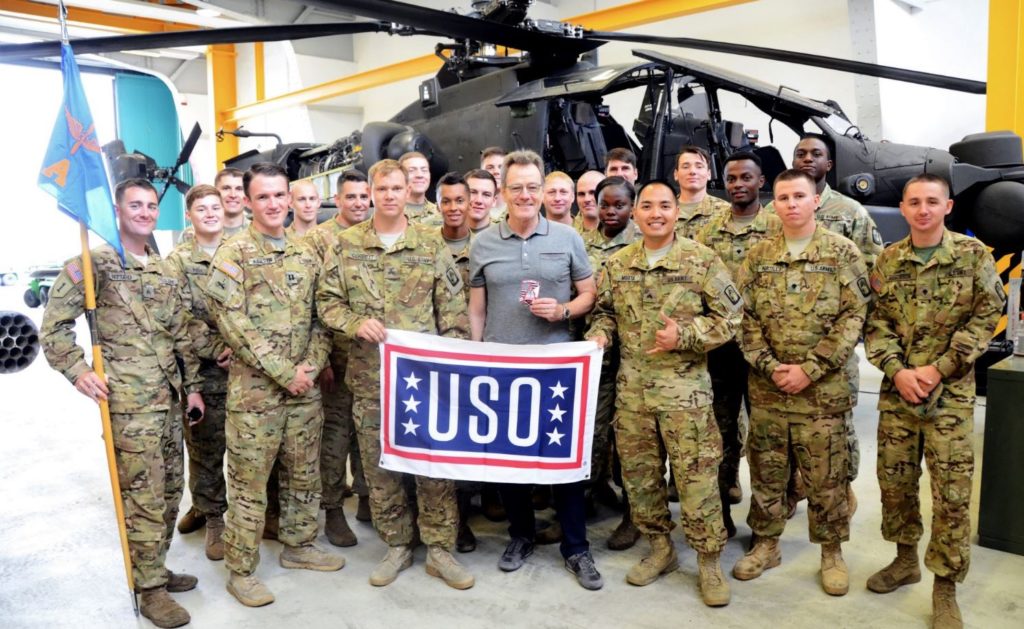 During his July 24 visit to U.S. Army Garrison Ansbach, actor/director/producer/screenwriter Bryan Cranston stopped by the Terrace Playhouse at Bleidorn Kaserne to speak with theater volunteers and members of the garrison’s book club about what he’s learned from his nearly 40 years of experience on stage and screen. Before his Q-and-A session, he took some time to answer questions for the Ansbach Hometown Herald.

WARNING: The fourth question in this interview includes a spoiler for the series Breaking Bad.

What made you decide to come here and visit the Soldiers and families of Ansbach?

I really wanted to do this, and I’ve wanted to do it for a long time. I think if you’re fortunate enough to have a busy career, you can sometimes find yourself being insulated from the outside world – from people who live in different parts of the world and have different occupations. If you went from playing a character from one movie to another to a TV series to a stage play, as enjoyable as that may be – and it is, I love it – it also is a way of keeping you inside a bubble. From time to time, I realize I get a little antsy, and I want to get out, I want to shake hands with people, I want to meet people I would not ordinarily meet in my everyday life – and that’s why. And then the factor of meeting military personnel that are doing heroic things, and I’m truly grateful for their service.

Any good, memorable experiences so far?

Really great, from all the enlisted to officers to the commander. The morale seems to be really good. Now, they may be telling me a different story, but honestly, my wife and I had lunch with three female specialists. I asked them, specifically, “What’s it like for a woman in a traditionally male-dominated environment? How does that make you feel?” And all three said there’s some tough times to it, but they’re managing, and they feel at times that they have to be stronger to prove themselves, but they’re grateful for the opportunity. They’re learning a lot. They’re developing a sense of independence and confidence, which is huge. They have the security of the job, knowing that they have that – health care, a future – so, they were, by and large, very positive about the whole situation.

Have you met anyone yet who’s expressed an interest in acting, and if so, do you have any advice?

There was one. I think he was a sergeant. He said he was done with four or five years, I think, and he was about finishing, and he was going to go back to Texas to get his bachelor’s and study acting. He asked me, “Do you have any advice?” I said, “You really only should try to become a professional actor, writer, director if you love it – if you have a burning desire.” The people who do theater are no different than me. So, what I try to tell people who are enthusiasts of the profession of acting is different from the desire to act. They’re both acting. We approach it the same way. We get the same thrill, the same nerves and excitement of being on stage. So, I make sure that when I talk to people who want to become professional actors, that they have that burning desire. If they can be happy doing something else, they should do that something else because there’s never going to be a shortage of people in my profession.

[WARNING: BREAKING BAD SPOILER] Why are people mad at you for killing Mike?

I don’t know. He was a jerk. I don’t know. I can understand because – the answer to that is partly because Jonathan Banks is such a terrific actor that he enables an audience to sympathize with him, even though he was a hitman. I keep telling people, jokingly, “What do you care about him? He was a hitman.”

I overheard that you had been here before. Is that something you’d like to talk about?

Yeah. When I was 16 years old, I was a member of the LAPD Police Explorers. I was in the West Valley division of the LAPD. Sixteen years old, you have to go through the LAPD academy for eight straight Saturdays and study police procedures, crowd control, investigative things and things like that. I was destined to become a police officer, and I’m with 20 other friends – 16- and 17-year-olds – with five police officer chaperones, and we’re out and on our own, and we came to Ansbach. We were guests of the Army base. We were visiting not only the bases, but also the locales and Interpol, and we were guests of various police departments around Germany and Austria and Switzerland and France and Belgium and Holland. So, it was great. It was five weeks when I was 16 years old. What I remember most about it is that, at the time when I was 16, in 1972, beer was the equivalent of a nickel. … You could buy a tall beer – it blew our minds. And, plus, the fact that we were all 16 years old – way under the drinking age [in the U.S.] – but we never, ever got carded. ‘Come in, boys. Sit down,’ you know? It just made you feel like an adult. It was really fun.

[Just then, an emergency vehicle siren can be heard outside while Cranston is talking.]

And that sound is very specific to Germany, really.

Thank you for your time. Do you have anything to add?

It’s been great, and I have a movie coming out called Last Flag Flying. It was written originally as a sequel to The Last Detail. … It was a Jack Nicholson movie back in the ’70s. They kind of reimagined it. Myself, Steve Carell and Laurence Fishburne are three friends who used to be in the Marines 30 years ago, and now it’s 30 years later and all different forms of decay. It’s going to be very good. I’m looking forward to that. That comes out in November. Last Flag Flying.

To read our story on Bryan Cranston’s visit to Ansbach, click HERE. To see that story as it appears on Army.mil, click HERE.