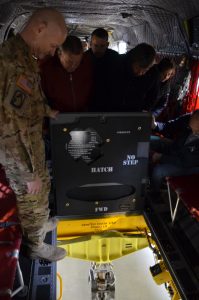 Bianca Sowders, a member of the USAG Ansbach Public Affairs Office, conducted the tour for the German members of the club who would not customarily see the post.

During the tour, the bus stopped at one of the Katterbach Airfield hangars. While there, Soldiers of the 12th Combat Aviation Brigade conducted a tour of a CH-47 Chinook helicopter and an AH-64 Apache helicopter.

The group also visited Army Lodging Brainard Hall, the Commissary, and the Post Exchange before eating lunch at the food court at Urlas Community.

To learn more about Outreach-KONTAKT Franken, including upcoming events, visit their Facebook page at www.facebook.com/OutreachKONTAKTFranken.