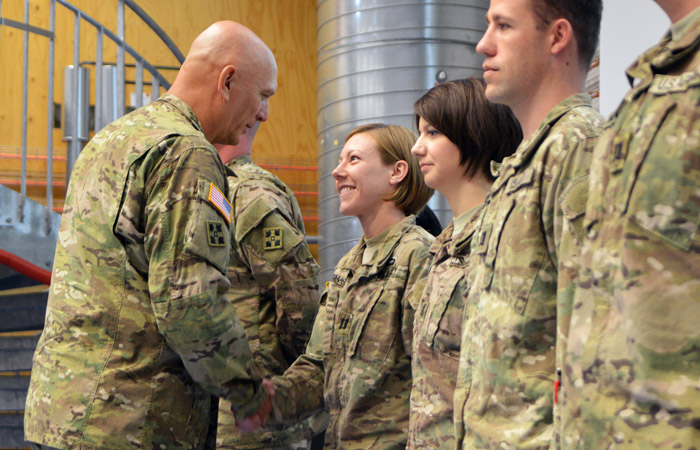 GRAFENWÖHR, Germany (July 10, 2015) – U.S. Army Chief of Staff Gen. Ray. Odierno visited U.S. Soldiers and their commanders in the Grafenwoehr training area to talk to and listen to them, July 9.

Odierno commented on the significance of having Soldiers on the ground in Europe and regionally-aligned forces.

“The ability to solve problems forward is essential to how we will conduct operations in the future. With the Army getting smaller and the fact that we have less forward stationed forces, rotational forces and rotating capabilities are becoming more important,” Odierno told Tarsa.

After eating lunch with Soldiers in the 2nd Cavalry Regiment, or 2CR, dining facility, Odierno was given a tour of the Reed Museum on Rose Barracks by Col. John Meyer, commander of 2CR. Meyer then led the leadership of 2CR in a discussion with Odierno.

Odierno complemented and thanked Soldiers for their hard work and the positive impact their actions are having around the world.

“It is amazing the difference just one American Soldier has on the ground,” he said. “It shows a resolve and a commitment that other nations understand.”

To read the story as it appears on the Army News Service, visit www.army.mil/article/152097.