Octogenarian looks back on more than four decades of employment with U.S. troops in Germany 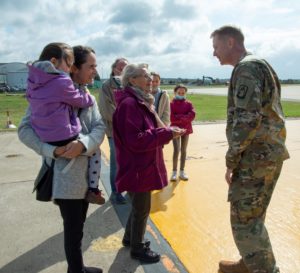 ANSBACH, Germany (Aug. 17, 2021) – After a lifetime spent working for the U.S. Army in Fürth, Germany, Marie Steiger and her late husband Hans, who passed away in February 2021, retired in the mid-1990s with the closing of the Nürnberg Military Community. Now, almost three decades later, Steiger came to visit an American Kaserne one more time.

At 86 years old, Steiger’s big wish was to “once more visit a place where U.S. Soldiers worked, and to find out how things have changed” since she retired. When she mentioned this at home in conversation while looking through old photographs, her granddaughter Nina Scheuerlein took action and arranged a visit to USAG Ansbach.

Together with her son, granddaughter and three great-granddaughters, Steiger came to Katterbach to tour the kaserne. The commander of the 12th Combat Aviation Brigade, Col. Patrick Schuck, took the time to welcome her on the airfield and present her with a unit coin and patch.

“I just want to thank you for the many years that you and you husband dedicated to the American Forces,” said Schuck as he presented the coin. “Together you worked for us for a total of 90 years, we still have a long way to go to catch up.” 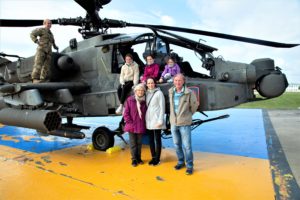 The family then enjoyed a private tour of two helicopters, and moved on to visit Urlas for a look at modern housing and facilities.

Hans Steiger started working as a local national for the U.S. Army in 1950 and quickly rose the ranks, to finally end his career in 1994 as the chief of supply systems. His wife Marie joined the Service Supply Center in 1954 and worked her way up in procurement, where she worked as a supervisor until 1995.

Her customers came from all over Franconia; communities like Kitzingen, Schweinfurt, Würzburg, Nürnberg and Katterbach belonged to her area of responsibility.

“Often pilots from Katterbach came to see me, and we got to talking, and they told me about their concerns. They were young, and I guess they looked at me as a kind of maternal advisor,” said Steiger.

With the looming deployment to the Gulf War in 1990, they would share their worries about going to a war zone. “They were scared, so scared, this was the real thing, and they didn’t know what to expect.” 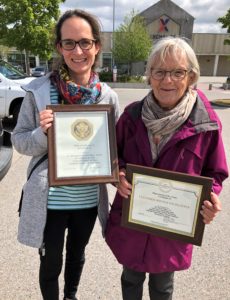 The Steigers received commendations from many of their commanders; Gen. Crosby E. Saint, who served as Commander in Chief, United States Army Europe/Commander, Central Army Group from 1988 to 1992, signed her 40-year employment certificate. Fondly, she remembers working for Gen. John Shalikashvili, whose name was “almost impossible to pronounce” for her and her German co-workers. Shalikashvili was later appointed Chairman of the Joint Chiefs of Staff in 1993.

Steiger’s granddaughter Nina explained how much her grandparents enjoyed working for the U.S. Forces. “This was their life, they loved working for the Americans. My Opi’s office still has his collection of photos, awards and newspaper clippings on the walls.”

Often the couple was invited to functions at the commander’s house: “We always had a general in the community, and the LN supervisors were often invited to his parties. The ladies wore long evening gowns, and the men a tuxedo, it was always so nice at these events.”

Throughout their career, they made lifelong American friends, who they visited in the States, and exchanged letters and Christmas cards with for many years.

When prompted about why she worked for her U.S. employer for such a long time, Steiger had many reasons: “We always felt like we were a part of a bigger cause,” she explained. “The Americans were so easy-going, so pleasant to work with, and we felt like equals.”

“Even back then, in the 60s, it was a well-paying job, our employer was generous, and if you worked hard you had great chances to advance and be promoted.” Steiger continued. “But the best part for me – as a woman – was that I was paid the same as the men doing the same job, and in those days that was very unusual.”

Saying her goodbyes as they were getting ready to leave the garrison, Steiger repeated how impressed she was of her visit. “My only regret is that my Hans can’t be here, he would have loved this so much.”

About the Nürnberg Military Community:

According to http://www.nbg-mil-com.de, the Nürnberg area became part of the Southern Area Command in 1954. A number of redesignations followed. From 1959 to 1965 it was known as Nürnberg Post. After the Northern and Southern Area Command merged in the United States Area Command, the post was designated as Headquarters North Bavaria District, USAACOM, on July 1, 1965. Within the district were five sub-districts: Illesheim, Erlangen, Ansbach, Bayreuth and Bamberg.