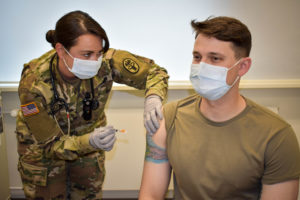 Cpt. Svetlana Connor, Ansbach Army Health Clinic clinical nurse officer-in-charge, has served in the U.S. Army for 12 years, and has been a nurse for seven years. Prior to becoming a nurse, she was a combat medic in the U.S. Army Reserves. She always wanted to go back to college and get her degree in nursing, so as soon as she graduated from Advanced Individual Training, she joined the senior military program for ROTC at North Georgia.

The Calhoun, Georgia native said, she loves being a nurse to give back to the community and active duty population including family members and Army retirees. “I love that aspect of Army nursing. Serving those that have given so much for us and the rest of the population and making them feel a bit better when they are not feeling well.”

Her first job was working with orthopedic trauma patients and a lot of wounded warriors that had received amputations, traumatic amputations. She said that was hard. “But they were so resilient, so happy. They were fighters.” Connor said she had one patient that returned to active duty as a pilot after losing a leg, which as very inspiring to her. She loves being outdoors and hiking, and she also does portrait and nature photography on the side. “I love editing photos.”