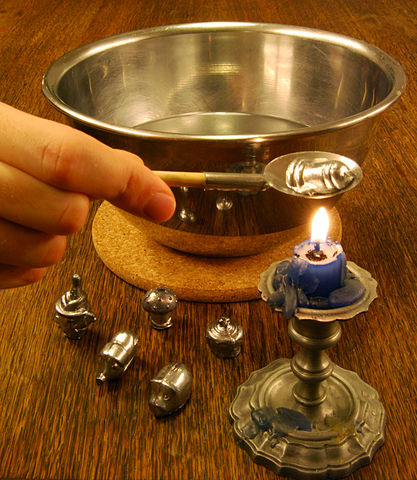 ANSBACH, Germany (Dec. 22, 2016) – New Year’s Eve in Germany is known as Silvester, named after Pope Silvester, who died Dec. 31, 335 A.D. in Rome.  Silvester is celebrated many different ways in Germany, but some of the more popular traditions include:

Bleigiessen (‘lead pouring’): Melted lead is poured into a bowl of cold water and the participants try to read their future in the shape of the cooled lump of lead. Melting kits are sold in any supermarket.

Feuerzangenbowle: A red wine punch, spiced with oranges, cardamom, cinnamon and cloves, and prepared by soaking a sugar cone with rum, setting it aflame and letting the mixture of rum and caramelized sugar drip into the punch – delivering quite the punch. The “flaming fire tongs punch” became popular because of a novel with the same name by Heinz Spoerl and 1944 movie with the German actor Heinz Rühmann.

Superstitions: The motto is, “the way you start the new year, it’s going to go all year.” Old folks tell you to pay off all your debts to avoid accumulating new ones in the New Year; also, take down your laundry from the clothes line, as it may bring bad luck. Good luck symbols are the pig, clover and chimney sweep; little marzipan pigs or chocolate chimney sweeps are often given as gifts. 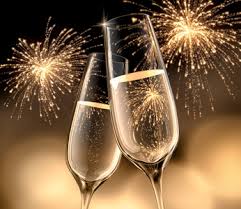 Food: On Silvester food is often served as a buffet, especially when many people celebrate together. It includes lots of fish dishes, like salmon or cold herring salad. Smaller groups enjoy a Fondue or Raclette, where you sit around a table and prepare your dinner together, either by dipping meats, veggies or read in hot oil or cheese (Fondue) or melting a special cheese in small pans on a table oven and eating it with a variety of other foods like potatoes, ham or vegetables (Raclette). Restaurants offer special evenings with a several course dinner and champagne, sometimes a “midnight buffet.”

“Dinner for One:” A 15-minute television sketch about the 80th anniversary of an old British Lady filmed in black and white,  has become a more modern tradition among Germans, and it is shown several times on different TV stations.  At midnight the stations do a countdown show and often display fireworks with classical music in the background.

Fireworks and fire crackers at midnight: Many Germans buy fireworks for the turning of the year; in fact this is the only time of the year they are allowed to ignite fireworks without special permission. The fireworks are only sold between Christmas and New Years Eve and should only be used around midnight on the 31st of December. Every year an estimated 100 million Euros is blown up in smoke for fireworks in Germany alone. In the neighborhoods, people bundle up and go outside to toast with a glass of Sekt (sparkling wine), light their fireworks and wish their family, friends and neighbors a happy and prosperous new year. City people like to gather in prominent and elevated places, like the Nürnberg castle. Most cities with a historical core do not allow private fireworks anymore due to the fire hazard. Fireworks and other pyrotechnic articles are also not permitted at any time on post.