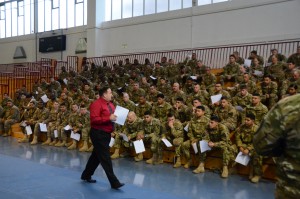 Several garrison agencies had stations around the basketball courts of the fitness center to provide the 3-227th Soldiers, who are coming from Fort Hood, Texas, with the information they need to have a successful rotation at USAG Ansbach.

During a one-day process taking place for different groups of incoming Soldiers, Soldiers received briefings about life in the garrison, and they participated in a round-robin type in-processing. During the round-robin, Soldiers registered in the Installation Access Control System and got their ration cards and driver’s licenses. They also received important information from service providers including the American Red Cross, banking services, Family and Morale, Welfare and Recreation, and more.

USAG Ansbach streamlined the unit’s in-processing to ensure that Soldiers assigned to 3rd Bn., 227th Aviation Regt., are able to contribute to a strong Europe and to reassure U.S. Army Europe’s allies of the U.S.’s commitment to the collective security of NATO.

To read the story as it appears on the Army News Service, visit www.army.mil/article/158520.